Bangladesh at the Vatican 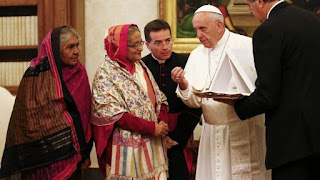 Today, inside the Vatican Apostolic Palace, the Holy Father, Pope Francis received in audience, the Prime Minister of the People's Republic of Bangladesh, Her Excellency, Ms. Sheikh Hasina, who subsequently met with His Eminence, Cardinal Pietro Parolin, Secretary of State, accompanied by Monsignor Antoine Camilleri, Under-Secretary for Relations with States.

During the cordial discussions, the good bilateral relations were evoked, and satisfaction was expressed for the Holy Father’s recent apostolic trip to Bangladesh and for the keen participation in the event on the part of the Bangladeshi people, including many non-Catholics.

Attention then turned to the contribution of the Church in the country, especially in the field of education, and in the effort of the State in promoting the peaceful coexistence of the various religious communities and in the defence of minorities and refugees, expressing appreciation for the reception of the Rohingya and hope for a just and lasting solution to their ordeal.
at 17:01