General Audience on the presentation of gifts

This morning's General Audience, which was originally supposed to take place in Saint Peter's Square, began at 9:40am local time (3:40am EST) in the Paul VI Hall due to inclement weather.  The Holy Father met there with groups of pilgrims and the faithful from Italy and from every corner of the world.  The faithful and pilgrims who could not find room in the Paul VI Hall were able to follow the audience from inside Saint Peter's Basilica.  The Holy Father went to the Basilica after the audience to greet those who were gathered there.

In his speech, the Pope continued his catechesis on the Mass, adding his first meditation on the Liturgy of the Eucharist: focused on the presentation of gifts.

As usual, following the catechesis, summaries of the Holy Father's teaching were provided in various languages and His Holiness offered greetings to each linguistic group of pilgrims in attendance. 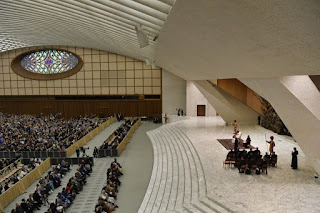 We continue with the catechesis on the Mass.  The Liturgy of the Word - which I focused on during recent catecheses - is followed by the other constitutive part of the Mass, which is the Liturgy of the Eucharist.  In this second part, through holy signs, the Church continually makes present the Sacrifice of the new covenant which was sealed by Jesus on the altar of the cross (cf Sacrosanctum Concilium, 47).  The cross was the first Christian altar, and when we come close to the altar to celebrate Mass, our memory is drawn to the altar of the cross where the first sacrifice took place.  The priest, who represents Christ at the Mass, does what the Lord himself did, that which he entrusted to the disciples at the Last Supper: he took the bread and the chalice, gave thanks, gave them to his disciples and said: Take it, eat ... drink: this is my body ... this is the chalice of my blood.  Do this in memory of me.

Obedient to the command of Jesus, the Church has arranged the Liturgy of the Eucharist in moments that correspond to the words and the gestures that Jesus performed on the night before his passion.  In this way, in the preparation of the gifts, the bread and wine are brought to the altar, the elements that Christ took into his hands.  In the Eucharistic prayer, we give thanks to God for the work of redemption and the offerings become the Body and Blood of Jesus Christ.  This is followed by the breaking of the bread and distribution of Communion, while we re-live the experience of the Apostles who received the Eucharistic gifts from the hands of Christ himself (cf General Instruction of the Roman Missal, 72).

The first of Jesus gestures - he took the bread and the chalice of wine - therefore corresponds to the preparation of the gifts.  This is the first part of the Liturgy of the Eucharist.  It is good to have some of the faithful who present the bread and wine to the priest, because this signifies the spiritual offering of the Church who is gathered there for the Eucharist.  It is a good thing to see the faithful bringing bread and wine to the altar.  Although today, the faithful no longer bring their own bread and wine to the altar destined for the Liturgy, nevertheless the rite of the presentation of these gifts preserves its value and spiritual significance (GIRM, 73).  And in this regard, it is significant that, at the ordination of a new priest, the Bishop, when he presents the bread and wine to him, says: Receive the offerings from the holy people of God for the Eucharistic sacrifice (Roman Pontifical - Ordination of bishops, priests and deacons).  It is the people of God who bring the offering, the bread and wine, the great offerings for the Mass!  Therefore, in the signs of bread and wine, the faithful people place the sacrifice itself into the hands of the priest, who places them on the altar or the table of the Lord, which is the focal point of the Liturgy of the Eucharist (GIRM, 73).  Therefore, the centre of the Mass is the altar, and the altar is Christ; we always need to look to the altar which is the focus of the Mass.  In the fruit of the earth and the work of our hands, the commitment of the faithful is therefore offered in order to make themselves, obedient to the divine Word, a sacrifice that is pleasing to God the Almighty Father, for the good of his holy Church.  In this way, the life of the faithful, their sufferings, their prayer, their work, are all united in the work of Christ and in his total offering, and in this way, they acquire new value (Catechism of the Catholic Church, 1368).

Certainly, our offerings are small things, but Christ needs these small things.  The Lord asks little of us, and he gives us so much.  He asks so little of us.  In our ordinary lives, he asks for our good will; he asks for our open hearts; he asks us to want to be better so that we can welcome Him who offers himself to us in the Eucharist; he asks us to present these symbolic offerings which subsequently become his body and his blood.  An image of this oblative offering of prayer is represented in the incense which, burned up in fire, releases perfumed smoke which rises on high: incensing the offerings, as we do on liturgical feast days, incensing the cross, the altar, the priest and the priestly people therefore visibly demonstrates the bond that unites all these realities to the sacrifice of Christ (cf GIRM, 75).  And don't forget: there is the altar which is Christ, but always in reference to the first altar which is the cross, and on the altar which is Christ, we place the smallness of our gifts, the bread and wine that then become Jesus himself who offers himself to us.

All of this is also expressed in the prayers prayed over the offerings.  The priest asks God to accept the gifts that the Church offers, invoking the fruit of the admirable exchange between our poverty and his wealth.  In the bread and wine, we present the offerings of our lives, so that they may be transformed by the Holy Spirit in the sacrifice of christ and thus become with him one spiritual offering that is pleasing to the Father.  As the preparation of the gifts concludes, we are thus prepared for the Eucharistic Prayer (cf GIRM, 77).

The spirituality of self-giving, which we learn at this moment of the Mass, can illuminate our days, the relationships we have with others, the things that we do, the sufferings we encounter; they can help us to build an earthly city illuminated by the light of the gospel.

The Holy Father's catechesis was then summarized in various languages, and His Holiness offered greetings to each group of pilgrims in attendance.  To English-speaking pilgrims, he said:

I greet the English-speaking pilgrims and visitors taking part in today’s Audience, particularly those from England, Denmark, Norway, Sweden, Slovakia and the United States of America. With prayerful good wishes that this Lent will be a time of grace and spiritual renewal for you and your families, I invoke upon all of you joy and peace in our Lord Jesus Christ. God bless you! 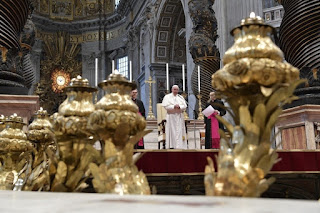 At the conclusion of the Audience, the Holy Father went to the Basilica of Saint Peter to greet the people who were gathered there.  Standing in front of the main altar, he said:

Thank you!  Thank you very much for your patience, you have waited until now.  May the Lord bless you, bless you for your patience.  But I think that it is better to be here than it would be to be outside in the cold, no?  Really?  Yes?  Good.  Now, I will bless you, but first, let us pray to Our Lady.