The Holy Father has been meeting this week (Monday, Tuesday and today) with the Cardinal Consultors.  At 1:00pm today (7:00am EST), the Director of the Holy See Press Centre, Greg Burke held a briefing concerning the XXIII meeting of the Council of Cardinals with the Holy Father. 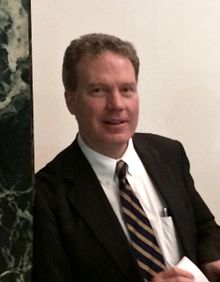 The Council of Cardinals met for three days: Monday, 26; Tuesday, 27 and Wednesday, 28 February.  All the members of the Council were in attendance except for Cardinal George Pell.  His Eminence, Cardinal Laurent Monsengwo Pasinya however, arrived on Monday evening due to the cancellation of his flight due to bad weather.  The Holy Father was absent from the meetings this morning due to the General Audience.

The working sessions were held in the mornings from 9:00am to 12:30pm and in the afternoons from 4:30pm to 7:00pm and various themes were discussed, including the theological status of the Episcopal Conferences, human resources, cost controls for the expenses faced by the Holy See and the protection of minors.  In addition, the Cardinals studied the Dicasteries for Integral Human Development, for Oriental Churches and for the Evangelization of Peoples.

The reflection on the theological status of the Episcopal Conferences was inspired by number 32 of Evangelii Gaudium:  The Second Vatican Council stated that, like the ancient patriarchal Churches, episcopal conferences are in a position 'to contribute in many and fruitful ways to the concrete realization of the collegial spirit'. Yet this desire has not been fully realized, since a juridical status of episcopal conferences which would see them as subjects of specific attributions, including genuine doctrinal authority, has not yet been sufficiently elaborated. Excessive centralization, rather than proving helpful, complicates the Church’s life and her missionary outreach.

It is a matter of re-reading the Motu proprio Apostolos suos, in a spirit of healthy decentralization, about which the Pope has often spoken, reaffirming the fact that it is he who maintains unity in the Church.

His Eminence, Cardinal Marx presented the theme of human resources by speaking with the Council of Cardinals about the Council for the Economy, which has the duty of studying proposals which will define the competences for a control set for human resources.

Cardinal Marx also related his positive progress in the area of presenting the balance sheets, the containment of costs and reductions of the Holy See's existing deficit.

In this respect, the Council for the Economy has decided to create guidelines for the various Entities of the Holy See in an effort to reduce related costs.

The Cardinals also discussed various options for the Congregation for the Doctrine of the Faith so that cases of abuse of minors can be processed in as brief a period of time as possible.

In addition, the Cardinals heard a report presented by the Prefect of the Dicastery for Integral Human Development, His Eminence, Cardinal Peter Kodwo Appiah Turkson concerning the progress accomplished by the Dicastery, and conducted further reflections concerning the Congregation for the Oriental Churches and for the Evangelization of Peoples.