Pastoral visit in the Northern region of Rome 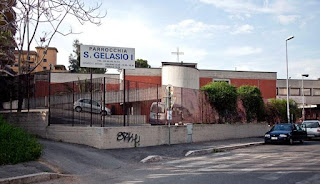 This afternoon in Rome, the Holy Father, Pope Francis paid a pastoral visit to the Roman parish of San Gelesius I Pope, which is entrusted to the priests and the ecclesial family of the Church-World Missions, located in the Ponte Mammolo neighbourhood.

Upon his arrival, at 3:45pm, the Pope was welcomed by Archbishop Angelo de Donatis, the Vicar General for the Diocese of Rome; by His Excellency, Guerino di Tora, Auxiliary Bishop for the Northern sector of the Diocese; by the pastor of the parish, Father Giuseppe Raciti and by the associate pastor, Father Alfio Carbonaro.

At the sports field, Pope Francis met with young children and those who are being catechized, with youth from the oratory and members of their families; and later, in the theatre, he greeted the sick and the elderly.  Then, in various rooms throughout the parish, he met the poor and those who are working with Caritas to assist them, with volunteers working with a pharmaceutical and food bank.  His Holiness then paused to speak with two young people (one who is 18 years old and the other who is 25) from the Republic of Gambia who are being housed by the parish.  Finally the Pope heard the confessions of a few penitents.

At 6:00pm local time, the Holy Father presided over the Eucharistic celebration inside the church.  Concelebrating with the Pope were other priests from the XI Prefecture, former pastora and a few priests who are friends of the community.  Following the proclamation of the second reading by a blind parishioner and the proclamation of the gospel, the Holy Father shared an unscripted homily.

At the conclusion of the Mass, the Holy Father returned to the Vatican.