General Audience on the Creed and the Prayers of the Faithful

This morning's General Audience began at 9:45am in Saint Peter's Square, where the Holy Father, Pope Francis met with groups of pilgrims and the faithful from Italy and from every corner of the world.

Before making his way to the General Audience in Saint Peter's Square, the Pope met with the sick who were gathered in the Paul VI Hall due to inclement weather.

In his speech, the Pope continued his catechesis on the Mass, adding a meditation on the Liturgy of the Word: focusing on the Creed and the Prayers of the Faithful (using the gospel passage from John 15:7-8). 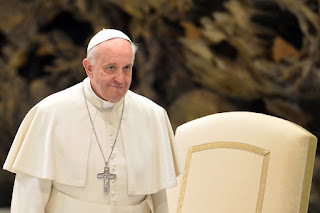 Greetings of the Holy Father, Pope Francis
to the sick gathered in the Paul VI Hall

Recitation of the Hail Mary ...

And pray for me!  Don't forget, eh!  Have a great audience.  And afterwards too.  Thank you! 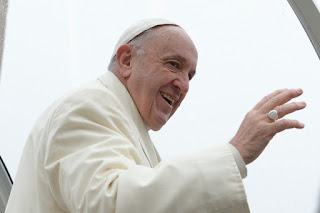 Good morning, even if this day is a bit ugly.  But if our souls are joyous, it is always a good day.  So, good morning!  Today, the audience will take place in two parts: a small group of the sick are in the Paul VI Hall and we are here.  But we can see them and they can see us on the jumbotron.  Let us greet them with applause.

We continue with the Catechesis on the Mass.  Listening to the biblical readings, and the homily that follows, what are we responding to?  We are responding to a right: the spiritual rights of the people of God to receive the treasure of the Word of God in abundance (cf Introduction to the Lectionary, 45).  When we go to Mass, every one of us has the right to abundantly receive the Word of God that is well read, well spoken and then, well explained in the homily.  This is a right!  And when the Word of God is not well read, not preached with fervour by the deacon, the priest or the bishop, the faithful are missing out on one of their rights.  We have the right to hear the Word of God.  The Lord speaks to everyone, pastors and the faithful.  He knocks at the hearts of all those who participate in the Mass, everyone in every condition of life, being, situation.  The Lord consoles, calls, arouses sprouts of new and reconciled life.  All this is the result of his Word.  His Word knocks at our hearts, calls to our hearts!

Therefore, after the homily, a period of silence allows the seed that has been received to take root in our hearts, so that our intentions may be formed by the presence of the Spirit which has been suggested to each one of us.  Silence after the homily.  A good period of silence should be observed so that everyone can think about what we have heard.

Following this silence, how does the Mass continue?  A personal response of faith is part of the Church's profession of faith, expressed in the Creed.  We all recite the Creed during the Mass.  Recited by everyone in the assembly, the Creed demonstrates the common response to that which we have all heard in the Word of God (cf Catechism of the Catholic Church, 185-197).  There is a vital link between listening and faith.  They are united.  In fact, this - faith - is not born in the fantasy of the human mind but, as Saint Paul says: it comes from listening, listening to the word of Christ (Rom 10:17).  Faith is therefore fed by listening and it leads to the sacraments.  So, the recitation of the Creed allows the liturgical assembly to return, to meditate and to profess the great mysteries of faith, before they celebrate the Eucharist (General Instruction of the Roman Missal, 67).

The Creed, by which we profess our faith, connects the Eucharist to Baptism, received in the name of the Father and of the Son and of the Holy Spirit, and reminds us that we understand the Sacraments in the light of the Church's faith.

The response to the Word of God that has been welcomed in faith is then expressed in common prayer, known as the Universal prayers, since they involve the needs of the Church and the world (cf GIRM, 69-71; Introduction to the Lectionary, 30-31).  They are also known as the Prayers of the Faithful.

The Fathers of Vatican II wished to restore this prayer following the gospel and the homily, especially on Sundays and on Feast days in order that with the participation of the people, prayers are offered for the holy Church, for those who govern us, for those who find themselves in various needs, for all peoples and for the salvation of the whole world (Sacrosanctum Concilium, 53; cf 1 Timothy 2:1-2).

Therefore, under the guidance of the priest who introduces and concludes the prayer, the people exercise their baptismal priesthood by offering to God prayers for the salvation of all (GIRM, 69).  And after each petition, offered by the deacon or by a lector, the assembly unites its voice to invoke: Hear us, O Lord or Lord, hear our prayer.

What was the response of the man to whom Jesus had gone to speak this word: everything is possible for those who believe?  He said: Lord, I believe.  Help my unbelief.  This is the spirit in which we should offer our prayer: Lord, I believe; help my unbelief.  The pretences of worldly logic do not point toward heaven, just as questions that are intended for self-centred reasons go unanswered (cf Gc 4:2-3).  The intentions for which the faithful are invited to pray must give voice to the concrete needs of the ecclesial community and the world, avoiding the use of conventional and short-sighted formulae. The universal prayer, which concludes the Liturgy of the Word, challenges us to make God's way of seeing things our own, for He takes care of all his children and so should we.

The Holy Father's catechesis was then summarized in various languages, and His Holiness offered greetings to each group of the faithful in attendance.  To English-speaking visitors, he said:

I greet the English-speaking pilgrims and visitors taking part in today’s Ash Wednesday Audience, particularly those from England, Ireland, China and the United States of America. I wish you and your families a holy and fruitful season of Lent, and I invoke upon you the grace and peace of Christ our Lord. May God bless you all!
at 08:21