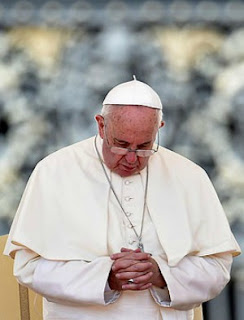 A very special private meeting took place this morning in the Vatican between Pope Francis and some victims of religious persecution from different parts of the world. Pope Francis prayed for victims of religious persecution across the world as he met with the husband and daughter of Asia Bibi and with Rebecca Bitrus. Asia Bibi is a Pakistani Christian woman who has been held in the Multan female prison, in Punjab since 2009, sentenced to death for alleged blasphemy; Rebecca Bitrus is a young Nigerian woman who was abducted and held captive by Boko Haram Jihadists for two years.

During the private meeting in the Vatican, Pope Francis prayed together with those present, putting faith and hope at the centre of this very special occasion. Some of those present revealed that Asia Bibi’s youngest daughter Eisham prayed in Urdu, whilst Rebecca prayed in her own Hausa dialect, giving life to an extraordinary moment of sharing and emotional intensity.

Speaking to the Pope, Eisham reportedly told him she was bringing her mother’s love to him. The meeting was organized by Aid to the Church in Need, a papal foundation that supports suffering Christians around the world.

After the encounter, the President of ACN Italy, Alessandro Mondeduro, said the Pope was deeply moved by the occasion and described Asia Bibi and Rebecca as women martyrs: marvellous examples for a civilization that is so afraid of pain.
at 09:02