General Audience on the gospel and the homily

This morning's General Audience began at 9:35am in the Paul VI Hall, where the Holy Father, Pope Francis met with groups of pilgrims and the faithful from Italy and from various parts of the world.

In his teaching, the Pope continued his catechesis on the Mass, adding a second meditation on the Liturgy of the Word: the gospel and the homily.

After having summarized his catechesis in various languages, the Holy Father offered particular greetings to each group of the faithful in attendance.  He then issued a call for awareness and prayer on the World Day of Prayer and Awareness against Human Trafficking, which will be observed tomorrow, on the liturgical memorial of Saint Josephine Bakhita; and greetings to the athletes who will be participating in the XXIII Winter Olympics which will begin in PyeongChang (South Korea) on Friday 9 February. 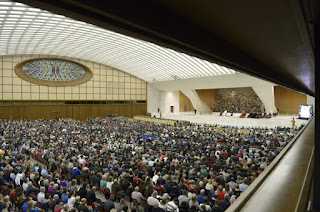 We continue with the catechesis on the Mass.  We have arrived at the Readings.

The dialogue between God and his people, developed in the Liturgy of the Word during the Mass, reaches its culmination in the proclamation of the gospel.  It is preceded by the chanting of the Alleluia - or during Lent, by another acclamation - with which the assembly of the faithful welcomes and greets the Lord who is about to speak in the gospel (General Instruction of the Roman Missal, 62).  Just as the mysteries of Christ illuminate all of biblical revelation, so, in the Liturgy of the Word, the gospel constitutes the light which helps us to understand the sense of the biblical texts which have preceded it, both in the Old and the New Testaments.  In effect, Christ is the centre and the fullness of all of Scripture and all liturgical celebrations (Introduction to the Lectionary, 5).  Jesus Christ is always at the centre, always.

Therefore, the liturgy itself distinguishes the gospel as separate from the other readings and surrounds it with particular honour and veneration (GIRM, 60, 134)  In fact, the reading of the gospel is reserved to ordained ministers, who concludes by kissing the book; those who hear the word stand up and trace the sign of the cross on their foreheads, on their lips and on their breasts; the candles and incense honour Christ and, through the reading of the gospel, his powerful word resonates.  In all these signs, the assembly recognizes the presence of Christ who shares with them the good news which converts and transforms hearts.  The gospel is a direct discourse that takes place, as the acclamations attest, with which we respond to the proclamation: Glory to you, O Lord and Praise to you, O Christ.  We stand up in order to listen to the gospel: it is Christ who is speaking there.  Therefore, we are attentive, because this is a direct conversation.  The Lord is speaking to us.

Therefore, during the Mass we do not read the gospel in order to know how things have turned out, but we listen to the gospel in order to be aware of what Jesus has done and said; and this Word is life, the Word of Jesus in the gospel is life and finds a place in our hearts.  For this reason, listening to the gospel is very important, with open hearts, because this is the living Word.  Saint Augustine wrote that Christ's mouth is the gospel.  He reigns in heaven, but he does not cease to speak on earth (Sermon 85, 1: PL 38, 520; cf also the Treatise on the gospel of John: XXX, I: PL 35, 1632; CCL 36, 289).  If it is true that in the liturgy, Christ also proclaims the gospel (Sacrosanctum Concilium, 33), it follows that by participating in the Mass, we must respond.  We listen to the gospel and we must give a response, in the way we live our lives.

In order to bring his word to fruition, Christ also uses the words of the priest who, following the gospel, shares the homily (GIRM, 65-66; Introduction to the Lectionary, 24-27).  Strongly recommended by the Second Vatican Council as part of the same document on the liturgy (SC, 52), the homily is not a circumstantial speech - nor a catechesis such as I am sharing right now - neither a conference or a reading.  The homily is something else.  What is the homily?  It is a continuation of the dialogue that has already begun between the Lord and his people (Evangelii gaudium, 137) so that they may find fulfillment in their lives.  The authentic exegesis of the gospel is our holy life!  The world of God culminates its journey by taking flesh in us, translating itself into works, as was the case in the lives of Mary and of the Saints.  Remember what I said the last time, the Word of God enters into our ears, arrives in our hearts and finds its way into our hands, in good works.  The homily also follows the Word of God and is also part of the help that we receive so that the Word of God can find its way into our hands, after it passes through our hearts.

I have already spoken about the issue of the homily in the Exhortation Evangelii gaudium, where I recalled the liturgical context: it demands that preaching should guide the assembly, and the preacher, to a life-changing communion with Christ in the Eucharist (EG, 138).

The one who delivers the homily must perform his ministry well - the one who preaches, the priest or the deacon or the bishop - by offering a true service to all those who participate at the Mass, but those who are listening to it must also do their part.  First of all, they should pay due attention, assuming the right internal dispositions without subjective pretexts, knowing that every preacher has both merits and limits.  If there is reason at times to be bored because sometimes the homily is too long or not focused or difficult to understand, at other times there are obstacles that hinder us from acting.  And the one who does the homily should be conscious of the fact that he is not doing something of his own; he is preaching, giving voice to Jesus, preaching the Word of God.  The homily should be well prepared, it should be brief, brief!  A priest told me that he once went to another city where people were living and a father told him: You know, I am happy, because with my friends I have found a church where the Mass is celebrated without a homily!  And how often do we see that some people fall asleep during the homily, others chat or go outside to smoke a cigarette ... For this reason, please, keep the homily brief but well prepared.  And how do we prepare a homily, dear priests, deacons, bishops?  With prayer, by studying the Word of God and by offering a clear and brief synthesis.  It should not be longer than 10 minutes, please.

In conclusion, we can say that in the Liturgy of the Word, through the gospel and the homily, God is in dialogue with his people, who listen with attention and veneration and, at the same time, they recognize Him as present and at work.  Therefore, if we listen to the good news, through it we will be converted and transformed, able to change ourselves and the world around us.  Why?  Because the Good News, the Word of God enters through our ears, travels to our hearts and then to our hands so that we can do good works.

The Holy Father's catechesis was then summarized in various languages and he offered greetings to each group of pilgrims in attendance.  To English-speaking pilgrims he said:

I greet the English-speaking pilgrims and visitors taking part in today’s Audience, particularly those from England, the Philippines and the United States of America. Upon all of you, and your families, I invoke the joy and peace of our Lord Jesus Christ. God bless you! 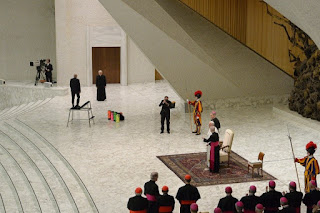 His Holiness then issued the following calls for prayer:

Tomorrow, 8 February, the liturgical memorial of Saint Josephine Bakhita, will also be the World Day of Prayer and Awareness against Human Trafficking.  This year's theme is Migration without trafficking.  Yes to freedom!  No to trafficking!  Having few possibilities for regular routes, many migrants decide to venture out into other paths, where abuses of all kinds, exploitation and slavery are often waiting.  Criminal organizations, dedicated to human trafficking, use these migratory routes to hide their own victims among other migrants and refugees.

Therefore, I invite everyone, citizens and institutions, to join forces in order to prevent trafficking and to guarantee protection and help for victims.  Let us all pray that the Lord may convert the hearts of traffickers - this is a horrible word: human traffickers - and give hope of regaining freedom to those who suffer because of this shameful plague. 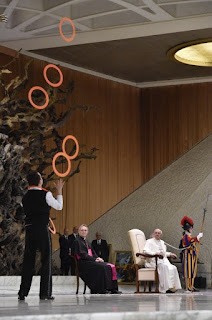 The day after tomorrow, on Friday 9 February, the XXIII Winter Olympic Games will begin in the city of PyeongChang, in South Korea, with 92 countries participating.

This year, the traditional Olympic truce takes on a special importance: delegations from both Koreas will march together under the same flag and will compete as members of the same team.  This fact gives hope for a world in which conflicts can be resolved peacefully through dialogue and mutual respect, something that sport also teaches us to do.

I offer my greetings to the International Olympic Committee, to all the athletes who are participating in the PyeongChang Games, to the Authorities and the people on the Korean peninsula.  I accompany them all with my prayers while I renew the commitment of the Holy See to supporting every useful initiative in favour of peace and toward encounters among peoples.  May these Olympics be a great celebration of friendship and sports!  May God bless you and protect you!
at 20:11