In his speech, the Pope continued the cycle of catechesis on the Beatitudes, adding his meditation on the eighth and final one: Blessed are those who are persecuted for the sake of righteousness, for theirs is the kingdom of heaven (Mt 5: 10). 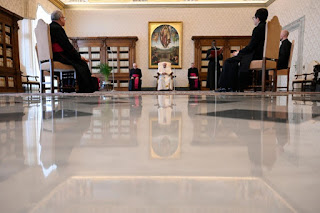 With today's audience, we conclude our reflections on the gospel Beatitudes.  As we have heard, the joy that will be the reward of those who are persecuted is proclaimed in this final Beatitude.

This Beatitude proclaims the same joy that the first one did: the kingdom of heaven belongs to those who are persecuted and to those who are poor in spirit; in this way, we understand that we have reached the end of a unified path that has been pointed out in the preceding proclamations.

Poverty of spirit, weeping, meekness, a thirst for holiness, mercy, purification of the heart and the works of peace can lead us to be persecuted for Christ's sake, but in the end, this persecution is a cause for joy and great reward which will be ours in heaven.  The path of the Beatitudes is an Easter journey that leads from a life lived according to the world toward a life that is lived according to God, from an existence that is guided by the flesh - which is to say by egoism - to one that is guided by the Spirit.

The world, with its idols, its compromises and its priorities, cannot approve of this type of existence. The structures of sin (cf Speech to participants who took part in the workshop entitled New forms of fraternal solidarity, inclusion, integration and innovation, 5 February 2020 which was organized by the Pontifical Academy for Social Sciences) often produced by the human mentality, as extraneous as they are to the Spirit of truth that the world cannot receive (cf Jn 14: 17), cannot therefore but refuse poverty or meekness or purity and declare life according to the Gospel as an error and a problem, as something to be marginalized. Such people think: These are idealists or fanatics ...  This is what they think.

If the world survives on the basis of money, anyone who demonstrates that life can be fulfilled in gift and renunciation becomes a nuisance for the system of greed. This word nuisance is key, because the only Christian testimony, which does so much good for many people because we follows it, is that we annoy those who have a worldly mentality. They understand it as a rebuke. When holiness appears and the life of the children of God emerges, in that beauty there is something uncomfortable that calls for a position: either to let oneself be questioned and opened to goodness or to refuse that light and harden the heart, even to the point of opposition and fury (cf Wis 2: 14-15). It is curious, it attracts attention to see how, in the persecution of martyrs, hostility increases to the point of fury. It is enough to remember the persecutions of the last century, of European dictatorships to understand how this fury against Christians can arise, fury against Christian witness and against the heroism of Christians.

But this shows that the drama of persecution is also the place of liberation from subjection to the world's success, vainglory and compromises. What is it that rejoices in those who are rejected by the world because of Christ? They rejoice that they have found something worth more than the whole world. In fact what advantage is there that a man gains the whole world and loses his life? (Mk 8,36). What advantage is there?

It is painful to remember that, at this moment, there are many Christians who are suffering persecution in various areas of the world, and we must hope and pray that their tribulations will be stopped as soon as possible. There are many: today's martyrs are more than the martyrs of the first centuries. We express our closeness to these brothers and sisters: we are one body, and these Christians are the bleeding members of the body of Christ which is the Church.

But we must also be careful not to read this Beatitude in a victimizing, self-pitying tone. In fact, contempt for men is not always synonymous with persecution: just shortly after Jesus says that Christians are the salt of the earth, and warns against the danger of losing our flavour, otherwise salt is not good for any purpose other than to be thrown away and trampled under foot (Mt 5: 13). Therefore, there is also a contempt which is our fault when we lose the flavour of Christ and of the Gospel.

We must be faithful to the humble path of the Beatitudes, because this is what leads to being of Christ and not of the world. It is worth remembering the path of Saint Paul: when he thought he was righteous he was in fact a persecutor, but when he discovered that he was a persecutor, he became a man of love, who happily faced the suffering of the persecution he suffered (cf Col 1: 24).

Exclusion and persecution, if God grants us grace, make us resemble Christ crucified and, by associating us with his passion, they are the manifestation of new life. This life is the same as that of Christ, who for us men and for our salvation was despised and rejected by men (cf Is 53: 3; Acts 8: 30-35). Welcoming his Spirit can lead us to have so much love in our hearts that we offer life for the world without compromising on its deceptions and accepting its refusal. Compromises with the world are the danger: the Christian is always tempted to make compromises with the world, with the spirit of the world. This - rejecting compromises and going down the path of Jesus Christ - is the life of the Kingdom of heaven, the greatest joy, true joy. And then, in persecutions there is always the presence of Jesus who accompanies us, the presence of Jesus who comforts us and the strength of the Spirit who helps us to go forward. Let us not be discouraged when a life consistent with the Gospel attracts persecution from people: the Spirit who supports us on this path is always present.
Testo originale nella lingua italiana

The Holy Father's catechesis was then summarized in various languages and His Holiness offered greetings to each group of those who were following along.  To French-speaking viewers, he said:

I greet the English-speaking faithful joining us through the media. In the joy of the Risen Christ, I invoke upon you and your families the loving mercy of God our Father. May the Lord bless you!

I cordially greet all German believers. May the divine power of the risen Christ, of whom we are members, keep the joy of the gospel and the power to truly testify to it alive within us. May the Lord accompany you with His peace.

I cordially greet the Spanish-speaking faithful who are following this catechesis through the media. I encourage you to follow the path of the Beatitudes, finding life by remaining close with those who are suffering, particularly in these times of adversity and difficulty. The Lord will grant you to experience, in the midst of your circumstances, a great joy and inner peace. May God bless you.

I greet Portuguese-speaking listeners and entrust your good life and that of your families to the Good Lord. Pray also for me! May your families come together daily to pray the rosary under the eyes of the Virgin Mother, so that the oil of faith and joy that flows from the life of all your family members, in communion with God, will never run out! Thank you!

I salute all the Arabic-speaking believers who are following this interview on social media. The Beatitudes are a path of holiness which we travel in order to become true disciples of Christ. It is the only way to become like him, to enjoy his kingdom, and to have real joy. God bless you and keep you safe from the evil one!

Dear Poles, I cordially greet each of you and your families. The day after tomorrow, we will begin the month of May, Mary's month. Staying at home because of the pandemic, let's use this time to rediscover the beauty of the rosary and the tradition of May services. With your families and individually, look to the face of Christ and the heart of Mary at all times. Let her motherly intercession help you survive this special trial. I bless you with all my heart.

I greet the Italian-speaking faithful. Today we celebrate the Feast of Saint Catherine of Siena, co-patron of Italy. This great female figure drew from her communion with Jesus the courage of action and that inexhaustible hope that supported her in the most difficult hours, even when everything seemed lost, this union allowed her to influence others, even at the highest civil and ecclesiastical levels, with the strength of her faith. May her example help each one of us to know how to unite, with Christian coherence, an intense love of the Church, with effective concern for the civil community, especially in this time of trial. I ask Saint Catherine to protect Italy during this pandemic; and may she protect Europe, because she is the patron saint of Europe; may she protect all of Europe so that it remains united.

I address a special thought to young people, the elderly, the sick and newlyweds. I urge everyone to be witnesses of the risen Christ who shows his disciples the glorious wounds of his Passion. I cordially bless you.
at 20:30