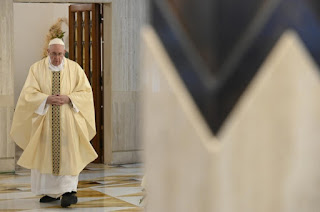 In many places, people are feeling the effects of this pandemic: there are many families who are in need, who are hungry, and unfortunately there are many groups of people who are offering help but who are using other people.  This is another pandemic.  A social pandemic: families of peoples who have daily work, or unfortunately who have to work illegitimately, who cannot work and do not have any food to eat ... and they have children.  And then, those who are users take away the little that others have managed to find.  Let us pray.  Let us pray for these families, for those little children and for their families, for the dignity of these families ... and let us also pray for those people who take advantage of others: may the Lord touch their hearts and convert them. 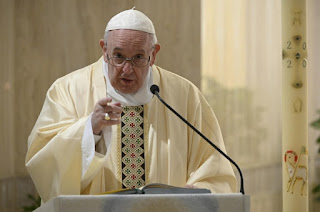 Homily of the Holy Father, Pope Francis
during the Mass celebrated on 23 April 2020

The first reading continues the story that began with the healing of the lame man which took place at the Beautiful Gate of the Temple.  The Apostles were taken to the Sanhedrin, then they were sent to prison, then an angel freed them.  And this morning, on that very morning, they were supposed to leave the prison cell in order to be judged but they had been freed by an angel and they were preaching in the Temple (cf Acts 5: 17-25).

In those days, the commander and the attendants led the apostles and presented them to the Sanhedrin (Acts 5: 27); they went and took them from the Temple, and took them to the Sanhedrin.  And there, the high priest rebuked them: Did we not expressly prohibit you from teaching in that name? (Acts 5: 28) - which is to say the name of Jesus - and you, you have filled Jerusalem with your teachings and you have sought to make this man's blood fall upon us (Acts 5: 28).  Because the Apostles, above all Peter and John were rebuking the leaders, the priests, of having killed Jesus.  And so Peter responded, together with the Apostles, with this story: We must obey God, we are obedient to God and you are guilty of this (cf Acts 5: 29-31).  And they accused them, but with courage, with frankness ... so much so that we might wonder: Is this the same Peter who denied Jesus?  The same Peter who was so afraid, the same Peter who was also a coward? How could it be that he ended up here?  And he himself ended up saying: Of these facts, we are witnesses, we and the Holy Spirit who is with us, the Spirit that God has given to those who obey him (cf Acts 5: 32).  What path did Peter follow in order to get to this point, to achieve this level of courage, this frankness, to achieve this ability to be vulnerable?  It was because he could make compromises, and say to the priests: Rest assured, we will go, we will speak for a while in hushed tones, we will never make accusations in public but you must leave us in peace ... and they achieved a compromise.

Throughout history, the Church has had to do this on many occasions in order to save God's people.  And many times, we have even done this to save ourselves - not the Holy Church, but her leaders.  Compromises can be good and they can be bad.  But it is possible to resolve situations with compromises.  No!  Peter said: No compromises.  You are guilty (cf Acts 5: 30), and with such courage.

And how did Peter arrive at that point?  Because he was an enthusiastic man, a man who loved with strength, even a fearful man, a man who was open to God to the point where God revealed to him the truth that Jesus is the Christ, the Son of god, but shortly after that - immediately - he allowed himself to fall into temptation and to say to Jesus: No, Lord, not down that path: let us go down another path: redemption without the Cross.  And Jesus called him Satan (cf Mk 8: 31-33).  This was Peter who went from temptation to grace, Peter who was capable of kneeling before Jesus and saying to him: Go away from me, for I am a sinner (cf Lk 5: 8), and then also capable of trying to get by without being noticed, and so that he would not end up in prison, chose to deny Jesus (cf Lk 22: 54-62).  This is an unstable Peter, because he was very generous and also very weak.  What is his secret, what strength did Peter possess in order to be like that?  There is a little verse that can help us with this.  Before the Passion, Jesus said to the Apostles: Satan has sought after you in order to sift you like wheat (Lk 22: 31).  This is the moment of temptation: You will be like this, like wheat.  And he said to Peter: And I am praying for you, 'that your faith will not fail you' (Lk 22: 32).  This is Peter's secret; Jesus' prayer.  Jesus prayed for Peter, that his faith would not fail him and so that he could - this is what Jesus said - confirm his brothers in faith.  Jesus prayed for Peter.

This is what Jesus did for Peter, and he does the same for all of us.  Jesus prays for us; he is praying before the Father.  We are accustomed to asking Jesus to give us this grace or that grace, to help us, but we are not used to contemplating Jesus who makes us seen and known to the Father, who presents our wounds to the Father.  We are not used to thinking of Jesus as interceding for us, of Jesus as praying for us.  And Peter was able to walk that road, to move from being cowardly to being brave, with the help of the Holy Spirit, thanks to the prayer of Jesus.

Let us think about this a bit.  Let us turn to Jesus, let us thank him for the fact that he is praying for us.  Jesus is praying for each and every one of us.  Jesus is the great intercessor.  Jesus wanted to carry our wounds with him in his own wounds, in order to be able to show them to the Father.  This is the prize of our salvation.  We should have more trust; we should trust more in our prayers, in the prayers of Jesus: Lord, pray for me - But I am God, I can give you ... - Yes, but pray for me, because you know how to make intercession.  This is Peter's secret: Peter, I am praying for you ' that your faith may not fail you (Lk 22: 32).

May the Lord help us to ask for the grace of knowing that he is praying for all of us. 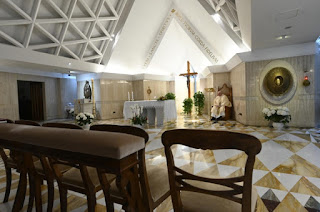