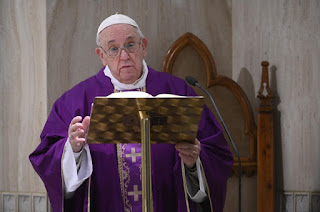 These days of suffering and of sadness make us aware of many hidden problems.  In the newspapers today, there is a photograph that grabs at the heart: many homeless people from one of the cities who are lying in a parking lot, under observation ... there are so many homeless people today.  Let us ask Saint Teresa of Calcutta to reawaken in us the sense of closeness to many people in society who, in the normal course of their lives, are living hidden lives but, like the homeless, come to light in moments of crisis. 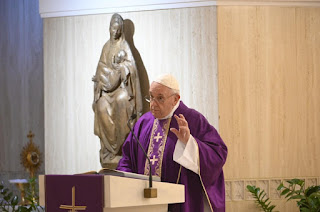 Homily of the Holy Father, Pope Francis
during the Mass celebrated on 2 April 2020

The Lord has always remembered his covenant. We repeated these words in the Responsorial Psalm (cf Ps 105:8). The Lord never forgets, never forgets. Yes, he forgets only in one case, when he forgives sins. After forgiving he loses his memory, he does not remember sins. In other cases, God does not forget. He remembers his loyalty. His loyalty to his people. His loyalty to Abraham is a reminder of the promises he had made. God chose Abraham to make a way. Abraham is an elect, he was an elect. God elected him. Then in that election he promised him an inheritance and today, in the passage from the book of Genesis, there is one more step. As for me, my covenant is with you (Gn 17:4). The covenant. A covenant that shows his fruitfulness: you will become the father of a multitude of nations (Gn 17:4).

Election, promise and covenant are the three dimensions of the life of faith, the three dimensions of the Christian life. Each of us is an elect, no one chooses to be a Christian among all the possibilities that the religious market offers, he is an elect. We are Christians because we have been elected, chosen. In this election there is a promise, there is a promise of hope, the signal is fruitfulness: Abraham will be the father of a multitude of nations and ... you will be fruitful in faith (cf Gen. 17,5-6). Your faith will flourish in works, in good works, in works of fruitfulness too, a fruitful faith. But you must - the third step - observe the covenant with me (cf Gn 17:9). And the covenant is loyalty, to be faithful. We have been elected, the Lord has given us a promise, now he is asking us for a covenant. An alliance of loyalty. Jesus says that Abraham exulted with joy while thinking about, seeing his day, the day of great fruitfulness, that his son - Jesus was a son of Abraham (cf Jn 8:56) - who came to redo creation, which is more hard than to do it in the first place, says the liturgy - he came to bring about the redemption of our sins, to free us.

The Christian is a Christian not because he can show the faith of baptism: the faith of baptism is a card. You are a Christian if you say yes to the election that God has made of you, if you go behind the promises that the Lord has made to you and if you live a covenant with the Lord: this is Christian life. The sins we commit along the journey are always against these three dimensions: we do not accept our election and we elect many idols, many things that are not of God. We do not accept hope in the promise, go, look at the promises from afar, even many times, as the Letter to the Hebrews says (cf Heb 6:12; Heb 8:6), greeting them from afar and make sure that the promises we make today concern the little idols that we make, and we forget the covenant, we try to live without covenant, as if we were without a covenant.

Fruitfulness is joy, that joy of Abraham who saw the day of Jesus and was full of joy (cf Jn 8:56). This is the revelation that the word of God gives us today about our Christian existence. May it be for us like that of our Father: conscious of being elected, joyful of going towards a promise and faithful in living the covenant. 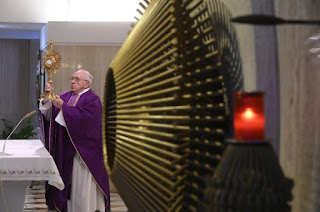