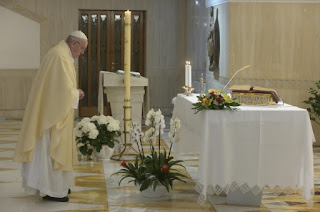 At this time, when we need great unity among us, between countries, let us pray today for Europe: that Europe may succeed in strengthening this unity, this fraternal unity that the founding fathers of the European union dreamed about. 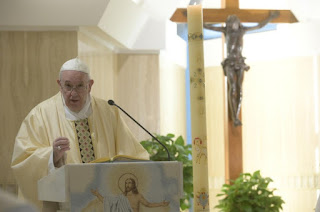 Homily of the Holy Father, Pope Francis
during the Mass celebrated on 22 April 2020

This passage from the gospel of John, chapter 3 (cf Jn 3: 16-21), the dialogue between Jesus and Nicodemus, is truly a theological treatise: it's all there.  The kerygma, the catechesis, theological reflection, parenthesis ... everything is there, in this chapter.  And each time that we read it, we find more richness, more explication, more things that help us understand God's revelation.  It would be good to read this passage numerous times, in order for us to draw closer to the mystery of redemption.  Today, we will focus on only two points from all of this, two points that are found in today's passage.

The first point is the revelation of God's love.  God loves us and he loves us - as the Saint says - to the point of madness: God's love seems like madness.  He loves us: God so loved the world that he gave his only Son (Jn 3: 16).  He gave his Son, he sent his Son and he sent him to die on the cross.  Each time we look at the crucifix, we see this love.  The crucifix is precisely the great book of God's love.  It is not an object to be placed here or to be put there, something that is very nice, not so nice, older, more modern ... no.  It is precisely the expression of God's love.  God loved us in this way: he sent his Son, he gave himself, to the point of death on the cross, out of love.  God so loved the world that he gave his Son (cf Jn 3: 16).

How many people, how many Christians spend their time looking at the crucifix ... and there they find everything, because the Holy Spirit helps them to understand that this is where all the science, all the love of God is found, all Christian wisdom. Paul talks about this, explaining that all the human reasoning he makes is useful to a certain extent, but that real reasoning, the most beautiful way of thinking, but a reasoning which also explains everything more, is the cross of Christ, is the crucified Christ who is a scandal (cf 1 Cor 1: 23) and madness, but the One who is the way. This is what love of God is. God who so loved the world that he gave his only begotten Son (Jn 3: 16). And why?  So that everyone who believes in him will not perish but have eternal life (Jn 3: 16). The love of the Father who wants his children with him.

Look at the cross in silence, look at the wounds, look at Jesus' heart, look at everything there: the crucified Christ, the Son of God, crushed, humiliated ... for the sake of love.  This is the first point that helps us today to see this theological treatise which is the dialogue between Jesus and Nicodemus.

The second point is one that also helps us: The light came into the world and men preferred shadows to the light, because their works were evil (Jn 3: 19).  Jesus also took up this element of light.  There are two people - we too, sometimes - who cannot live in the light because they are used to the shadows.  The light dazzles them, they are unable to see. They are human bats: they only know how to act at night. And we too, when we are in sin, we are in this state: we do not tolerate light. It is more convenient for us to live in darkness; light is a slap, it helps us to see what we don't want to see. But the worst part is that the eyes, the eyes of the soul, by the fact of living in darkness, get so used to the shadows that they end up ignoring what light truly is. Losing the sense of light, because I'm getting more used to darkness. And so many human scandals, so many cases of corruption tell us this same truth. The corrupt don't know what light is, they don't know it. We too, when we are in a state of sin, in a state of estrangement from the Lord, we become blind and we feel better in darkness and we are left in this way, without seeing, like the blind, doing the best that we can. 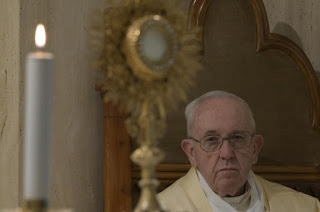