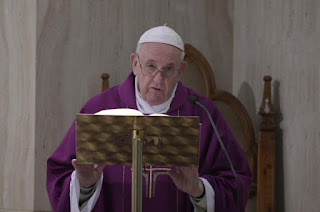 I am thinking about a serious problem that exists in some parts of the world.  Today, I wish to pray today for the problem of overcrowding in prisons.  Where there is overcrowding - many people are there - there is a danger, during this pandemic, which can end up in a serious disaster.  Let us pray for those who are responsible, for those who have to make decisions about these situations, that they may find fair and creative solutions to resolve this problem. 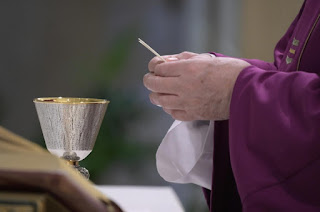 Homily of the Holy Father, Pope Francis
during the Mass celebrated on 6 April 2020

This passage ends with an observation: Then the chief priests decided to kill Lazarus too, because many Jews had left because of him and believed in Jesus (Jn 12: 10-11). The other day we saw the steps of temptation: the initial seduction, the illusion, then temptation grows - a second step - and a third, it grows and we are infected and justified. But there is another step: go ahead, do more, don't stop. For these leaders it was not enough to put Jesus to death, but now also Lazarus, because he was a witness of life.

But today I would like to dwell on one of Jesus' words. Six days before Easter - we are right on the threshold of the Passion - Mary makes this gesture of contemplation: Martha was serving - actively ministering - and Mary opened the door to contemplation. And Judas was thinking about money and thinks of the poor, but not because he cared for the poor, but because he was a thief and, since he kept the purse, he took what money they put into it (Jn 12.6). The story of the non-faithful administrator is always current, there always are unreliable people, even at a highest levels: we can think of some charitable or humanitarian organizations that have many employees, many, who have a very rich structure of people and in the end only forty percent of the proceeds come to the poor, because sixty percent is used to pay the salaries of so many people. It is a way of taking money from the poor. But the answer is Jesus. And here I want to stop: In fact, you always have the poor with you (Jn 12: 8). This is a truth: In fact, you always have the poor with you. The poor are there. There are many: there is the poor man we see, but this is the least part; the great majority of the poor are those who we do not see: the hidden poor. And we do not see them because we enter this culture of indifference which is based on negotiation and we deny: No, no, there are not many, they do not see each other; yes, that case ... , we are always diminishing the reality of the poor. But there are many, many.

Also, if we do not enter into this culture of indifference, there is a habit of seeing the poor as ornaments, parts of a city: yes, there are some, like statues; yes, there are, they are seen; yes, that old woman asking for alms, the other one ... But as if it were a normal thing. It is part of the city's ornamentation to have poor people. But the vast majority are the poor victims of economic policies, of financial policies. Some recent statistics make the summary like this: there is a lot of money in the hands of a few and a lot of poverty in many, in many. And this is the poverty of many people who are victims of the structural injustice of the world economy. And there are many poor people who are ashamed to show that they are not making ends meet; many poor who are part of the middle class, who secretly go to Caritas and secretly ask and feel ashamed. The poor are much more numerous than the rich; there are many of them, many ... And what Jesus says is true: In fact, you always have the poor with you. But do I see them? Do I notice this reality? Especially the hidden reality, those who are ashamed to say that they cannot make ends meet.

I remember that in Buenos Aires I was told that the building of an abandoned factory, which had been empty for years, was inhabited by about fifteen families who had arrived in the last few months. I went there. They were families with children and each had taken part of the abandoned factory to live in. And, looking around, I saw that each family had good furniture, furniture that most middle class people might have, they had television, but they went there because they could not pay the rent. The new poor who have to leave the house because they cannot pay the rent go there. It is that injustice of the economic or financial organization that brings them to do such things. And there are many, many of them, to the point that we will meet them in the judgment. The first question Jesus will ask us is: How are you doing with the poor? Did you feed them? When he was in prison, did you visit him? In the hospital, did you see him? Did you assist the widow, the orphan? Because I was there.  And on this we will be judged. We will not be judged for the luxuries we possess or the trips we make or the social importance we have. We will be judged for our relationship with the poor. But if I, today, ignore the poor, leave them aside, if I choose to believe they are not there, the Lord will ignore me on the day of judgment. When Jesus says: You always have the poor with you, it means: I, I will always be with you in the poor. I will be present there.  And this is not being a communist, this is the core of the Gospel: we will be judged on this. 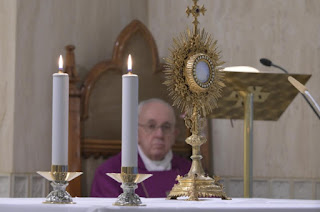 
My Jesus, I believe that you are truly present in the Blessed Sacrament of the altar. I love you above all things and I desire you in my soul. Since I cannot receive You sacramentally now, at least spiritually come to my heart. As you have already come, I embrace you and I join myself to you. Do not let me ever be separated from you.  Amen.