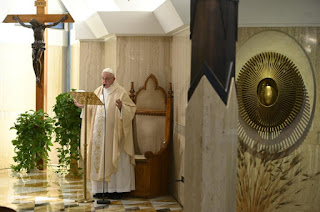 Let us pray today for rulers, for scientists, for politicians who have begun to study the way out, the post-pandemic realities, this afterwards which has already begun ... that they might find the right path, always in favour of people, always in favour of their people. 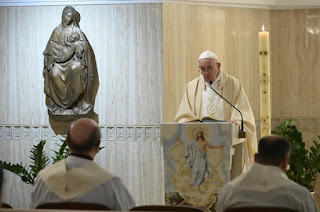 Homily of the Holy Father, Pope Francis
during the Mass celebrated on 13 April 2020

Today's gospel presents an option, an everyday option, a human option but one that has been held since that day: an option between the joy, the hope of Jesus resurrection ... and the nostalgia of the tomb.

Women went on ahead to make their proclamation (cf Mt 28: 8): God always begins with women, always. They open roads. They don't doubt: they know; they saw him, they touched him. They also saw the empty tomb. It is true that the disciples could not believe it and that they said: But these women are perhaps a little too imaginative ... I don't know, they had their doubts. But they were sure and they eventually carried on this path ... and it continues even today: Jesus is risen, he is alive among us (cf Mt 28: 9-10). And then there is the other: it is better not to live, with the empty tomb. There are so many problems that this empty tomb can bring us. And the decision to hide the facts. It is as it always is: when we do not serve God, the Lord, we serve the other god, money.

Let us recall what Jesus said: there are two masters, the Lord God and the lord called money. You cannot serve both. And to get out of this evidence, away from this reality, the priests, the doctors of the Law chose the other path, the one that their god offered them ... money, and they paid: they paid for silence (cf Mt 28: 12-13) . The silence of the witnesses. One of the guards had confessed, as soon as Jesus died: Truly, this man was the Son of God! (Mk 15: 39). These poor people did not understand, they were afraid because life was going by ... and they went to the priests, to the doctors of the Law. And they paid: they paid for silence, and this, dear brothers and sisters, is not a bribe: this is pure corruption, pure corruption. If you do not confess Jesus Christ the Lord, think about why not: where is the seal for your sepulchre, where there is corruption. It is true that many people do not confess Jesus because they do not know him, because we have not consistently proclaimed him and this is our fault. But when we take this path in the light of the evidence, it is the devil's path, it is the path of corruption. You pay and you shut up.

Even today, faced with the approaching - let us hope that it will be soon - approaching end of this pandemic, we have the same option: either our bet will be for life, for the resurrection of peoples or it will be for the god of money: to return to the tomb of hunger, slavery, wars, arms factories, children without education ... that is the sepulchre. 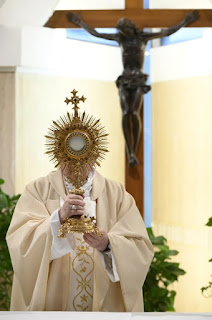