Via Crucis in Rome 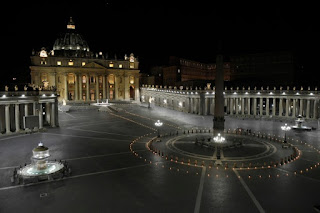 At 9:00pm local time this evening in Rome (3:00pm EDT), the Holy Father, Pope Francis presided over the pious exercise of the Via Crucis (Stations of the Cross) which took place in Saint Peter's Square and was televised for all to see.

The preparation of the texts of the meditations and the prayers for this year's Stations were entrusted by the Holy Father to the Chaplaincy of the Due Palazzi prison in Padua. The meditations were written by five prisoners, by a family who were victims of a murder crime, by the daughter of a man sentenced to life imprisonment, by a prison educator, by a supervising magistrate, by the mother of one of the prisoners, by a catechist, by a voluntary friar, by an officer of the Penitentiary Police and by a priest accused and then definitively acquitted of justice after eight years of trials.

The procession of the Cross was led by two groups of five people each: one group from the Due Palazzi prison in Padua and the other group from the Vatican Health and Hygiene Department.

The route began near the obelisk, moved around it for eight stations and then proceeded towards the fan for four stations. Under the fan was placed the Crucifix of San Marcello, facing the Holy Father. Here the twelfth station was observed. The thirteenth station took place in the middle of the fan, while the last one was above the platform. The whole itinerary was marked by torches on the ground.