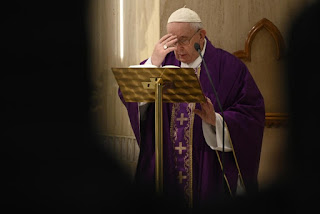 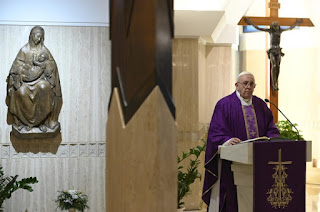 Homily of the Holy Father, Pope Francis
during the Mass celebrated on 3 April 2020

On this Friday of Passion Week, the Church recalls the suffering of Mary, the Addolorata.  This veneration by the people of God has taken place for centuries. Hymns have been written in honour of Our Lady of Sorrows: she stood at the foot of the cross and contemplated him there, suffering. Christian piety has collected the sufferings of the Madonna and speaks of the seven sorrows. The first, just 40 days after the birth of Jesus, was the prophecy of Simeon who speaks of a sword that will pierce her heart (cf Lk 2: 35). The second sorrow, we think of the flight to Egypt to save their Son's life (cf Mt 2: 13-23). The third sorrow was those three days of anguish when the boy Jesus remained in the temple (cf Lk 2: 41-50). The fourth sorrow, when Our Lady met with Jesus on the way to Calvary (cf Jn 19: 25). The fifth of Our Lady's sorrows was the death of Jesus, to see her Son there, crucified, naked, dead. The sixth pain, the descent of Jesus from the cross; he was dead and she took him in her arms as she had taken him in her arms more than 30 years earlier in Bethlehem. The seventh pain is the burial of Jesus. And so, Christian piety follows this path of the Madonna who accompanies Jesus. It is good for me, late in the evening, when I pray the Angelus, to pray these seven sorrows as a remembrance of the Mother of the Church, since the Mother of the Church gave birth to all of us with so much pain.

Our Lady never asked for anything for herself, never. Yes, she asked for others: we can think of Cana, when she went to speak with Jesus. She never said: I am the mother, look at me: I will be the queen mother. She never said this. She did not ask for anything important for herself, not even a place in the apostolic college. She only accepted to be a Mother. She accompanied Jesus as a disciple, because the Gospel shows that she followed Jesus: with her friends, pious women, she followed Jesus, she listened to Jesus. Once someone recognized her: Ah, here is the mother ... Your mother is here (cf Mk. 3: 31) ... She followed Jesus, all the way to Calvary. And there, standing there ... people surely said: Poor woman, how she must suffer", and the bad guys certainly said: But, she too is to blame, because if she had educated him well this would not have ended like this. She was there, with her Son, with her Son's humiliation.

We should honour Our Lady and say: This is my Mother, because she is our Mother. And this is the title she received from Jesus, right there, at the moment of the Cross (cf Jn 19: 26-27).  These are your children, you are their Mother.  Jesus did not make her Prime Minister or give her functionality titles. He only made her our Mother. And then, the Acts of the Apostles show her in prayer with the apostles as their Mother (cf Acts 1: 14). Our Lady did not want to take any title from Jesus; she received the gift of being His Mother and the duty to accompany us as a Mother, to be our Mother. She did not ask for herself to be a quasi-redeemer or a co-redeemer: no. The Redeemer is one and this title is not shared. She is only a disciple and a mother. And so, we must think of her as  a Mother, we must seek her, we must pray to her. She is our Mother ... in the Mother Church. In the motherhood of Our Lady we see the motherhood of the Church which receives everyone, good and bad: everyone. 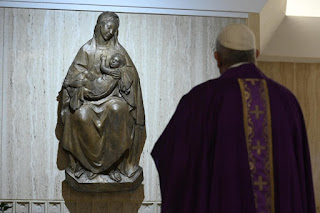