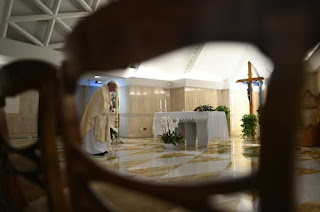 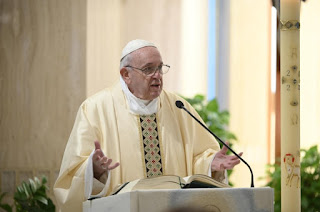 Homily of the Holy Father, Pope Francis
during the Mass celebrated on 29 April 2020

In the first reading from the apostle Saint John, there are many contrasts: between light and darkness, between lies and truth, between sin and innocence (cf 1 Jn 1: 5-7).  But the apostle always calls us to concreteness, to truth, and he tells us that we cannot be in communion with Jesus while at the same time walking in darkness, because He is light.  We have to choose one or the other: light or darkness; it would be worse to be non-comital - to stay in the grey - because that would make us believe that we are walking in the light since we are not in darkness ... that would reassure us.  But it is very dangerous to remain in the grey.  Either light or darkness: one or the other.

The apostle continues: If we say we are without sin, we are deceiving ourselves and the truth is not with us (1 Jn 1: 8), because we have all sinned, we are all sinners. And here there is one thing that can deceive us: saying we are all sinners, like someone who says good morning, good day: it becomes a normal thing, even a social thing, but eventually we do not have a true conscience of sin. No: I am a sinner for this reason, or this, or this. Concreteness. The concreteness of truth: truth is always concrete; lies are ethereal, they are like air, you cannot touch it. Truth is concrete. And you cannot confess your sins in an abstract way: Yes, I ..., yes, once I lost my patience, another time ..., just dwelling on abstract things. I am a sinner.  Concreteness:  I did this. I thought this. I said this. Concreteness is what makes me sure that I am a sinner in a serious way and not a sinner in the air.

In the gospel, Jesus says: I praise you, Father, Lord of heaven and earth, because you have hidden these things from the wise and the learned and you have revealed them to the little ones (Mt 11: 25). The concreteness of little ones. It's nice to listen to children when they come to confession: they don't say strange things, in the air; they say concrete things, and sometimes too concrete because they have that simplicity that God gives to little ones. I always remember a child who once came to tell me he was sad because he had quarrelled with his aunt. But then it went on. I said, What did you do? - I was at home, I wanted to go play football - a child - and she was my aunt - mom wasn't there - and she said: 'No, you can't go out: you have to do your homework first'. Words go, words come, and in the end I sent her to that country. He was a child of great geographical culture: he also told me the name of the country to which his aunt had been sent! They are like this: simple, concrete.

We too must be simple, concrete. Concreteness leads to humility, because humility is concrete. We are all sinners is an abstract thing. No: I am a sinner for this reason, and this and this. And this leads me to the shame of looking to Jesus: Forgive me. The true attitude of the sinner. If we say we are sinless, we deceive ourselves and the truth is not in us (1 Jn 1: 8). And one way of saying that we are sinless is this abstract attitude: Yes, we are sinners, yes, I lost my patience once ..., but that's all in the air. I don't notice the reality of my sins. But, you know, everyone, we all do these things, I'm sorry, I'm sorry ..., it gives me pain, I don't want to do it anymore, I don't want to say it anymore, I don't want to think it anymore ... It is important that within us we give names to our sins. Concreteness. Because if we keep ourselves in the air, we will end up in darkness. We must become like the little ones, who say what they feel, what they think: they have not yet learned the art of saying things a little shrouded so that they understand each other but do not say anything to each other. This is an art that belongs to the great, which often does us no good.

Yesterday I received a letter from a boy from Caravaggio. His name is Andrea. And he told me some things. The letters of boys, of children ... are beautiful, for their concreteness. And he told me that he had heard Mass on television and that he had to scold me about one thing: that I say peace be with you, ... and you cannot say this because with the pandemic we cannot touch each other. He does not see that you - here in church - bow your heads and do not touch. But he has the freedom to say things as they are.

We too, with the Lord, we must have the freedom to say things as they are: Lord, I am a sinner, help me. Like Peter after the first miraculous catch of fish: Lord, get away from me, because I am a sinner (Lk 5: 8). Having this wisdom of concreteness. Because the devil wants us to live in warmth, lukewarm, in grey: neither good nor bad, neither white nor black, grey. This is a life that the Lord does not like. The Lord does not like lukewarm people. Concreteness. Not to be liars. If we confess our sins, he is faithful and just enough to forgive us (1 Jn 1: 9). He forgives us when we are concrete. Spiritual life is so simple, so simple; but we make it complicated with these nuances, and in the end we never get there ...

Let us ask the Lord for the grace of simplicity. May He give us this grace that He gives to simple people, to children, to young people who say what they feel, who do not hide what they feel. Even though it might be something wrong, they say it. Even with Him, we should say things: transparency. And don't live a life that is not one thing or the other. Let us pray for the grace of freedom to say these things; and also the grace of knowing who we are before God. 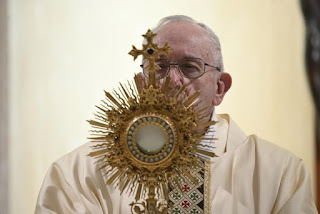