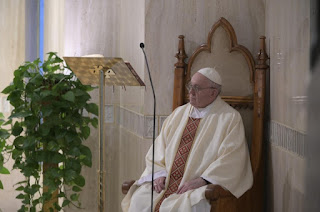 Let us pray today for the dead, those who have died because of the pandemic; and also in a special way for the unknown dead - let us say it this way - : we have seen photographs of mass graves.  Many of them ... 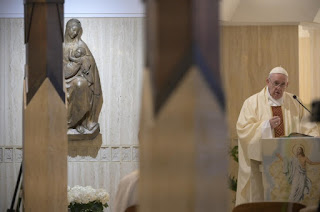 Homily of the Holy Father, Pope Francis
during the Mass celebrated on 30 April 2020

No one can come to me unless the Father who sent me draws him (Jn 6: 44).  Jesus recalls the fact that even the prophets had foretold this: And all will be instructed by God (Jn 6:45). It is God who attracts knowledge of the Son. Without this, one cannot know Jesus. Yes, one can study, even study the Bible, even know how he was born, what he did, this we can know, yes. But knowing it from within, knowing the mystery of Christ is only for those who are attracted by the Father to this mystery.

This is what happened to the Queen of Ethiopia's minister of economics. You can see that he was a pious man and that he took the time, in the midst of so many of his affairs, to go to worship God. He was a believer. And while he returned home, he was reading the prophet Isaiah (cf Acts 8: 27-28). The Lord took Philip, sent him to that place and then said to him: Go ahead, go to that wagon (Jn 8: 29). And he heard the minister reading from the Book of Isaiah. He approached and asked him a question: Do you understand? - And how could I understand, if no one guides me? (Acts 8: 31), and he asks the question: About whom is the prophet speaking? ... Please, get in the carriage. And during the journey - I don't know how long it took, I think at least a couple of hours - Philip explained, told the official about Jesus (cf Acts 8: 26-35).

The restlessness that this gentleman had in reading the prophet Isaiah was from the Father, who attracted him to Jesus (cf Jn 6:44): he had prepared him, brought him from Ethiopia to Jerusalem to worship God and then, with this reading, he had prepared his heart to receive Jesus. To the point that as soon as he saw the water he said, Can I be baptized? (cf Acts 8: 36). And he believed.

And this truth - that no one can know Jesus without the Father drawing him (cf Jn 6: 44) - this is valid for our apostolate, for our apostolic mission as Christians. I also think of missions. What are you going to do in the missions? - I want to convert people - But stop, you will not convert anyone! The Father will attract those hearts to recognize Jesus. Going on a mission is a matter of bearing witness to one's faith; without testimony you will do nothing. To go on a mission - and missionaries are good! - does not mean building large structures, things…, and stopping like this. No, structures must be testimonials. You can build a hospital, educational structures of great perfection, of great development, but if a structure is without Christian testimony, your work there will not be a work of witness, a work of the true preaching of Jesus: it will be a charitable society, very good - very good! - but nothing more.

If I want to go on a mission ..., if I want to go to out with an apostolate, I have to go with the willingness to know the Father will draw people to Jesus, and this action on my part testifies to him. Jesus himself says this to Peter, when he confesses that He is the Messiah: You are blessed, Simon Peter, because this has been revealed to you by the Father (cf Mt 16: 17). It is the Father who attracts, and He also attracts with our testimony. I will do many works, here, here, there, of education, of this, of the other ..., but without testimony they are good things, but they are not the proclamation of the Gospel, they are not places that give the possibility for the Father to draw others to the knowledge of Jesus (cf Jn 6: 44). Work and testimony.

This is the great rule for our apostolate, everywhere, and especially for missions. Going on a mission is not proselytizing. Once, a lady - she was good, you could see she was of good will - came up with two boys, a boy and a girl, and said to me: This boy, Father, was a Protestant and converted: I convinced him. And this girl was ... - I don't know, animist, I don't know what she said to me - and I converted her. And the lady was good ... good. But she was wrong. I lost my patience a little and said: Listen, you haven't converted anyone: it was God who touched people's hearts. And don't forget: testimony, yes; proselytism, no.

Let us ask the Lord for the grace to do our work by bearing witness and with prayer, so that He, the Father, may attract people to Jesus. 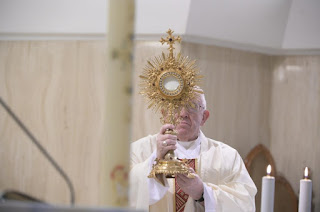