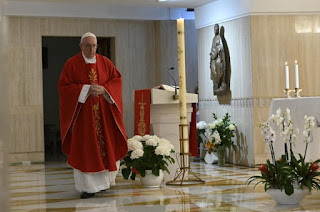 Let us pray together today for the people who are involved in funeral services.  What they are doing is very painful, very sad, and they feel the pain of this pandemic very close to them.  Let us pray for them. 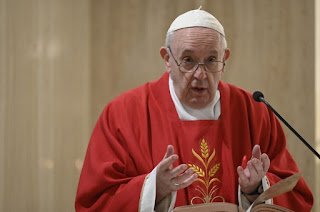 Homily of the Holy Father, Pope Francis
during the Mass celebrated on 25 April 2020

Today, the Church is celebrating Saint Mark, one of the four evangelists (gospel writers), who was very close to the apostle Peter.  The Gospel of Mark was the first to be written.  It is simple, in a simple style, very close.  If you have a bit of time today, take this gospel in hand and read it.  It is not long, and it is a pleasure to read the simplicity with which Mark recounts the Lord's life.

In the gospel passage that we have just read - which is at the end of the Gospel of Mark - the Lord is sending the disciples.  The Lord was made known as our saviour, as the only Son of God; he revealed himself to all of Israel, to the people, especially in more detail to the apostles, to the disciples.  This the Lord's farewell, the Lord was going away: he left and ascended into heaven, where he is seated at the right hand of God (Mk 16: 19).  But before he left, when he appeared to the Eleven, he said to them: Go into all the world and proclaim the Gospel to every creature (Mk 16: 15).  There is a missionary feel to the faith.  Faith: either it is missionary in character or it is not faith.  Faith is not something only for me, because I grow up with faith: this is a gnostic heresy.  Fatih always leads us to go outside of ourselves.  Go out.  Passing on the faith; faith must be passed on, must be offered, above all through witness: Go, so that the people may see how you live (Mk 16: 15).

Someone said to me, one of the European priests, from a city in Europe: There is so much unbelief, so much agnosticism in our city, because Christians have no faith.  If they had it, surely they would give it to others.  There is a lack of missionary zeal.  Because deep down, there is a lack of conviction: Yes, I am a Christian, I am a Catholic ... As though it were a matter of a social attitude.  In the identity card, your name is this or that ... and I am a Christian.  It's a matter of showing your identity card.  it is not a matter of faith!  It is something cultural.  Faith necessarily sends you out, faith compels us to give: for at its core, faith must be passed on.  It is not something calm.  Ah, Father, you mean that we should all be missionaries and go to far-off lands?  No, that is part of the missionary nature. That means that if you have faith, you should necessarily go out of yourself and give proof of your faith in social environments.  Faith is social, it is for everyone: Go out to the whole world and proclaim the Gospel to every creature (Mk 16: 15).  And this does not mean that we should proselytize, as though I were a member of a football team aimed at converting people, or that I was part of a non-profit organization.  No, faith is not proselytism.  Its aim is to proclaim revelation, so that the Holy spirit can act in the hearts of people through the witness that is given: as a witness, with service.  Service is a way of life.  If I say that I am a Christian and yet I live like a pagan, that won't work!  That won't convince anyone.  If I say that I am a Christian and I live like a Christian, that will attract others.  It's a matter of witness.

Once, in Poland, a university student asked me: In university, I have many atheist friends.  What should I say to them to convince them? - Nothing, dear, nothing!  The last thing that you should do is to say something.  Begin by living, and they, when they see your witness, they will ask you: 'Why do you live this way?'  This is also a matter of the humility that Saint Peter speaks about in the first reading: Beloved, clothe yourselves in humility toward each other, for God resists those who are proud but He gives grace to the humble (1 Peter 5: 5).  How many times in the Church, throughout history, are movements born, associations of men or women who want to convince others about faith, to convert others ... These are true proselytizers.  And what happens in the end?  They often end up in corruption.

This gospel passage is so tender!  But where is the security?  How can I be sure that if I go outside of myself I will be successful in passing on the faith?  Proclaim the gospel to every creature (Mk 16: 15), you will do wonders (Mk 16: 17-18).  And the Lord will be with us to the end of time.  He is accompanying us.  In the passing on of the faith, the lord is always present with us.  In the passing on of ideologies, there will always be teachers but when I have an attitude of faith that must be passed on, the Lord is always there to accompany me.  I am never alone in passing on the faith.  It is the Lord with me who passes on the faith.  He promised: I will be with you all days, until the end of the world (cf Mt 28: 20).

Let us ask the Lord to help us to live our faith in this way: the faith of open doors, transparent faith, not proselytizing but faith that can be seen: This is who I am.  And with this healthy curiosity, we can help people to receive this message that will save them. 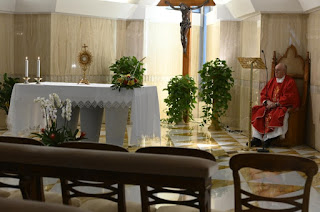