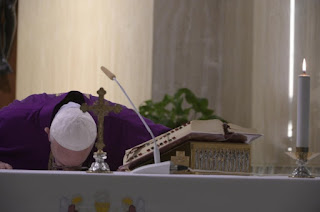 In these times of turbulence, difficulty and suffering, many people are thinking about different possible things that they can do, many good things.  But there is also no shortage of people who come up with not-so-good things that they can do to take advantage of this moment, to profit themselves.  Let us pray today that the Lord may give us a righteous conscience, a transparent conscience which can be seen by God without any shame. 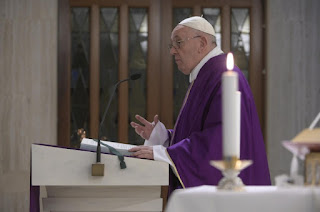 Homily of the Holy Father, Pope Francis
during the Mass celebrated on 4 April 2020

It has been a long time since the doctors of the law, even the high priests, were worried because strange things were going on in the country. Before this John, who eventually left him alone because he was a prophet, baptized there and people went to see him, but there were no other consequences. Then this Jesus came along, the one who had been pointed out by John. He began to make signs, perform miracles, but above all to speak to people and people understood him, and people followed him, and he did not always observe the law and this worried them so much. This man is a revolutionary, a peaceful revolutionary ... He attracts people to him, people follow him ... (cf Jn 11: 47-48). And these ideas led them to talk to each other: But look, I don't like this ... that other man ... and so among them there was this theme of conversation, of concern as well.

Then some went to him to test him and the Lord always had a clear answer that to them, to the doctors of the law, had not come to mind. We can think of that woman who was married seven times, widowed seven times: But in heaven, which of these husbands will she be married to? (cf Lk 20: 33). He replied clearly and they left a little ashamed for the wisdom of Jesus ... at other times they went away humiliated, as when they wanted to stone that adulterous woman and Jesus said in the end: Whoever of you is without sin throw the first stone (cf Jn 8: 7) and he Gospel says that they left, beginning with the older ones, humiliated at that moment. This increased this conversation between them went on: "We have to do something, this is wrong ...". Then they sent the soldiers to take him and they came back saying: We could not take him because this man speaks like no one else we have ever heard ... You too have been fooled (cf Jn 7: 45-49): they were all the more angry because not even soldiers could arrest him.

And then, after the resurrection of Lazarus - this we heard today - many Jews went there to see the sisters and to see Lazarus, but some went to see how things were going to bring back news, and some of them went to the Pharisees and reported to them what Jesus had done (cf Jn 11: 45). Others believed in Him. And these who left, the perpetual gossips, the ones who live carrying on the chatter ... went to tell them. At that moment, that group of lawyers that had gathered had a formal meeting: This is very dangerous, we have to make a decision. What are we going to do? This man performs many signs - they recognize miracles - If we let him continue like this, everyone will believe in him, there is danger, the people will follow him, they will detach themselves from us - the people were not attached to them - The Romans will come and they will destroy our temple and our nation (cf Jn 11: 48).  There was some truth to this but not all, it was a justification, because they had found a balance with the citizens but they hated the Roman occupation, but politically they had found a balance. So they talked to each other.

One of them, Caiaphas - he was the most radical - was a high priest.  He said: Do you not realize that it is better for us that one man die for the people, and the whole nation will not be ruined! (Jn 11: 50). He was the high priest and he made the proposal: Let's take him out. And John says: But this he did not say for himself, but, being high priest that year, he prophesied that Jesus had to die for the nation ... From that day onward they decided to kill him (cf Jn 11: 51-53). It was a trial, a trial that began with small anxieties in the time of John the Baptist and then ended in this session of lawyers and priests. It was a growing process, a process that was safer than the decision they had to make, but no one had said it so clearly: This must be done.

This way of proceeding for the doctors of the law is just a figure of how temptation works in us, because behind this evidently it was the devil who wanted to destroy Jesus and in general, all temptation within us acts like this: it starts with a little thing, with a desire, an idea grows, infects others and ultimately justifies itself. These are the three steps of the devil's temptation in us and here are the three steps that the devil's temptation made in the person of the lawyer. It began with little temptations, but it grew, it grew, then it infected the others, it became a body and in the end it was justified: It is necessary for one man to die for the people (cf Jn 11: 50), total justification. And everyone went home quietly. They said, This is the decision we had to make.

All of us, when we are overcome by temptation, we end up calm, because we have found a justification for this sin, for this sinful attitude, for this life not according to the law of God. We should have the habit of seeing this process of temptation in us. That process that makes us change our hearts from good to bad, which takes us on the downward slope. Something that grows, grows, grows slowly, then infects others and ultimately justifies itself. We hardly recognize the temptations, the devil is cunning. And he knows how to take this path, the same path that he took to arrive at the condemnation of Jesus.

When we find ourselves in sin, in the midst of a fall, yes, we must go to ask the Lord for forgiveness, it is the first step we must take, but then we have to say, "How did I come to fall there? How did this process start in my soul?  How did it grow? Who have I infected? And in the end, how did I justify myself to fall? The life of Jesus is always an example for us and the things that have happened to Jesus are things that will happen to us, the temptations, the justifications, the good people who are around us and perhaps we do not recognize them ... nor are we aware of the bad ones, at the moment of temptation, let's try to get closer to them to make the temptation grow. But let's never forget: always, behind a sin, behind a fall, there is a temptation that started small, that has grown, that has infected us and in the end I find a justification for falling. May the Holy Spirit enlighten us with this inner knowledge. 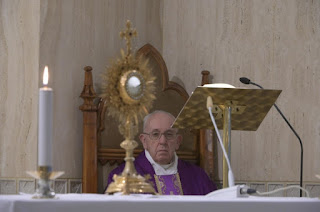 My Jesus, I believe that you are truly present in the Blessed Sacrament of the altar. I love you above all things and I desire you in my soul. Since I cannot receive You sacramentally now, at least spiritually come to my heart. As you have already come, I embrace you and I join myself to you. Do not let me ever be separated from you.  Amen.
at 08:44