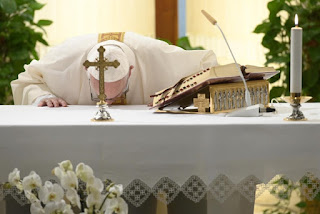 Today, I would like us to pray for women who are expecting children, pregnant women who will become mothers and who are worried, who are preoccupied.  They are asking themselves: In what kind of world will my child live?  Let us pray for them, that the Lord may give them courage to keep going with their children, with the confidence that it will certainly be a different world, but that it will always be a world that the Lord will love very much. 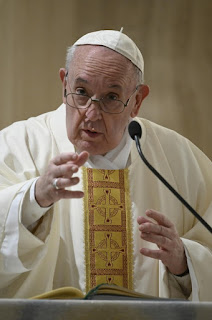 Homily of the Holy Father, Pope Francis
during the Mass celebrated on 17 April 2020

The disciples were fishermen: Jesus had called them while they were working.  Andrew and Peter were working with their fishing nets.  They abandoned their nets and followed Jesus (cf Mt 4: 18-20).  John and James were doing the same thing: they left their father and the others who were working with them and followed Jesus (cf Mt 4: 21-22).  The call came to them precisely as they were performing their work of being fishermen.  And this gospel passage today, this miracle of the miraculous catch of fish, makes us think of another miraculous catch, that is recounted by Luke (cf Lk 5: 1-11): there too, the same thing happened.  They were successful at catching fish even though they thought that they had failed.  After the preaching, Jesus had said: Go out into deeper water - But we have worked all night and have caught nothing! - Go!  I believe you - Peter had said - and so I will let down the nets.  There was such a great catch - the gospel says - that they were astonished (cf Lk 5: 9) at the miracle.  Today, in this other catch, there is no talk of astonishment.  We see something natural, we see that there was progress being made, a path that was leading toward knowledge of the Lord; I should use the right word: toward familiarity with the Lord.  When John saw it, he said to Peter: It is the Lord!, and Peter put on his clothes and jumped into the water and went to the Lord (cf Jn 21: 7).  The first time, he had knelt before Him: Go away from me, Lord, for I am a sinful man (cf Lk 5: 8).  This time, he says nothing, he is more natural.  No one asked: Who are you?  They all knew that it was the Lord, this meeting with the Lord was natural.  The apostles' degree of familiarity with the Lord had grown.

We too, Christians, in our path of life, are in this state of journeying, of progression in the degree of our familiarity with te Lord.  The Lord, can I say, is sympathetic, he is sympathetic because he walks with us, we know that it is He.  Here, no one asks him: who are you? ... they know that it is the Lord.  Daily familiarity with the Lord is a part of the life of Christians.  They most certainly ate together, the fish and some bread, they most certainly spoke together about many things, with great ease.

I say this, because someone caused me to reflect on the danger that we are experiencing at this moment, this pandemic which has had the effect that we are all communicating and sharing communion, even in a religious sense, through the media, through various means of communication; even during this Mass, we are all communicating, but even though we are not physically together, we are spiritually together.  There are few people gathered.  There is a great number of people: we are all together but we are not together.  The Sacrament too: today you have the Eucharist, but others who are following via the media can only make a spiritual communion.  And this is not the Church: it is the Church in the midst of a difficult situation, which the Lord permits, but the ideal of the Church is always that the people should be together with the sacraments.  Always.

Before Easter, when the news appeared that i would celebrate Easter inside the empty Saint Peter's Basilica, one of the bishops wrote to me - he is a good bishop - and he criticized me.  But why? ... Saint Peter's Basilica is so large, why not allow at least 30 people to join you, so that we can see people?  That would not be dangerous ... I thought: But what is he thinking, that he should say such a thing?  At the time, I did not understand.  But since he is a good bishop, very close to the people, I understood that he wanted to tell me something.  When I see him, I will ask him.  Then I understood.  He was saying to me: Be careful and don't spread the virus to the whole Church, don't contaminate the sacraments, don't contaminate the people of God.  The Church, the sacraments, the people of od are concrete.  It is true that in this moment we have to have this familiarity with the Lord in this way, but in order to exit the tunnel, not so that we can stay this way.  It's a matter of apostolic familiarity, which is not gnostic, which is not infected, which is not egotistical .. focused on individual apostles, but concrete familiarity, among God's people.  Familiarity with the Lord in our daily lives, familiarity with the Lord in the sacraments, among the people of God.  These practices allowed the apostles to walk the path of maturity in familiarity with the Lord, and we too can learn to do the same.  From the very first moment, the apostles understood that this familiarity was different from anything that they had ever imagined, and they came to experience it.  They knew that it was the Lord, they shared everything: community, the sacraments, the Lord, peace, even celebrations.

May the Lord teach us this intimacy with Him, this familiarity with Him, but in the Church, with the sacraments, with the holy and faithful people of God. 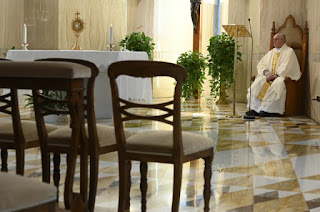