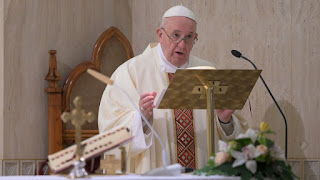 Let us pray today for the men and women who have political vocations: politics is a high form of charity.  For political parties in various countries, that in this moment of pandemic, they may seek together the good of their countries and not anyone's individual advancement. 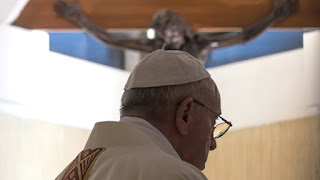 Homily of the Holy Father, Pope Francis
during the Mass celebrated on 20 April 2020

This man, Nicodemus, is one of the Jewish leaders, a man of authority.  He felt the need to go to Jesus. He went at night, because it was a delicate situation, because those who went to talk to Jesus were not looked at in a good light (cf Jn 3: 2). He was a righteous Pharisee, because not all Pharisees were bad: no, no; there were also righteous Pharisees. This was a righteous Pharisee. He felt restlessness, because he was a man who had read the prophets and knew that what Jesus did had been proclaimed by the prophets. He felt restlessness and he went to talk to Jesus. "Rabbi, we know that you came from God as a Teacher (Jn 3: 2): this is a confession, up to a certain point. No one in fact can perform these signs that you do, if God is not with him (Jn 3: 2). And he stops. He stops in front of the word therefore: If I say this ... then! ... And Jesus replied. He answered mysteriously, as he, Nicodemus, did not expect. He replied with that image of birth: if one is not born from above, he cannot see the Kingdom of God (Jn 3: 3). And he, Nicodemus, felt confusion, he did not understand and he took Jesus' answer literally: but how can one be born if one is already an adult, a great person? (cf Jn 3: 4) Being born from above, being born from the Spirit. It is the leap that Nicodemus' confession must make and he does not know how to do it. Because the Spirit is unpredictable. The definition of the Spirit that Jesus gives here is interesting: The wind blows where it wants and you hear its voice, but you don't know where it comes from or where it is going: so is anyone born of the Spirit (Jn 3: 8), that is to say, it is free. A person who allows himself to be carried on both sides by the Holy Spirit: this is the freedom of the Spirit. And whoever does this is a docile person: here we are talking about docility to the Spirit.

Being a Christian is not just about obeying the Commandments: they must be obeyed, this is true; but if you stop there, you are not a good Christian. Being a Christian is a matter of letting the Spirit enter inside you and taking you, taking you where he wants. Many times in our Christian life we stop like Nicodemus, before the therefore, we do not know the next step to take, we do not know how to do it or we do not have faith in God to take this step and let the Spirit enter in. To be born again is to let the Spirit enter us and to allow the Spirit to guide us and not for my own sake, in this particular moment: free, with the freedom of the Spirit, so that you will never know where you will end up.

The apostles, who were in the Upper Room when the Spirit came, preached with that courage, that frankness (cf Acts 2: 1-13) ... they did not know that this would happen; and they did it, because the Spirit guided them. The Christian must never stop only at the fulfillment of the Commandments: it must be done, but go further, towards this new birth which is the birth in the Spirit, which gives you the freedom of the Spirit.

This is what happened in the first reading, to the Christian community, after John and Peter returned from that interrogation they had with the priests. They went to their brothers in this community and reported what the chief priests and the elders had told them. And the community, when they heard this, all together, they got a little scared (cf Acts 4: 23) And what did they do?  They prayed. They didn't stop at prudent measures, no, now let's do this, let's keep going a little more calmly ...: no.  Pray. That it was the Spirit who told them, what they needed to do. They raised their voices to God saying Lord (Acts 4: 24) and they prayed. This beautiful prayer in a dark moment, at a moment where they had to make decisions and they did not know what to do. They wanted to be born of the Spirit, they opened their hearts to the Spirit: they allowed him to say it ... And they asked: Lord, Herod, Pontius Pilate with the nations and peoples of Israel have allied themselves against your Holy Spirit and Jesus (cf Acts 4: 27), they told the story and then they said: Lord, do something!  And now, Lord, look at their threats - those of the group of priests - and allow your servants to proclaim your word with all frankness (Acts 4: 29) ask for frankness, courage, not to be afraid: Reaching out your hand so that healings, signs and wonders can be performed in the name of Jesus. (v.30)  And when they had finished the prayer, the place where they were gathered trembled, and all were filled with the Holy Spirit and preached the Word of God with frankness (Acts 4: 31).  A second Pentecost happened there.

In the face of difficulties, in front of a closed door, which they did not know how to go through, they went to the Lord, they opened their hearts and the Spirit came and gave them what they needed and they went out to preach, courageously; they carried on. This is being born of the Spirit, this is what it is like not to stop at the therefore, the therefore of the things I have always done, the therefore after the Commandments, the therefore after religious habits: no! This is what it means to be born again. And how do you prepare someone to be born again? With prayer. Prayer is the thing that opens the door to the Spirit and gives us this freedom, this frankness, this courage of the Holy Spirit. You never know where it will take you. But it is the Spirit.

May the Lord help us to always be open to the Spirit; in turn, he will use our talents, our lives in service to the Lord. 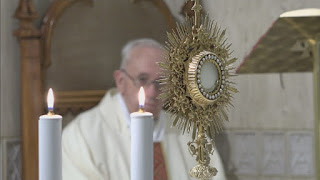