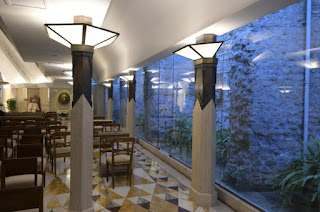 Today, let us pray for teachers who have to work very hard to provide their lessons over the internet and using other procedures, and let us also pray for students who have to write exams in a way that they are not used to doing.  Let us accompany them with our prayers. 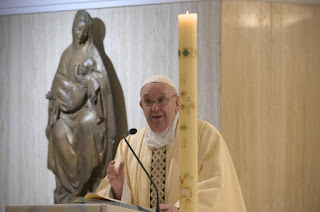 Homily of the Holy Father, Pope Francis
during the Mass celebrated on 24 April 2020

There is a phrase in this passage of the Gospel that makes us reflect: He said this in order to test them, for he himself knew what he was going to do (Jn 6: 6).  This is what Jesus had in mind, when he said to Philip: Where can we buy enough bread to feed them? (Jn 6: 5).  But he said this in order to test them.  He knew.  Here, we see the attitude Jesus had with the apostles.  He constantly put them to the test in order to teach them and, when they were not on duty, he would stop them and teach them.

The Gospel is filled with accounts of Jesus' efforts to help the disciples to grow up and to become pastors for the people of God, in this case, bishops: pastors for the people of God.  And one of the things that Jesus liked best was to spend time with the crowds, for this too was a symbol of the universality of redemption.  And one of the things that the apostles liked the least was the crowds, because they liked to be close to the Lord, to listen to the Lord, to listen to everything the Lord had to say.  That day, they had spent the day off there - that's what some of the other versions of the Gospels say ... all four Gospels speak of this ... perhaps there were two multiplications of the loaves - they returned from one of the Lord's missions and said: Let us go and rest a while (cf Mk 6: 31) and they went there.  The people realized where they were going on the sea ... they followed along the banks and they were waiting for them when they arrived ... And the disciples were not happy because the crowds had ruined their little outing: they could not relax and celebrate with the Lord.  In spite of all this, Jesus began to teach, they were listening and then they talked among themselves ... and hours, and hours, and hours went by ... Jesus spoke and the crowds were happy.  And the disciples were saying: our party is ruined, our rest period is ruined.

But the Lord was seeking to be close to these people, he wanted to instruct their pastors' hearts, to help them draw close to the people of God in order to serve them.  And they ... we can understand them ... they felt special, that they had been chosen, they felt as though they were the privileged few, a privileged class, an aristocracy, can we say, close to the Lord and very often, the Lord made gestures to correct them.  Let us think about the children, for example.  The apostles wanted to protect the Lord: No, no, no, don't bring the children too close; they are annoying, they will disturb him ... No, children should stay with their parents.  And Jesus?  Let the children come to me (cf Mk 10: 13-16).  And they didn't understand.  Then, they understood.  Then, I think it was on the way to Jericho, that other man who cried out: Jesus, son of David, have pity on me (Lk 18: 38).  And the Apostles: Shhh, be quiet, shhh ... the Lord is going by, don't disturb him.  And Jesus said: Who is this man?  Bring him here (cf Lk 18: 35-43).  That's what the Lord does, again.  In this way, he taught them to be close to the people of God.

It is true that the people of God tire out their pastors, they cause them to worry: when there is a good pastor, things multiply, because people will always find their pastor to be good, in one way or another.  Once, a wonderful pastor in a simple neighbourhood, a humble man, in my diocese, had a rectory like a normal house, just like the others, and people would knock at the door or at the window, at all hours of the day or night ... and once, he told me: I wanted to wall up the door and the windows so that they would leave me alone to rest.  But he knew that he was their pastor and that he should be with the people!  And Jesus formed, taught the disciples, the apostles to have this pastoral attitude of being close to the people of God.  And the people of God are tiring, because they always want concrete things; they always ask concrete questions ... maybe I am wrong but they ask for concrete things.  And the pastor should take care of these things.

The versions of this episode that are recounted by other gospel writers help us to see the hours that passed by and the fact that the people should have left because it was getting dark ... and they were saying: Send the people away so that they can go and buy something to eat, precisely at the moment when darkness was setting in, when night was falling ... (cf Lk 9: 12-13).  But what was going on? ... The disciples wanted to relax and to celebrate a bit, a little egotism that is not a bad thing, we understand, some time to spend with their pastor, to spend with Jesus who is the great pastor, and Jesus responded, in order to put them to the test: You yourselves, give them something to eat (Lk 9: 13).  And this is what Jesus says today to all pastors: You yourselves, give them something to eat.  Are they worried?  Comfort them.  Are they lost?  Show them the way.  Have they made mistakes?  Help them to solve their problems ... Give, give them ... And the poor apostle feels that he must give, give, give ... but from whom does he receive?  Jesus teaches us: from the same One who Jesus received from.  After this, he gave the apostles some time off and he went off to pray, he went to the Father, he went off to pray.  This double proximity of the pastor is the same that Jesus sought to help the apostles understand, so that they could become good pastors.

And sometimes the crowd is wrong ... in that case, they were wrong, right?  Seeing the miracle that he had accomplished, the people said: 'He is truly the prophet that is coming into the world'  Jesus realized that they were going to take him away to make him king; so he disappeared from among them (Jn 6: 14-15).  Perhaps, but ... the Gospel doesn't explain, maybe one of the disciples said to him: Lord, let us take advantage of this and take power.  Another temptation.  And Jesus helped him to see that that was not the right path.  The pastor's power is found in service, he has no other power and when he makes that error of taking on other power, he ruins his vocation and becomes ... how shall I say it ... a manager of pastoral enterprises, but not a pastor.  No structure can create a pastor: the heart of a pastor is what is at the heart of pastoral activity.  And the heart of a pastor is what Jesus is teaching us now. 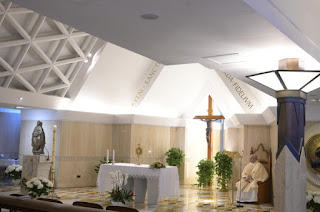