This afternoon, the Holy Father, Pope Francis left the Apostolic Nunciature in Sofia and travelled to the Knyaz Alexandar I Square for the celebration of Holy Mass. 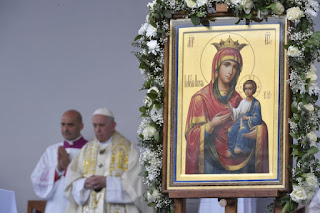 Upon his arrival, after having made a few tours among the faithful aboard the popemobile, at 4:30pm local time (9:30am EDT), the Pope presided over the Eucharistic Celebration for the III Sunday of Easter in the presence of approximately 12,000 faithful.

At the conclusion of the Mass, His Excellency, Christo Proykov, titular Bishop of Briula, Apostolic Exarch of Sofia for Catholics of Byzantine-Slavic rite and President of the Episcopal Conference of Bulgaria, offered a brief greeting to the Holy Father.  After the final blessing, the Pope returned by car to the Apostolic Nunciature. 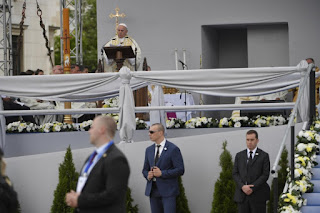 Homily of the Holy Father, Pope Francis
for the Mass celebrated in Sofia

It is wonderful to see how with these words Christians in your country greet one another in the joy of the Risen Lord during the Easter season.

The entire episode we have just heard, drawn from the final pages of the Gospels, helps us immerse ourselves in this joy that the Lord asks us to spread. It does so by reminding us of three amazing things that are part of our lives as disciples: God calls, God surprises, God loves.

God calls. Everything takes place on the shore of the Sea of Galilee, where Jesus first called Peter. He had called him to leave behind his trade as a fisherman in order to become a fisher of men (cf Lk 5:4-11). Now, after all that had happened to him, after the experience of seeing the Master die and hearing news of his resurrection, Peter goes back to his former life. He tells the others disciples, I am going fishing. And they follow suit: We will go with you (Jn 21:3). They seem to take a step backwards; Peter takes up the nets he had left behind for Jesus. The weight of suffering, disappointment, and betrayal had become like a stone blocking the hearts of the disciples. They were still burdened with pain and guilt, and the good news of the resurrection had not taken root in their hearts.

The Lord knows what a strong temptation it is for us to return to the way things were before. In the Bible, Peter’s nets, like the fleshpots of Egypt, are a symbol of a tempting nostalgia for the past, of wanting to take back what we had decided to leave behind. In the face of failure, hurt, or even the fact that at times things do not go the way we want, there always comes a subtle and dangerous temptation to become disheartened and to give up. This is the tomb psychology that tinges everything with dejection and leads us to indulge in a soothing sense of self-pity that, like a moth, eats away at all our hope. Then the worst thing that can happen to any community begins to appear – the grim pragmatism of a life in which everything appears to proceed normally, while in reality faith is wearing down and degenerating into small-mindedness (cf Evangelii Gaudium, 83).

But it is at the very moment of Peter’s failure that Jesus appears, starts over, patiently comes to him and calls him Simon (Jn 21:15) – the name Peter received when he was first called. The Lord does not wait for perfect situations or frames of mind: he creates them. He does not expect to encounter people without problems, disappointments, without sins or limitations. He himself confronted sin and disappointment in order to encourage all men and women to persevere. Brothers and sisters, the Lord never tires of calling us. His is the power of a Love that overturns every expectation and is always ready to start anew. In Jesus, God always offers us another chance. He calls us day by day to deepen our love for him and to be revived by his eternal newness. Every morning, he comes to find us where we are. He summons us to rise at his word, to look up and to realize that we were made for heaven, not for earth, for the heights of life and not for the depths of death”, and to stop seeking “the living among the dead (Homily at the Easter Vigil, 20 April 2019). When we welcome him, we rise higher and are able to embrace a brighter future, not as a possibility but as a reality. When Jesus’s call directs our lives, our hearts grow young.

God surprises. He is the Lord of surprises. He invites us not only to be surprised, but also to do surprising things. The Lord calls the disciples and, seeing them with empty nets, he tells them to do something odd: to fish by day, something quite out of the ordinary on that lake. He revives their trust by urging them once more to take a risk, not to give up on anyone or anything. He is the Lord of surprises, who breaks down paralyzing barriers by filling us with the courage needed to overcome the suspicion, mistrust and fear that so often lurk behind the mindset that says, We have always done things this way. God surprises us whenever he calls and asks us to put out into the sea of history not only with our nets, but with our very selves. To look at our lives and those of others as he does, for in sin, he sees sons and daughters to be restored; in death, brothers and sisters to be reborn; in desolation, hearts to be revived. Do not fear, then: the Lord loves your life, even when you are afraid to look at it and take it in hand (Homily at the Easter Vigil, 20 April 2019).

We can now turn to the third amazing thing: God calls and God surprises, because God loves. Love is his language. That is why he asks Peter, and us, to learn that language. He asks Peter: Do you love me? And Peter says yes; after spending so much time with Jesus, he now understands that to love means to stop putting himself at the centre. He now makes Jesus, and not himself, the starting point: You know everything (Jn 21:18), he says. Peter recognizes his weakness; he realizes that he cannot make progress on his own. And he takes his stand on the Lord and on the strength of his love, to the very end.

The Lord loves us: this is the source of our strength and we are asked to reaffirm it each day. Being a Christian is a summons to realize that God’s love is greater than all our shortcomings and sins. One of our great disappointments and difficulties today comes not from knowing that God is love, but that our way of proclaiming and bearing witness to him is such that, for many people, this is not his name. God is love, a love that bestows itself, that calls and surprises.

Here we see the miracle of God, who makes of our lives works of art, if only we let ourselves to be led by his love. Many of the witnesses of Easter in this blessed land created magnificent masterpieces, inspired by simple faith and great love. Offering their lives, they became living signs of the Lord, overcoming apathy with courage and offering a Christian response to the concerns that they encountered (cf Christus Vivit, 174). Today we are called to lift up our eyes and acknowledge what the Lord has done in the past, and to walk with him towards the future, knowing that, whether we succeed or fail, he will always be there to keep telling us to cast our nets.

Here I would like to repeat what I said to young people in my recent Exhortation. A young Church, young not in terms of age but in the grace of the Spirit, is inviting us to testify to the love of Christ, a love that inspires and directs us to strive for the common good. This love enables us to serve the poor and to become protagonists of the revolution of charity and service, capable of resisting the pathologies of consumerism and superficial individualism. Brimming with the love of Christ, be living witnesses of the Gospel in every corner of this city (cf Christus Vivit, 174-175). Do not be afraid of becoming the saints that this land greatly needs. Do not be afraid of holiness. It will take away none of your energy, it will take away none of your vitality or joy. On the contrary, you and all the sons and daughters of this land will become what the Father had in mind when he created you (cf Gaudete et Exsultate, 32).