Economy must be influenced by ethics

At 11:30am this morning in Rome (5:30am EDT), the Holy Father, Pope Francis received in audience the members of the Guido Carli Foundation and the Jury who awards the prize by that name on the occasion of the tenth anniversary of the creation of that Foundation. 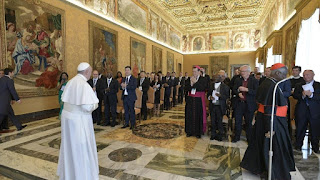 I am pleased to welcome you, representatives of the Guido Carli Foundation and the judges who award the prize that carries that name, on the tenth anniversary of your creation.  I cordially greet all of you and I thank Doctor Romana Liuzzo for her words.

Through your initiatives, you continue the work begun by Guido Carli, an economist and a statesman whose figure is marked by a strong sense of duty and a persevering commitment for the good of the community. Originally from the Brescia area, he took his first steps in the field of institutional responsibilities thanks to a priest friend of the Montinis, the family of the holy Pope Paul VI, to whom the Carlis were linked by ancient friendship.

We are all aware of the fact that, among the contradictions of today's society, there is also this: on the one hand, we are witnessing the prevalence of purely economic or financial criteria and of activities aimed at consumption; and on the other hand, an increasing inability to reconcile the right distribution of income with the enhancement of development prospects. It is important to reiterate that the economy renders a service to the common good if it remains linked to ethics, which is a universal measure of authentic human good.

Therefore, the social commitment of your Foundation, which intends to promote solidarity, is significant: this is a human value that, from a Christian perspective, fulfills the duty of evangelical charity. I welcome the awards you have given to men and women who have distinguished themselves throughout the world for their civil and ethical commitment. In Italy there are not a few exponents of culture, science, the world of work, volunteering and even the Church who, through their activity, represent positive examples and models worth imitating.

I take this opportunity to express my appreciation and I encourage you to persevere in your action, especially in favour of the weaker sections of society, as a stimulus for the growth of all its components. May the Lord support and bless your good intentions.
at 07:04