Meeting with participants from Caritas Internationalis

At 12:20pm today in Rome (6:20am EDT), in the Clementine Hall at the Vatican Apostolic Palace, the Holy Father, Pope Francis received in audience those who are participating in the XXI General Assembly of Caritas Internationalis, which is taking place in Rome from 23 to 28 May 2019, at the Ergife Hotel.  The theme of this gathering is: One Human Family, One Common Home. 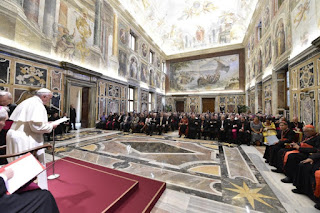 Speech of the Holy Father, Pope Francis
offered to delegates from Caritas Internationalis

Your Eminences,
Venerable brothers in the Episcopate and in the Priesthood,
Dear brothers and sisters,

I am pleased to have this opportunity to meet you at your XXI General Assembly. I thank Cardinal Tagle for the words he addressed to me and I address a cordial greeting to all of you, to the great family of Caritas and to all those in your respective countries who are engaged in the service of charity.

During these past few days, coming from all over the world, you have lived a significant moment in the life of your Confederation, aimed not only at fulfilling statutory duties, but also at strengthening the bonds of reciprocal communion in joining the Successor of Peter, because of the special link between your organization and the Apostolic See. In fact, Saint John Paul II wanted to confer on Caritas Internationalis the canonical public legal personality, calling you to share the very mission of the Church in the service of charity.

Today, I would like to pause and to reflect briefly with you on three key points: charity, integral development and communion.

Given the mission that Caritas is called to carry out in the Church, it is important to always return to reflect together on the meaning of the word charity itself. Charity is not a sterile performance or a simple offering aimed at devolving our conscience into silence. What we must never forget is that charity has its origin and its essence in God himself (cf Jn 4:8); charity is the embrace of God our Father toward everyone, especially to the smallest and the suffering, who occupy a preferential place in his heart. If we look at charity as a service, the Church would become a humanitarian agency and the service of charity its logistics department. But the Church is nothing in all this, it is something different and much greater: it is, in Christ, the sign and instrument of God's love for humanity and for all of creation, our common home.

The second word is integral development. In the service of charity the vision of man is at stake, which cannot be reduced to a single aspect but involves the whole human being as a child of God, created in his image. The poor are first and foremost persons, and their faces conceal that of Christ himself. They are his flesh, signs of his crucified body, and we have the duty to reach them even in the most extreme outskirts and in the basements of history with the delicacy and tenderness of Mother Church. We must aim at the promotion of the whole person and of all men so that they may be authors and protagonists of their own progress (cf Saint Paul VI, Encyclical Populorum progressio, 34). The service of charity must, therefore, choose the logic of integral development as an antidote to the culture of waste and indifference. And speaking to you, who are Caritas, I want to reiterate that the worst discrimination suffered by the poor is the lack of spiritual attention (Apostolic Exhortation Evangelii Gaudium, 200). You know it well: the greatest part of the poor possesses a special openness to the faith; they need God and we cannot fail to offer them his friendship, his blessing, his Word, the celebration of the Sacraments and the proposal of a journey of growth and maturation in the faith (EG, 200). Therefore, as the example of the saints and saints of charity teaches us, the preferential option for the poor must be translated mainly into a privileged and priority religious attention (EG, 200).

The third word is communion, which is central to the Church, defines its essence. Ecclesial communion arises from the encounter with the Son of God, Jesus Christ, who, through the proclamation of the Church, reaches men and creates communion with Himself and with the Father and the Holy Spirit (cf 1 Jn 1:3) . It is communion in Christ and in the Church that animates, accompanies and supports the service of charity both in the communities themselves and in emergency situations throughout the world. In this way, the diakonia of charity becomes a visible instrument of communion in the Church (cf Compendium of the Social Doctrine of the Church, 4). For this reason, as a Confederation you are accompanied by the Department for the Integral Human Development Service, which I thank for the work that you ordinarily carry out and, in particular, for supporting the ecclesial mission of Caritas Internationalis. I said that you are accompanied: you are not under.

Taking up these three fundamental aspects of living in Caritas, that is charity, integral development and communion, I would like to urge you to live them with a style of poverty, gratuitousness and humility.

We must always be careful not to fall into the temptation of living a hypocritical or deceitful charity, a charity identified with almsgiving, with charity, or as a calming pill for our restless consciences. This is why we must avoid assimilating the work of charity with philanthropic efficacy or with planning efficiency or with the exaggerated and effervescent organization.

Since charity is the most coveted of the virtues to which man can aspire in order to be able to imitate God, it is scandalous to see charity workers who transform it into a business: they talk so much about charity but live in luxury or dissipation or they organize Forums on charity wasting so much money uselessly. It is very bad to note that some charity workers turn into officials and bureaucrats.

This is why I would like to reiterate that charity is not an idea or a pious feeling, but is an experiential encounter with Christ; it is the desire to live with the heart of God who does not ask us to have a generic love, affection, solidarity, etc. for the poor, but to meet Himself in them (cf Mt 25: 31-46), in the style of poverty.

Dear friends, I thank you, on behalf of the whole Church, for what you do with and for so many brothers and sisters who are struggling, who are left on the sidelines, who are oppressed by the slavery of our day, and I encourage you to go on! May you all, in communion with the ecclesial communities to which you belong and of which you are an expression, continue to give your contribution with joy so that the Kingdom of God, the Kingdom of justice, love and peace may grow in the world. He always nourishes and illuminates the Gospel, and guides you in the teaching and pastoral care of the Mother Church.

May the Lord bless you and may Our Lady take care of you.  And please, don't forget to pray for me.  Thank you.
Original text in Italian
at 13:17