Mass with members of Caritas Internationalis

At 5:00pm this afternoon in Rome (11:00am EDT), at the Altar of the Chair inside the Vatican Basilica, the Holy Father, Pope Francis celebrated Mass on the occasion of the opening of the XXI General Assembly of Caritas Internationalis which is focused on the theme: A human family, a common home, inspired by Pope Francis' Encyclical Laudato si'. The General Assembly is taking place in Rome from 23 to 28 May 2019. 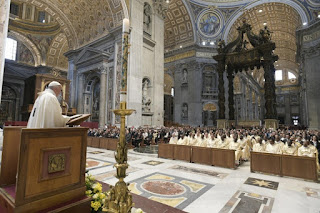 Homily of the Holy Father, Pope Francis
during the Mass celebrated with
Caritas Internationalis

The Word of God, in today's reading from the Acts of the Apostles, speaks of the first great meeting in the history of the Church. An unexpected situation had occurred: the pagans came to the faith. And a question arose: would they have to adapt, like the others, to all the norms of the ancient law? It was a difficult decision to make and the Lord was no longer present. One might ask: why hadn't Jesus left a suggestion to resolve at least this first great debate (Acts 15: 7)? A small indication would have been enough for the Apostles, who had been with him every day for years. Why had Jesus not always given clear and quickly resolving rules?

This is the temptation of efficiency, of thinking that the Church is all right if she has everything under control, if she lives without shocks, with her agenda always in order, all regulated ... This is also the temptation of casuistry. But the Lord does not proceed like this; in fact to his followers he does not send an answer, he sends the Holy Spirit. And the Spirit does not come bearing the agenda, it comes in the form of fire. Jesus does not want the Church to be a perfect model, which welcomes its own organization and is capable of defending its good name. Those poor particular Churches that struggle so much in their organization, their plans, trying to have everything clear, all distributed. It makes me suffer. Jesus did not live like this, but on the way, without fearing the shocks of life. The Gospel is our program of life, that's everything. He teaches us that questions are not dealt with with the ready recipe and that faith is not a roadmap, but rather a Way (Acts 9: 2) to travel together, always together, with a spirit of trust. From the account of the Acts we learn three essential elements about the Church on its way: the humility of listening, the charism of the whole and the courage of renunciation.

Let's start with the end: the courage of renunciation. The outcome of that great discussion was not to impose something new, but to leave something old. But those early Christians did not abandon anything from nothing: they were important religious traditions and precepts, dear to the chosen people. Religious identity was at stake. However, they chose that the proclamation of the Lord comes first and is worth more than everything. For the sake of the mission, to announce to anyone, in a transparent and credible way, that God is love, even those beliefs and human traditions that are more of an obstacle than a help, can and must be left. The courage to leave. We too need to rediscover together the beauty of renunciation, above all of ourselves. Saint Peter says that the Lord purified hearts with faith (cf Acts 15: 9). God purifies, God simplifies, God often makes us grow by removing something, not adding, as we would do. True faith purifies us from attachments. To follow the Lord one must walk fast and to walk fast one must lighten the load, even if it costs. As a Church, we are not called to compromise business, but to be filled with evangelical outbursts. And in purifying ourselves, in reforming ourselves we must avoid leopardianism, that is to pretend to change something so that in reality nothing changes. This happens for example when, in order to try to keep up with the times, the surface of things is put on a little, but it's just make-up to look young. The Lord does not want cosmetic adjustments, he wants the conversion of the heart, which passes through renunciation. Coming out of oneself is the fundamental reform.

Let's see how the first Christians got there. They came to the courage of renunciation starting from the humility of listening. They practiced selflessness: we see that each of them lets the other speak and is willing to change their beliefs. They knew how to listen only to those who let the voice of the other really enter into them. And when interest in others grows, selflessness increases. You become humble by following the path of listening, which holds you back from wanting to affirm, from resolutely pursuing your own ideas, from seeking consensus with every means. Humility is born when, instead of speaking, we listen; when we stop insisting on being in the centre. Then it grows through humiliation. It is the path of humble service, the path that Jesus traveled. It is along this path of charity that the Spirit descends and directs us.

For those who want to follow the paths of charity, humility and listening mean that the ear must be aimed at the little ones. Let us look again to the first Christians: all of them were silent in order to listen to Barnabas and Paul. They were the last to arrive, but they let them report all that God had done through them (cf Acts15:12). It is always important to listen to everyone's voice, especially the little ones and the last ones. In the world those who have more means speak more, but between us it cannot be like this, because God loves to reveal himself through the small and the last. And everyone asks not to look at anyone from the top down. It is permissible to look at a person from the top down only in order to help him or her stand up; this is the only time, otherwise you can't.

And finally, listening to life: Paul and Barnabas talk about experiences, not ideas. The Church makes such discernment; not in front of the computer, but in front of the reality of people. Ideas are discussed, but situations are discerned. People must always come before programs, with the humble gaze of one who knows how to seek in others the presence of God, who does not live in the greatness of what we do, but in the smallness of the poor we meet. If we don't look directly at them, we end up always looking at ourselves; and making them instruments of our affirmation, we use others.

From the humility of listening to the courage of renunciation, everything passes through the charism of the whole. In fact, in the discussion of the early Church, unity always prevails over differences. For each of them, in the first place there are not one's own preferences and strategies, but being and feeling that they are part of the Church of Jesus, gathered around Peter, in charity that does not create uniformity, but communion. No one knew everything, no one had the totality of charisms, but each held to the charisma of the whole. It's essential, because you can't really do good without really caring for yourself. What was the secret of those Christians? They had different sensibilities and orientations, there were also strong personalities, but there was the strength to love each other in the Lord. We see this in James who, at the time of drawing conclusions, says a few words of his own and cites a lot from the Word of God (cf Acts 15:16-18). Let the Word speak. While the voices of the devil and the world lead to division, the voice of the Good Shepherd forms one flock. And so the community is based on the Word of God and remains in his love.

Remain in my love (Jn 15: 9): it is what Jesus asks in the Gospel. How do we do this? We must stay close to him, broken bread. It helps us to stand before the tabernacle and before the many living tabernacles that are the poor. The Eucharist and the poor, a fixed tabernacle and mobile tabernacles: there, one remains in love and the mentality of broken bread is absorbed. There, one understands the how of which Jesus speaks: As the Father has loved me, I too have loved you (Jn 15:9). And how did the Father love Jesus? By giving everything, not holding back anything for himself. We say this in the Creed: God from God, light from light; gave him everything. When instead we hold back from giving, when in the first place there are our interests to defend, we do not imitate God's how, we are not a free and liberating Church. Jesus asks us to remain in Him, not in our ideas; to get out of the pretence of controlling and managing; he asks us to trust others and to give ourselves to others. We ask the Lord to free us from efficiency, from worldliness, from the subtle temptation to worship ourselves and our skill, from obsessive organization. We ask for the grace to accept the way indicated by the Word of God: humility, communion, renunciation.
Original text in Italian