The Holy Father has sent a video greeting to the people of Bulgaria, just days before his Apostolic Voyage which will take place from 5-7 May at the invitation of the highest authorities of that country. 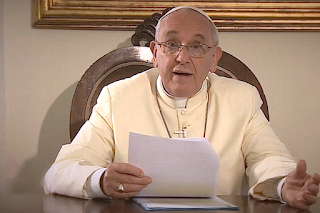 Video Message of His Holiness, Pope Francis
sent to the faithful in Bulgaria

Dear sisters and brothers in Bulgaria!

With God's help, I will be with you in just a few days.  Coming to Bulgaria will be a pilgrimage for me and for my co-workers in the name of faith, unity and peace.

In fact, your land has been home to witnesses to the faith, since the time when the holy brothers Cyril and Methodius sowed the Gospel there: a fruitful sowing that has borne abundant fruit even in the difficult periods of the last century. Saint John Paul II often repeated this; in fact he repeated over and over the fact that Europe rediscovered the liberating power of Christ; and in this way, Europe could resume breathing with its two lungs. In his footsteps I will have the joy of meeting His Holiness, the Patriarch and the Holy Synod of the Bulgarian Orthodox Church. Together we will manifest the will to follow the Lord Jesus in the journey of fraternal communion among all Christians.

Dear friends, my pilgrimage will be accomplished in memory of the Holy Pope John XXIII, who during the nearly ten years spent in Sofia as an Apostolic Delegate, created with your people a bond of esteem and affection that continues to this day. He was a man of faith, of communion and of peace. For this reason I have chosen as the motto of this Journey the title of its historic Encyclical Pacem in terris - Mir na zemyata. I ask you to please to accompany me with your prayer. Thank you!

May God grant peace and prosperity to Bulgaria!