Upon his arrival at the International Airport in Bucarest, the Holy Father, Pope Francis was welcomed by the President of Romania, Mister Klaus WernerIohannis, and his wife.  Then, two children dressed in traditional attire presented flowers to the Pope.  There were approximately 400 faithful in attendance.

After having inspected the Guard of Honour, before entering the Airport's Presidential Lounge, Pope Francis greeted the Bishops of Romania.  Then, he travelled by car to the Cotroceni Palace, the seat of the President of the Romanian Republic, for the official welcoming ceremony. 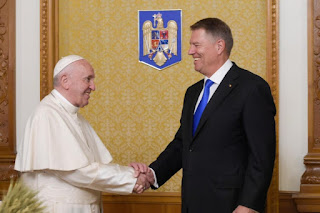 Upon his arrival, at 12:22pm (5:22am EDT), the Holy Father, Pope Francis was welcomed by the President of the Republic and by his wife at the entrance to the Cotroceni Presidential Palace complex.

After the playing of some hymns, the presentation of military honours and the introductions of the respective delegations, the Pope travelled by car to the Presidential Palace where, at 12:38pm (5:38am EDT), he paid a courtesy visit to the President of Romania, Mister Klaus Werner Iohannis.  The Pope and the President posed for an official photograph.  Then, they went together to the Honour Room where, after having signed the Guest Book, and having exchanged gifts, they met privately. 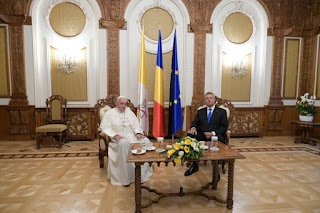 At the conclusion of their talk, the Holy Father and the President went together to the Ambassador Room where the Pope met the members of the President's family.  The Holy Father then went to the Blue Room, inside the Presidential Palace where he met privately with the Prime Minister of Romania, Ms. Vasilica Viorica Dăncilă.

At the conclusion of that meeting, Pope Francis greeted the Prime Minister's husband.  Then, together with the President of the Republic, he made his way to the Unirii Room where he met with local Authorities.

At 1:15pm local time (6:15am EDT), in the Unirii Room at the Presidential Palace in Bucarest, the Holy Father, Pope Francis met with local Authorities, leaders from Civil Society and members of the Diplomatic Corps.

Following a few words of greeting offered by the President of Romania, Mister Klaus Werner Iohannis, Pope Francis shared his speech.  At the conclusion of his remarks, the Holy Father travelled by car to the Apostolic Nunciature in Bucarest. 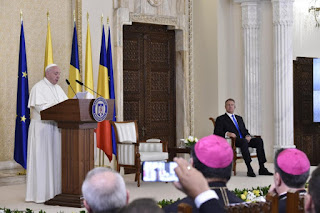 Greetings of the Holy Father, Pope Francis
offered to representatives of Civil Society
and members of the Diplomatic Corps

I offer a cordial greeting and express my gratitude to Their Excellencies the President and the Prime Minister for the invitation to visit Romania and for their kind words of welcome, extended also in the name of the other Authorities of the nation, and of this beloved people. I greet the members of the Diplomatic Corps and the representatives of civil society gathered here.

I greet with fraternal love my brother Daniel. My respectful greeting goes likewise to all the Metropolitans and Bishops of the Holy Synod, and to all the faithful of the Romanian Orthodox Church. With affection, I greet the Bishops and priests, men and women religious, and all the members of the Catholic Church, whom I have come to confirm in faith and to encourage on their journey of life and Christian witness.

I am happy to find myself in your beautiful land twenty years after the visit of Saint John Paul II and in this semester when Romania, for the first time since its entrance into the European Union, holds the presidency of the Council of Europe.

This is a fitting time to think back on the thirty years that have passed since Romania was liberated from a regime that oppressed civil and religious liberty, isolated the nation from other European countries, and led to the stagnation of its economy and the exhaustion of its creative powers. In these years, Romania has been committed to building a sound democracy through the plurality of its political and social forces and their reciprocal dialogue, through the fundamental recognition of religious freedom and through the country’s full participation on the greater international stage. It is important to acknowledge the great strides made on this journey, despite significant difficulties and privations. The determination to advance in various areas of civil, social, cultural, and scientific life has released much energy and generated many projects; it has unleashed great creative forces that had previously been pent up, and has encouraged a number of new initiatives that have guided the country into the twenty-first century. I trust that you will carry forward these efforts to consolidate the structures and institutions needed to respond to the legitimate aspirations of the citizenry and to encourage the nation’s people to realize its full potential and native genius.

At the same time, it must be acknowledged that while the changes brought by the dawn of this new era have led to genuine achievements, they have also entailed inevitable hurdles to be overcome and problematic consequences for social stability and the governance of the territory itself. I think in the first place of the phenomenon of emigration and the several million people who have had to leave their homes and country in order to seek new opportunities for employment and a dignified existence. I think too of the depopulation of many villages, which have lost many of their inhabitants, the effects of this on the quality of life in those areas, and the weakening of the profound cultural and spiritual roots that have sustained you in difficult times, in times of trial. At the same time, I pay homage to the sacrifices endured by so many sons and daughters of Romania who, by their culture, their distinctive identity and their industriousness, have enriched those countries to which they have emigrated, and by the fruit of their hard work have helped their families who have remained at home. To think of our brothers and sisters abroad is an act of patriotism, an act of fraternity, an act of justice. Continue to do so.

Confronting the problems of this new chapter of history, identifying effective solutions, and finding the resolve to implement them, calls for greater cooperation on the part of the nation’s political, economic, social and spiritual forces. It is necessary to move forward together in unity and conviction in following the highest calling to which every state must aspire: that of responsibility for the common good of its people. To move forward together, as a way of shaping the future, requires a noble willingness to sacrifice something of one’s own vision or best interest for the sake of a greater project, and thus to create a harmony that makes it possible to advance securely towards shared goals. This is the basis of a society’s nobility.

This is the path to the building of an inclusive society, one in which everyone shares his or her own gifts and abilities, through quality education and creative, participatory and mutually supportive labour (cf Evangelii Gaudium, 192). In this way, all become protagonists of the common good, where the weak, the poor and the least are no longer seen as undesirables that keep the machine from functioning, but as citizens and as brothers and sisters to be fully incorporated into the life of society. Indeed, how they are treated is the best indicator of the actual goodness of the social model that one is attempting to build. Only to the extent that a society is concerned for its most disadvantaged members, can it be considered truly civil.

This entire process needs to have a heart and soul, and a clear goal to achieve, one imposed not by extrinsic considerations or by the growing power of centres of high finance, but by an awareness of the centrality of the human person and of his or her inalienable rights (cf Evangelii Gaudium, 203). For a harmonious and sustainable development, the concrete practice of solidarity and charity, and the increased concern of social, civil and political forces for the pursuit of the common good, it is not enough to modernize economic theories, or professional techniques and abilities, however necessary these in themselves may be. It requires developing not just material conditions but the very soul of your people. Because peoples have a soul; they have their own way of perceiving and experiencing reality. To keep going back to its very soul: this is what makes a people progress.

In this regard, the Christian Churches can help to rediscover and strengthen the beating heart that can be the source of a political and social action based on the dignity of the person and leading to commitment to work with fairness and generosity for the overall common good. At the same time, they themselves seek to become a credible reflection of God’s presence and an attractive witness to his works, and, in this way, they grow in authentic mutual friendship and cooperation. This is the path that the Catholic Church wishes to follow. She desires to contribute to the building up of society. She desires to be a sign of harmony in the hope of unity and to be at the service of human dignity and the common good. She wishes to cooperate with the civil authorities, with the other Churches and with all men and women of good will, journeying together with them and placing her specific gifts at the service of the entire community. The Catholic Church is no stranger to this; she shares fully in the spirit of the nation, as is demonstrated by the participation of her faithful in the shaping of the country’s future and in the creation and development of the structures of integral education and forms of charitable assistance suited to a modern state. In this way, she desires to contribute to the building up of society and of civil and spiritual life in your beautiful land of Romania.

In offering my prayerful good wishes for Romania’s prosperity and peace, I invoke upon you, your family, upon all those here present, and upon all the country’s people an outpouring of God’s blessings and the protection of the Holy Mother of God.