Greetings for the students and professors from the Pontifical Biblical Institute

At 9:30am this morning (3:30am EDT), in the Clementine Hall at the Vatican Apostolic Palace, the Holy Father, Pope Francis received in audience the Teachers and Students from the Pontifical Biblical Institute and those participating in a Conference on the subject: Jesus and the Pharisees: an interdisciplinary review, which is taking place on the occasion of the 110th anniversary of the establishment of that Institute. 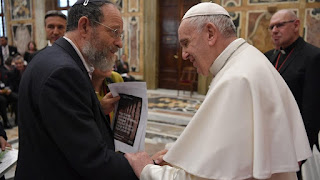 Prepared speech presented by His Holiness, Pope Francis
to those attending the audience

Note: the Holy Father added a few unscripted words to this prepared speech, affirming his wish to greet each of the participants individually.

As the Pontifical Biblical Institute celebrates the 110th anniversary of its foundation, I offer you a warm welcome. I thank the Rector for his kind words. When my Predecessor Saint Pius X founded the Pontifical Biblical Institute in 1909, he entrusted it with the mission of being a centre of specialized studies in Sacred Scripture in Rome, in order to promote as effectively as possible biblical teaching and related studies, in accordance with the spirit of the Catholic Church (Apostolic Letter Vinea Electa, 7 May 1909: AAS 1 [1909], 447-448).

In these years, the Biblicum has worked to remain faithful to its mission, even in challenging times, and has contributed much to promote scholarly research and teaching in biblical studies and related fields for students and future professors, who now come from some seventy different countries. Cardinal Augustin Bea, long-serving Rector of the Biblicum before his elevation to the cardinalate, was the driving force behind the conciliar Declaration Nostra Aetate, which set inter-religious relations, and Catholic-Jewish relations in particular, on a new footing. In recent years, the Institute has strengthened its ties with Jewish and Protestant scholars.

I also greet the participants taking part in the Conference Jesus and the Pharisees: An Interdisciplinary Reappraisal, which addresses a specific issue important for our time, which is a direct result of Nostra Aetate. The Conference seeks to understand the at times polemical treatment of the Pharisees in the New Testament and in other ancient sources. In addition, it examines the history of scholarly and popular interpretations among both Jews and Christians. Among Christians and in secular society, in different languages the word Pharisee often means a self-righteous or hypocritical person. For many Jews, however, the Pharisees are the founders of rabbinic Judaism and hence their own spiritual forebears.

The history of interpretation has fostered a negative image of the Pharisees, often without a concrete basis in the Gospel accounts. Often, over the course of time, that image has been attributed by Christians to Jews in general. In our world, sadly, such negative stereotypes have become quite common. One of the most ancient and most damaging stereotypes is that of a Pharisee, especially when used to cast Jews in a negative light.

Recent scholarship has come to realize that we know less about the Pharisees than previous generations thought. We are less certain about their origins and about many of their teachings and practices. Your Conference’s examination of interdisciplinary research into literary and historical questions regarding the Pharisees will contribute to a more accurate view of this religious group, while also helping to combat antisemitism.

If we look at the New Testament, we see that Saint Paul, before his encounter with the Lord Jesus, counted as a reason for pride the fact that he was as to the Law, a Pharisee (Phil 3:5-8).

Jesus had numerous discussions with Pharisees about common concerns. He shared with them a belief in the resurrection (Mk 12:18-27) and he accepted other aspects of their interpretation of the Torah. Jesus and the Pharisees must have had much in common, for the Acts of the Apostles tells us that some Pharisees joined the followers of Jesus in Jerusalem (Acts 15:5). Acts also presents Gamaliel, a leader of the Pharisees, defending Peter and John (cf Acts 5:34-39).

Among the more significant moments in the Gospel of John we find Jesus’ encounter with a Pharisee named Nicodemus, one of the leaders of the Jews (cf Jn 3:1). To Nicodemus Jesus explains that, God so loved the world that he gave his only Son, so that everyone who believes in him may not perish but may have eternal life (Jn 3:16). Nicodemus would then defend Jesus before an assembly (Jn 7:50-52) and subsequently be present at his burial (Jn 19:39). Whatever view one takes of Nicodemus, it is clear that the various stereotypes about the Pharisees do not apply to him, nor do they find confirmation elsewhere in John’s Gospel.

Another encounter between Jesus and the religious leaders of his day is reported in different ways in the Synoptic Gospels. It has to do with the question of the great or first commandment. In the Gospel of Mark (Mk 12:28-34), the question is asked by a scribe, otherwise not identified, who initiates a respectful exchange with a teacher. In the Gospel of Matthew, the scribe becomes a Pharisee trying to test Jesus (Mt 22:34-35). In Mark’s account, Jesus concludes by saying, You are not far from the kingdom of God (Mk 12:34), thereby showing the high regard Jesus had for those religious leaders who were truly close to the kingdom of God.

Rabbi Aqiba, one of the most famous rabbis of the second century and an heir to Pharisaic traditions,[1] pointed to the words love your neighbour as yourself (Lev 19:18) as a great principle of the Torah.[2] According to tradition, he died as a martyr with the Shema on his lips, which includes the commandment to love the Lord with all one’s heart, soul and strength (cf Deut 6:4-5).[3] As far as we can know, then, he would have been substantially in agreement with Jesus and his scribe or Pharisee interlocutor. Likewise, the so-called Golden Rule, albeit in various formulations, is attributed not only to Jesus but also to his older contemporary Hillel, usually considered one of the leading Pharisees of his time. The rule is already present in the deuterocanonical book of Tobit (Tob 4:15[16]).

Love of neighbour, then, represents a significant indicator for recognizing affinities between Jesus and his Pharisee interlocutors. It certainly constitutes an important basis for any dialogue, especially among Jews and Christians, even today.

Indeed, to love our neighbours better, we need to know them, and in order to know who they are we often have to find ways to overcome ancient prejudices. For this reason, your Conference, crossing faiths and disciplines in its effort to attain a fuller and more accurate understanding of the Pharisees, will make it possible to present them more appropriately in teaching and preaching. I am certain that these studies, and the new avenues they will open, will positively contribute to the relationship between Jews and Christians, in view of an ever more profound and fraternal dialogue. May your Conference find a broad echo within and outside the Catholic Church, and may your work receive abundant blessings from the Most High or, as many of our Jewish brothers and sisters would say, from Hashem. Thank you.