General Audience: He showed himself to them

This morning's General Audience began at 8:55am local time (2:55am EDT) in Saint Peter's Square, where the Holy Father, Pope Francis met with groups of pilgrims and the faithful from Italy and from every corner of the world.

In his speech, the Pope began a new cycle of catecheses on the Acts of the Apostles, adding his meditation on the theme: He showed himself alive to them ... and ordered them ... to await the fulfillment of the Father's promise (Acts 1:3-4). 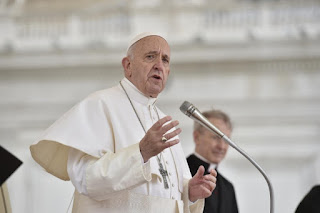 Today we begin a course of catechesis through the Book of the Acts of the Apostles. This biblical book, written by Saint Luke the Evangelist, tells us about the journey - a journey: but which journey? About the journey of the Gospel in the world, and it shows us the marvellous union between the Word of God and the Holy Spirit that inaugurates the time of evangelization. The protagonists of the Acts are just a lively and effective couple: the Word and the Spirit.

God sends his message to earth and his word runs fast - says the Psalm (Ps 147.4). The Word of God runs, it is dynamic, it irrigates every ground on which it falls. And what is its strength? Saint Luke tells us that the human word becomes effective not through rhetoric, which is the art of good talk, but thanks to the Holy Spirit, who is the dýnamis of God, the dynamic energy of God, his strength, which has the power to purify the word, to make it the bearer of life. For example, in the Bible there are stories, human words; but what is the difference between the Bible and a history book? It is that the words of the Bible are taken by the Holy Spirit who gives them very great strength, a different kind of strength and the Holy Spirit helps us to make that word a seed of holiness, a seed of life, so that it becomes effective. When the Spirit visits the human word it becomes dynamic, like dynamite, that is able to light up hearts and blow up patterns, resistances and walls of division, opening up new ways and expanding the boundaries of God's people. And we will see this in the course of these catecheses, in the book of the Acts of the Apostles.

The only one who gives vibrant sonority and incisiveness to our fragile human word, who is even capable of lying and escaping from its responsibilities, is the Holy Spirit, through whom the Son of God was generated; the Spirit who anointed him and sustained him in the mission; the Spirit through which he chose his apostles and who guaranteed perseverance and fruitfulness in their proclamation, as he also guarantees them today in our proclamation.

The Gospel ends with the resurrection and ascension of Jesus, and the narrative plot of the Acts of the Apostles starts right there, from the overabundance of the life of the Risen One transfused into his Church. Saint Luke tells us that Jesus showed himself ... alive, after his passion, with many trials, during forty days, appearing ... and speaking of things concerning the kingdom of God (Acts 1:3). The Risen Christ, the Risen Jesus, uses very human gestures, like sharing a meal with his friends, and he invites them to trustingly await the fulfillment of the Father's promise: you will be baptized in the Holy Spirit (Acts 1:5).

In fact, baptism in the Holy Spirit is the experience that allows us to enter into a personal communion with God and to participate in his universal salvific will, acquiring the gift of parresia, courage, that is the ability to utter a word as children of God, not only as men, but as children of God: a clear word, free, effective, full of love for Christ and for our brothers and sisters.

There is therefore no struggle to earn or merit the gift of God. Everything is given for free and in due time. The Lord gives everything for free. Salvation cannot be bought, it is not paid for: it is a free gift. Faced with the anxiety of knowing in advance the time in which the events announced by Him will happen, Jesus tells his disciples: It is not up to you to know times or moments that the Father has reserved for his power, but you will receive strength from the Holy Spirit who will come down upon you, and about me you will be witnesses in Jerusalem, in all Judea and Samaria and to the ends of the earth (Acts 1,7-8).

The Risen Christ invites his own people not to live the present with anxiety, but to make an alliance with time, to know how to wait for the unraveling of a sacred history that has not been interrupted but is advancing - it always goes on; to know how to wait for the steps of God, the Lord of time and space. The Risen One invites his people not to manufacture the mission by themselves, but to wait for the Father to energize their hearts with his Spirit, to be able to get involved in providing a missionary witness that is capable of radiating from Jerusalem to Samaria and going beyond the borders of Israel to reach the outskirts of the world.

This expectation, the Apostles live it together, they live it as the family of the Lord, in the Upper Room or in the Cenacle, whose walls are still witnesses of the gift with which Jesus consigned himself to his own in the Eucharist. And how did they await the strength, the dýnamis of God? By praying with perseverance, as if there were not so many but one. Praying in unity and with perseverance. In fact, it is through prayer that one overcomes loneliness, temptation, suspicion and opens our hearts to communion. The presence of women and of Mary, the mother of Jesus, intensifies this experience: they first learned from the Master to bear witness to the fidelity of love and the strength of communion that overcomes all fear.

Let us also ask the Lord for patience as we wait for his steps, for not wanting to manufacture his work in us, but rather the patience we need to remain docile by praying, invoking the Spirit and cultivating the art of ecclesial communion.

The Holy Father's catechesis was then summarized in various languages, and His Holiness offered greetings to each group of pilgrims in attendance.  To English-speaking pilgrims, he said:

I greet the English-speaking pilgrims and visitors taking part in today’s Audience, especially those from England, Sweden, Australia, New Zealand, Malaysia, the Philippines, Vietnam, Canada and the United States of America. In the joy of the Risen Christ, I invoke upon you and your families the loving mercy of God our Father. May the Lord bless you all!
Original text in Italian
at 10:29