At 9:15am this morning in Rome, the IV Sunday of Easter and the 56th World Day of Prayer for Vocations, the Holy Father, inside the Vatican Basilica, the Holy Father, Pope Francis presided at the celebration of the Eucharist during which he conferred Presbyteral (Priestly) Ordination to 19 deacons, 8 of whom are from the Redemptoris Mater Diocesan College, 8 from the priestly Fraternity of the Sons of the Cross, 1 from the Pontifical Major Seminary in Rome and 2 from other Colleges. 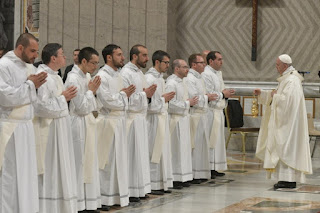 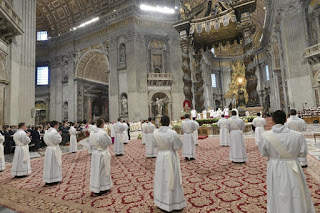 The Holy Father's homily was based on the homily proposed in the Ritual for the Ordination of Priests, while adding a few of his own considerations. 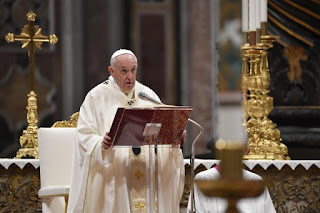 Homily of the Holy Father, Pope Francis
for the Mass of Priestly Ordination

These brothers of ours have been called to the Order of presbyter.  It would be good for all of us to think carefully about the ministry to which they will be elevated in the Church. As you know, dear brethren, the Lord Jesus is the only High Priest of the New Testament, but in him, all the holy people of God too have been constituted as a priestly people. Nevertheless, among all his disciples, the Lord Jesus wants to choose some in particular, because by publicly exercising the priestly office in the Church in his name, in favor of all men, he continues his personal mission as our teacher, priest and pastor.

In fact, because of this, he was sent by the Father; therefore he in turn sent into the world, first the Apostles and then the Bishops and their successors, to whom presbyters were finally given as collaborators.  United to them in the priestly ministry, you are called to serve the People of God.

After many years of reflection - their reflection, reflection of the superiors, of those who accompanied you on this path -, today these brothers of ours have presented themselves so that I may confer on them the priestly order. They will in fact be configured to Christ the Supreme and Eternal Priest, or they will be consecrated as true priests of the New Testament, and for this reason, which unites them in the priesthood to their Bishop, they will be preachers of the Gospel, Pastors of the People of God, and will preside over the actions of worship, especially in the celebration of the Lord's sacrifice, that is, in the Eucharist.

As for you, dear brothers and beloved sons who are about to be promoted to the order of the presbyterate, consider that by exercising the ministry of the Sacred Doctrine you will be participants in the mission of Christ, the only Shepherd. This is not a cultural association, it is not a union. You will be participants in the ministry of Christ. Share with everyone that Word of God, which you yourselves have received with joy. And for this reason, you must read and meditate assiduously on the Word of the Lord; you should believe what you have read and teach what you have learned in faith, so that you may live what you have taught. One can never give a homily or preach, without much prayer, with the Bible in hand. Don't forget about this.

Therefore, let your doctrine be nourishment for the People of God: when it comes from the heart and is born of prayer, it will be very fruitful. May the perfume of your life be joy and support for the faithful of Christ: be men of prayer, men of sacrifice, so that by means of your Word and example you  may build the house of God, which is the Church. And so you will continue the sanctifying work of Christ. Through your ministry, the spiritual sacrifice of the faithful is made perfect, because it is combined with the sacrifice of Christ, which in your hands, in the name of the whole Church, is offered in a bloodless way on the altar in the celebration of the Holy Mysteries. Be careful in the celebration of the Eucharist. So recognize what you do. Imitate what you celebrate because by participating in the mystery of the Lord's death and resurrection, you carry the death of Christ in your members and walk with Him in newness of life. The Lord wanted to save us for free. He himself told us: Give freely what you have freely received. The celebration of the Eucharist is the culmination of the Lord's free gift. Please don't mess it up with petty interests.

Through Baptism you will add new faithful to the People of God. In the Sacrament of Penance you will forgive sins in the name of God, of Christ, of the Church. And here, please, I ask you not to tire of being merciful. Merciful as the Father, as Jesus was merciful to us, to all of us. With holy oil you will give relief to the sick. Be willing to waste time visiting the sick, celebrating the sacred rites and raising the prayer of praise and supplication in the various hours of the day; in so doing, you will make yourselves the voice of the People of God and of all humanity.

Aware of having been chosen from among men and constituted in their favour to await the things of God, exercise the priestly work of Christ in joy and charity, with sincerity, solely intent on pleasing God and not yourselves. Priestly joy is found only on this path, seeking to please God who has chosen us. Finally, by participating in the mission of Christ, the Head and Pastor, in filial communion with your Bishop, commit yourselves to uniting the faithful into one family. Here is the true meaning of the closeness of the priest: you must strive to be close to God in prayer, close to the bishop who is your father, close to the presbyterum - to other priests - as brothers, without peeling one another (speaking ill of one another, and be close to the People of God. Always have before your eyes the example of the Good Shepherd, who did not come to be served, but to serve and to seek and save those who were lost.
Original text in Italian