General Audience: Do not abandon us

This morning's General Audience began at 9:10am local time (3:10am EDT) in Saint Peter's Square in Rome, where the Holy Father, Pope Francis met with groups of pilgrims and the faithful from Italy and from every corner of the world.

In his speech, the Pope continued his cycle of catecheses on the Our Father, adding his meditation on the theme: Do not abandon us in temptation (1 Cor 10:13).

The General Audience concluded with the chanting of the Our Father and the Apostolic blessing. 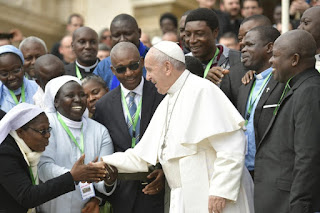 We continue the catechesis on the Our Father, arriving now at the penultimate invocation: "Do not abandon us in temptation (Mt 6:13). Another version says: Do not let us fall into temptation. The Our Father begins in a serene way: it makes us wish that God's great plan can be accomplished among us. Then he takes a look at life, and asks us what we need every day: our daily bread. Then the prayer turns to our interpersonal relationships, often polluted by selfishness: we ask for forgiveness and we commit ourselves to forgiving others. But it is with this penultimate invocation that our dialogue with the heavenly Father enters - so to speak - into the heart of the drama, that is, the terrain of confrontation between our freedom and the snares of the evil one.

As is well known, the original Greek expression contained in the Gospels is difficult to render exactly, and all modern translations are somewhat weak. On one element, however, we can unanimously converge: however we might understand the text, we must exclude the consideration that it is God who is the protagonist of the temptations that hang over the path of mankind. As if God were lurking to lay traps and pitfalls for his children. An interpretation of this kind contrasts above all with the text itself, and it is far from the image of God that Jesus revealed to us. Let us not forget: the Our Father begins with the word Father. And a father does not create pitfalls for his children. Christians have nothing to do with an envious God, in competition with man, or one who enjoys putting him to the test. These are the images of many pagan deities. We read in the Letter of James the Apostle: No one, when tempted, should say: I am tempted by God; because God cannot be tempted to evil and he does not tempt anyone (Jas 1:13). Rather, the opposite is true: the Father is not the author of evil, no son who asks for a fish receives a snake (cf Lk 11:11) - as Jesus teaches - and when evil appears in man's life, God fights alongside us, so that we can be freed. A God who always fights for us, not against us. And a father! It is in this sense that we pray the Our Father.

These two moments - trial and temptation - were mysteriously present in the life of Jesus himself. In this experience the Son of God became completely our brother, in a way that is almost scandalous. And it is precisely these Gospel passages that show us that the most difficult invocations of the Our Father, those that close the text, have already been answered: God has not left us alone, but in Jesus he manifests himself as God-with-us to the depth of extreme consequences. He is with us when he gives us life, he is with us during our lives, he is with us in joy, he is with us in trials, he is with us in sadness, he is with us in defeat, when we sin, but he is always with us, because he is a Father and cannot abandon us.

If we are tempted to do evil, to deny fraternity with others and to desire absolute power over everything and everyone, Jesus has already fought this temptation for us: the first pages of the Gospels attest to this. Immediately after receiving the baptism from John, in the midst of the crowd of sinners, Jesus retired to the desert and there he was tempted by Satan. Thus begins the public life of Jesus, with the temptation that comes from Satan. Satan was present. Many people say: But why should we talk about the devil? That is an ancient thing? The devil does not exist. But look at what the Gospel teaches: Jesus confronted the devil, he was tempted by Satan. But Jesus rejects every temptation and comes out victorious. The Gospel of Matthew has an interesting note that concluded the fight between Jesus and the Enemy: Then the devil left him, and behold, angels came to him and served him (Mt 4:11).

But even in times of the supreme trial God does not leave us alone. When Jesus goes to Gethsemane to pray, his heart is invaded by an unspeakable anguish - he says this to his disciples - and he experiences solitude and abandonment. Alone, with the responsibility of all the sins of the world on his shoulders; alone, with unspeakable anguish. The proof is so lacerating that something unexpected happens. Jesus never asks for love for himself, yet on that night he feels his soul is sad to the point of death, and then asks for the closeness of his friends: Stay here and keep watch with me (Mt 26:38). As we know, the disciples, weighed down by numbness that was caused by fear, fell asleep. In his time of agony, God asks man not to abandon him, and man instead falls asleep. On the other hand, in the time in which man faces his trials, God watches. In the worst moments of our lives, in the most suffering moments, in the most distressing moments, God watches with us, God fights for us, God is always close to us. Why? Because he is our Father. This is the way we started the prayer: Our Father. And a father does not abandon his children. That night of Jesus' pain, of his struggle, are the last seal of the Incarnation: God descends to find us in our abysses and in the travails that dot our history.

This is our comfort at the hour of our trial: to know that the valleys are no longer deserted, since Jesus had also crossed them, but rather they have been blessed by the presence of the Son of God.  He will never abandon us!

Therefore remove from us, O God, the time of trial and temptation. But when this time comes for us, our Father, show us that we are not alone. You are our Father. Show us that Christ has already taken upon himself the weight of that cross. Show us that Jesus calls us to carry the cross with him, trusting in your love as our Father. Thank you.

The Holy Father's catechesis was then summarized in various languages, and His Holiness offered greetings to each group of the faithful in attendance.  To English-speaking parishioners, he said:

I greet the English-speaking pilgrims and visitors taking part in today’s Audience, especially those from England, Scotland, Denmark, Finland, Cameroon, Japan, India, Indonesia, Canada and the United States of America. In the joy of the Risen Christ, I invoke upon you and your families the loving mercy of God our Father. May the Lord bless you all!
Original text in Italian
at 08:19