Greetings for the Childrens' Hospital of Florence

At 11:15am this morning (5:15am EDT), in the Consistory Hall at the Vatican Apostolic Palace, the Holy Father, Pope Francis received in audience the Directors, the staff and the children from the Children's Hospital of Florence, on the occasion of the 600th anniversary of the establishment of that Italian Institution which is dedicated to welcoming and defending children.  Furthermore, the Institute's mission, adapting to the new needs of children and families, remains a reference point in the field of protection and promotion of the rights of children and adolescents at national and international levels. 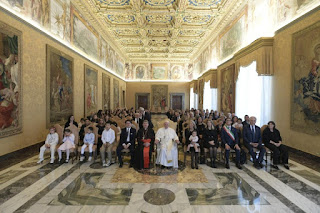 Unscripted remarks offered by the Holy Father, Pope Francis
to members of the Children's Hospital of Florence

I prepared a speech for you, but it would be a bit boring if I were to read it ... I prefer to speak two words and then to greet you one by one.

You (the President of the Institute) used an expression that is very touching: the culture of children.  Today, we need to use this expression.  The culture of children.  It is a culture of surprise, of seeing growth, seeing how they are surprised by life, how they come into contact with life. And we must learn to do the same. This way, this road that we all have traveled as children, we must walk it again. You quoted the Gospel of Mark: Let the children come ...; but there are also other passages of the Gospel in which Jesus goes even further: he not only says he welcomes children, and he who welcomes them welcomes him, but he goes further: If you do not become like children, you will not enter the Kingdom of heaven. And this is what the child's culture must teach us. We must somehow go back to a child's simplicity and above all the ability to surprise us. The surprises! Our God is the God of surprises, and we must learn this.

Thank you for what you said and for sharing your history ...

And I still have to say another thing, which I would like to take from you: those broken medals ... (half to the child and half to the mother who left him at the Institute). Today in the world there are many children who ideally have half the medal. They are alone. Victims of war, victims of migration, unaccompanied children, victims of hunger. Children with half a medal. And who has the other half? The Mother Church. We have the other half. We need to reflect and make people understand that we are responsible for this other half and we have to help make another home for the innocents, more global, with the attitude of adoption. So many times there are people who want to adopt children, but there is so much bureaucracy - when there is no corruption in the middle, you pay and ... But help me in this: to sow awareness that we have the other half of that child's medal. Many, many families who do not have children and would certainly have the desire to have one through adoption: moving forward, creating a culture of adoption because there are so many abandoned children, lonely children, victims of war and so on; may people learn to look at that half and say, I have another one too. I ask you to work on this. And thank you! 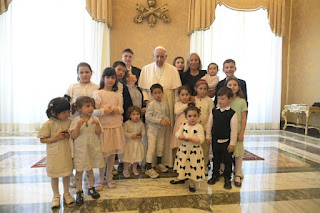 Prepared remarks of the Holy Father, Pope Francis
offered in written form to all who were present

I welcome all of you, the leaders and staff of the Istituto degli Innocenti, and I welcome you, boys and girls, who are the protagonists of this institution that has been welcoming, assisting and promoting children for six hundred years. When I came to Florence, in 2015, for the V National Ecclesial Convention, speaking of the beauty of the city, I could not help remembering that much of that beauty was placed there at the service of charity, and I mentioned the Hospital of the Innocents as an example. I recalled that one of the first Renaissance architectures was created for the service of abandoned children and desperate mothers (Speech at the Ecclesial Convention of Florence, 10 November 2015).

The Institute of the Innocents, with its six centuries of history - a story that is not over, but that looks to the future - speaks to us of a city that has put the best of itself into welcoming children, so that they should no longer be called abandoned but welcomed, entrusted to the love and care of the community. The history of the Innocents is a story that has much to teach us. Meanwhile, we see at your origin the generosity of a rich banker, Francesco Datini, who donated the amount with which it was possible to start the realization of this work. Even today, the social and ethical responsibility of the world of finance is an indispensable value for building a more just and united society. The other striking element of this story is that the design was entrusted to Filippo Brunelleschi, the most important architect of the time, who at that time was working on a masterpiece that still today astonishes the world: the dome of the Cathedral of Santa Maria del Fiore because the same beauty dedicated to the house of the Lord is also dedicated to the home of less fortunate children. Because for the children who needed to be received, it was not enough for the nurses to to give them milk, there was the desire to make them grow in an environment that was as beautiful as possible.

And for six hundred years, the Istituto degli Innocenti has been concerned to offer its boys and girls everything they need to grow in a dignified manner. This is a truth that today must be said with strength: to the poor, to fragile creatures, to those who live on the peripheries, we must offer the best we have. And among the most fragile people we have to care for, there are certainly many rejected children, robbed of their childhood and their future; minors facing desperate journeys to escape hunger or war. There are children who do not see the light because their mothers suffer economic, social, cultural conditioning that pushes them to give up that wonderful gift that is the birth of a child. How much we need a culture that recognizes the value of life, especially the weak, those who are threatened and offended, and instead of thinking of being able to put them aside, to exclude them with walls and closures, we need to be concerned with offering care and beauty! A culture that recognizes in every face, even the smallest, the face of Jesus: Whoever welcomes one child like this in my name, welcomes me (Mt 18: 5).

The Istituto degli Innocenti is a place of history, but also of stories: smaller stories, but equally fascinating. These are the stories of the hundreds of thousands of children who have passed between those walls. Still speaking at the Florence Conference, I also referred to a particular aspect: the fact that mothers, separated from their newborns, often left medals broken in half, with which they hoped, by presenting the other half, to be able to recognize their children in better times. Here - I said -, we must imagine that our poor have a broken medal. We have the other half. Because the Mother Church in Italy has half of everyone's medal and recognizes all its abandoned, oppressed, fatigued children.

Today the goal we must set ourselves, at various levels of responsibility, is that no mother finds herself in a position where she must leave her child. But we must also ensure that in the face of any event, even tragic ones that may detach a child or a girl from her parents, there are structures and paths of welcome in which childhood is always protected and cared for, in the only way that is worthy : giving children the best we can offer them. Remembering the words of Jesus who invites us all to become like you, as children, in order to be able to enter the Kingdom of Heaven.

This is what the Istituto degli Innocenti teaches us with its centuries-old history, with the thousands of stories it has hosted, and with the stories that today you too, boys and girls, tell with your smiling and joyful faces. And for this reason I want to thank the managers, the operators and all those who contribute to carrying out the various activities of the Istituto degli Innocenti. I thank you and I invite you to continue your service with competence and tenderness, professionalism and dedication. I pray for this and I bless you. And I ask you to please pray for me.
Original texts in Italian
at 08:50