Upon his arrival at the airport in Skopje, at 8:05am local time (2:05am EDT), the Holy Father, Pope Francis was welcomed by the President of North Macedonia, Mister Gjorge Ivanov.  Then, two children dressed in traditional attire symbolically offered His Holiness a gift of bread, salt and water.  After military honours had been presented, the President of the Republic of North Macedonia and the Prime Minister, Mister Zoran Zaev accompanied the Pope as he travelled by car to the Presidential Palace. 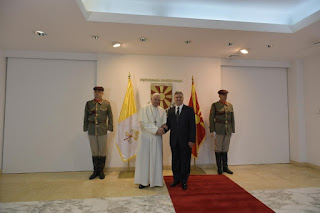 Upon his arrival at the Presidential Palace in Skopje, at 9:00am local time (3:00am EDT), the Holy Father, Pope Francis was welcomed by the President of the Republic of North Macedonia, Mister Gjorge Ivanov. 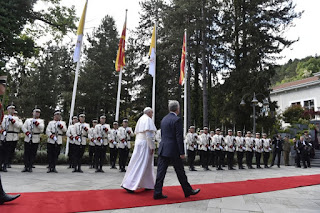 Following the presentation of military honours and the introduction of the members of the respective delegations, the President accompanied the Pope to the interior of the Palace where they posed for an official photograph.  Then, they went together to the second floor and entered into a room where they met privately. 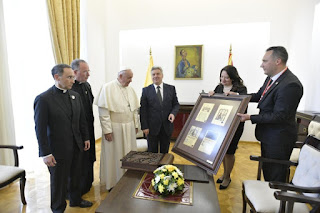 Having concluded their meeting, after the introductions of the President's family members and the exchange of gifts, the Holy Father went to another room located nearby for a private meeting with the Prime Minister, Mister Zoran Zaev.  Having met the members of the Prime Minister's family after their meeting was concluded, the President then accompanied Pope Francis to the first floor of the Palace where His Holiness met with local Authorities. 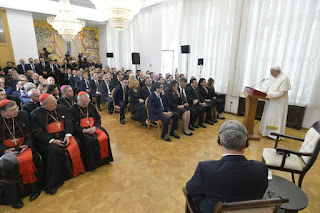 Greetings of His Holiness, Pope Francis
offered to local Authorities in Skopje

I am very grateful to the President for his kind words of welcome and for the gracious invitation to visit North Macedonia that he, together with the Prime Minister, extended to me.

I also thank the representatives of the other religious communities present among us. I offer a warm greeting to the Catholic community, represented here by the Bishop of Skopje and Eparch of the Eparchy of Blessed Virgin Mary of the Assumption in Strumica-Skopje, which is an active and integral part of your society, sharing fully in the joys, concerns and daily life of your people.

This is the first time that the Successor of the Apostle Peter has come to the Republic of North Macedonia. I am happy to do so on the twenty-fifth anniversary of the establishment of diplomatic relations with the Holy See, which occurred a few years after the country became independent in September 1991.

Your land, a bridge between East and West and a meeting-point for numerous cultural currents, embodies many of the distinctive marks of this region. With the elegant testimonies of its Byzantine and Ottoman past, its lofty mountain fortresses and the splendid iconostases of its ancient churches, which speak of a Christian presence dating back to apostolic times, North Macedonia reflects all the depth and richness of its millennial culture. But allow me to say that these great cultural treasures are themselves only a reflection of your more precious patrimony: the multiethnic and multi-religious countenance of your people, the legacy of a rich and, indeed, complex history of relationships forged over the course of centuries.

This crucible of cultures and ethnic and religious identities has resulted in a peaceful and enduring coexistence in which those individual identities have found expression and developed without rejecting, dominating or discriminating against others. They have shown a greater disposition for tolerance; they have been able to demonstrate respect. They have thus given rise to a fabric of relationships and interactions that can serve as an example and a point of reference for a serene and fraternal communal life marked by diversity and reciprocal respect.

These particular features are also highly significant for increased integration with the nations of Europe. It is my hope that this integration will develop in a way that is beneficial for the entire region of the Western Balkans, with unfailing respect for diversity and for fundamental rights.

Here, in fact, the different religious identities of Orthodox, Catholics, other Christians, Muslims and Jews, and the ethnic differences between Macedonians, Albanians, Serbs, Croats, and persons of other backgrounds, have created a mosaic in which every piece is essential for the uniqueness and beauty of the whole. That beauty will become all the more evident to the extent that you succeed in passing it on and planting it in the hearts of the coming generation.

Every effort made to enable the diverse religious expressions and the different ethnic groups to find a common ground of understanding and respect for the dignity of every human person, and consequently the guarantee of fundamental freedoms, will surely prove fruitful. Indeed, those efforts will serve as the necessary seedbed for a future of peace and prosperity.

I would also like to acknowledge the generous efforts made by your Republic – both by the State authorities themselves and with the valued contribution of various international Agencies, the Red Cross, Caritas and several non-governmental organizations – to welcome and provide assistance to the great number of migrants and refugees coming from different Middle Eastern countries. Fleeing from war or from conditions of dire poverty often caused precisely by grave outbreaks of violence, in the years 2015 and 2016, they crossed your borders, headed for the most part towards northern and western Europe. With you, they found a secure haven. The ready solidarity offered to those in such great need – people who had left behind so many of their dear ones, to say nothing of their homes, their work and their homeland – does you honour. It says something about the soul of this people that, having itself experienced great privations, you recognize in solidarity and in the sharing of goods the route to all authentic development. It is my hope that you will cherish the chain of solidarity that emerged from that emergency, and thus support all volunteer efforts to meet the many different forms of hardship and need.

I wish likewise to pay homage in a very special way to one of your illustrious fellow-citizens, who, moved by the love of God, made love of neighbour the supreme law of her life. She won the admiration of the whole world and pioneered a specific and radical way of devoting one’s life to the service of the abandoned, the discarded, and the poorest of the poor. I am naturally referring to the woman universally known as Mother Teresa of Calcutta. Born in 1910 in a suburb of Skopje with the name of Anjezë Gonxha Bojaxhiu, she carried out her apostolate of humble and complete self-giving in India and, through her Sisters, reached out to the most varied geographical and existential peripheries. I am pleased that I will shortly be able to pause in prayer at the Memorial dedicated to her, built on the site of the Church of the Sacred Heart, where she was baptized.

You are rightly proud of this great woman. I urge you to continue to work in a spirit of commitment, dedication and hope, so that the sons and daughters of this land, following her example, can recognize, attain and fully develop the vocation that God has envisaged for them.

From the time that North Macedonia gained its independence, the Holy See has closely followed the steps that this country has taken to advance dialogue and understanding between the civil authorities and religious confessions.

Today, God’s providence offers me the chance to demonstrate personally this closeness and to express gratitude as well for the yearly visit made to the Vatican by an official Delegation of yours on the feast of Saints Cyril and Methodius. I encourage you to persevere with confidence along the path you have taken, in order to make your country a beacon of peace, acceptance and fruitful integration between cultures, religions and peoples. Drawing from their respective identities and the vitality of their cultural and civil life, they will thus be able to build a common destiny in openness to the enrichment that each has to offer.