Bulgaria: Meeting the Metropolitan and the Holy Synod

At noon local time (5:00am EDT), the Holy Father, Pope Francis arrived at the Synod Palace for his visit with His Holiness, Neofit, Metropolitan of Sofia and Patriarch of all Bulgaria, and with members of the Holy Synod. 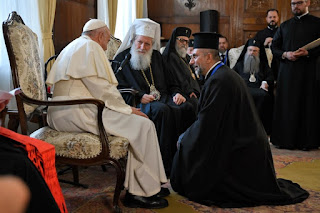 Upon his arrival, the Pope was welcomed at the main entrance to the Synod Palace by the Metropolitan of Western and Central Europe, Antonij (Mihalev) who accompanied him to the room on the first floor where Patriarch Neofit was waiting.  Only the members of the Holy Synod, Simeone II, former King of Bulgaria and the Ecclsiastical members of the Papal Party took part in this encounter. 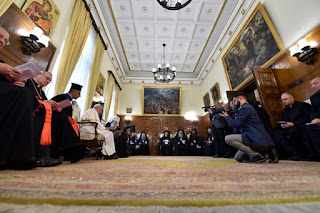 Greetings of the Holy Father, Pope Francis
offered to the Patriarch and the Holy Synod

In the joy of the Risen Saviour, I offer you Easter greetings on this Sunday known in the Christian East as Saint Thomas Sunday. Let us consider the Apostle, who puts his hand in the Lord’s side, touches his wounds and proclaims, My Lord and my God! (Jn 20:28). The wounds opened in the course of history between us Christians remain painful bruises on the Body of Christ which is the Church. Even today, their effects are tangible; we can touch them with our hands. Yet, perhaps together we can touch those wounds, confess that Jesus is risen, and proclaim him our Lord and our God. Perhaps together we can recognize our failings and immerse ourselves in his wounds of love. And in this way, we can discover the joy of forgiveness and enjoy a foretaste of the day when, with God’s help, we can celebrate the Paschal mystery at one altar.

On this journey, we are sustained by great numbers of our brothers and sisters, to whom I would especially like to render homage: the witnesses of Easter. How many Christians in this country endured suffering for the name of Jesus, particularly during the persecution of the last century! The ecumenism of blood! They spread a pleasing perfume over this Land of Roses. They passed through the thicket of trials in order to spread the fragrance of the Gospel. They blossomed in fertile and well-cultivated ground, as part of a people rich in faith and genuine humanity that gave them strong, deep roots. I think in particular of the monastic tradition that from generation to generation has nurtured the faith of the people. I believe that these witnesses of Easter, brothers and sisters of different confessions united in heaven by divine charity, now look to us as seeds planted in the earth and meant to bear fruit. While so many other brothers and sisters of ours throughout the world continue to suffer for their faith, they ask us not to remain closed, but to open ourselves, for only in this way can those seeds bear fruit.

Your Holiness, this meeting, which I have greatly desired, follows that of Saint John Paul II with Patriarch Maxim during the first visit of the Bishop of Rome to Bulgaria. It also follows in the footsteps of Saint John XXIII, who, in the years he lived here, became greatly attached to this people, so simple and good (Giornale dell’anima, Bologna, 1987, 325), valuing their honesty, their hard work and their dignity amid trials. Here, as a guest welcomed with affection, I experience a deep fraternal nostalgia, that healthy longing for unity among children of the same Father that was felt with growing intensity by Pope John during his time in this city. During the Second Vatican Council, which he convened, the Bulgarian Orthodox Church sent observers, and from that time on, our contacts have multiplied. I think of the visits that, for fifty years now, Bulgarian delegations have made to the Vatican and which I annually have the joy of receiving; so too, the presence in Rome of an Orthodox Bulgarian community that prays in one of the churches of my Diocese. I appreciate the gracious welcome given to my envoys, whose presence has increased in recent years, and the cooperation shown with the local Catholic community, especially in the area of culture. I am confident that, with the help of God, and in his good time, these contacts will have a positive effect on many other dimensions of our dialogue. In the meantime, we are called to journey and act together in order to bear witness to the Lord, particularly by serving the poorest and most neglected of our brothers and sisters, in whom he is present. The ecumenism of the poor.

Our guides on this journey are, above all, Saints Cyril and Methodius, who have linked us since the first millennium and whose living memory in our Churches continues to be a source of inspiration, for despite adversities they made their highest priority the proclamation of the Lord, the call to mission. As Saint Cyril put it: With joy I set out for the Christian faith; however weary and physically weak, I will go with joy (Vita Constantini, VI, 7; XIV, 9). And despite premonitions of the painful divisions which would take place in centuries to come, they chose the prospect of communion. Mission and communion: two words that distinguished the life of these two saints and that can illumine our own journey towards growth in fraternity. The ecumenism of mission.

Cyril and Methodius, Byzantines by culture, were daring enough to translate the Bible into a language accessible to the Slavic peoples, so that the divine Word could precede human words. Their courageous apostolate remains today a model of evangelization and a challenge to proclaim the Gospel to the next generation. How important it is, while respecting our own traditions and distinctive identities, to help one another to find ways of passing on the faith in language and forms that allow young people to experience the joy of a God who loves them and calls them! Otherwise, they will be tempted to put their trust in the deceitful siren songs of a consumerist society.

Communion and mission, closeness and proclamation. Saints Cyril and Methodius also have much to say to us about the future of European society. Indeed, they were in a certain sense the promoters of a united Europe and of a profound peace among all the continent’s inhabitants, showing the basis for a new art of living together, with respect for differences, which in no way are an obstacle to unity (Saint John Paul II, Greeting to the Official Bulgarian Delegation, 24 May 1999: Insegnamenti XXII, 1 [1999], 1080). We too, as heirs of the faith of the saints, are called to be builders of communion and peacemakers in the name of Jesus. Bulgaria is a spiritual crossroads, a land of contacts and mutual understanding (Saint John Paul II, Address at the Arrival Ceremony, Sofia, 23 May 2002: Insegnamenti, XXV, 1 [2002], 864). Here various confessions, from the Armenian to the Evangelical, and different religious traditions, from the Jewish to the Muslim, have found a welcome. The Catholic Church has met with acceptance and respect both in her Latin tradition and in her Byzantine-Slavic tradition. I am grateful to Your Holiness and the Holy Synod for this benevolent reception. In our relationships, too, Saints Cyril and Methodius remind us that, far from being an obstacle to the Church’s unity, the diversity of customs and observances only adds to her beauty and that between East and West various theological formulations are often to be considered complementary rather than conflicting (Unitatis Redintegratio, 16-17). We can learn so much from one another (Evangelii Gaudium, 246)!

Your Holiness, shortly I will be able to visit the Patriarchal Cathedral of Saint Aleksander Nevskij and to pray there in memory of Saints Cyril and Methodius. Saint Aleksander Nevskij, from the Russian tradition, and the Holy Brothers, from the Greek tradition and apostles of the Slavic peoples, show us the extent to which Bulgaria is a bridge-country. Your Holiness, dear Brothers, I assure you of my prayers for you, for the faithful of this beloved people, for the lofty location of this nation, and for our journey in an ecumenism of blood, of the poor and of mission. In turn, I ask a place in your prayers, in the certainty that prayer is the door that opens to every path of goodness. I thank you once again for the welcome I have received and I assure you that I will cherish the memory of this fraternal encounter.