The Holy Father has sent a telegram of condolence for the death of His Eminence, Cardinal Nasrallah Pierre Sfeir, Patriarch emeritus of Antioch for Maronites, which occurred on Sunday, 12 May. 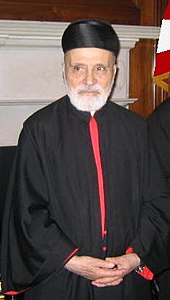 Telegram of His Holiness, Pope Francis

Having learned with sadness of the death, in his 99th year, of His Beatitude, Cardinal Nasrallah Pierre Sfeir, Patriarch emeritus of Antioch for Maronites, I send my sincere condolences to you and to his family as well as to all the faithful of the Patriarchal Church of Antioch for Maronites which he governed for many years with such gentleness and determination.

A free and courageous man, Cardinal Sfeir exercised his mission in a troubled context, and was a decisive craftsman of gathering, peace and reconciliation. An ardent defender of the sovereignty and independence of his country, he will remain a great figure in the history of Lebanon. I ask the Father of all mercy to welcome into his home of peace and light this wise and committed pastor who has shown the love of God to the people entrusted to him.

As a pledge of comfort, I send to you, Your Beatitude, my Apostolic Blessing, and I extend it as well to the family of the deceased Cardinal and to all who were close to him, to all those who accompanied him in his later years and to those who will take part in the celebration of his funeral.

Francis
Original text in French
at 15:08