Upon his arrival at the International Airport in Sofia, the Holy Father, Pope Francis was welcomed by the Prime Minister of the Bulgarian Republic, Mister Boyko Borisoy.  Then, four children dressed in traditional attire presented flowers to the Pope before the Prime Minister accompanied the Holy Father to the VIP lounge inside the airport for a brief private meeting. 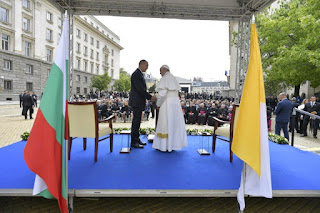 At the conclusion of that meeting, the Pope travelled by car to the Presidential Palace for the official ceremony welcoming him to Bulgaria.

Arriving at the Presidential Palace at 10:40am local time (3:40am EDT), the Holy Father, Pope Francis was welcomed by the President of the Republic of Bulgaria, Mister Rumen Radev, in the square located beside the main entrance to the Palace.

After the presentation of military honours, the playing of the national anthems and the introduction of the respective delegations, the Pope and the President climbed to the second floor and, having inspected the Honour Guard, they entered the Green Room where they held a private meeting.

At the conclusion of their discussion, after the introduction of the President's family members and the exchange of gifts, the President accompanied the Holy Father to the main entrance of the Presidential Palace where the Pope met with local Authorities.

At 11:15am local time (4:15am EDT), in the Atanas Burov Square, the Holy Father, Pope Francis met with local Authorities, representatives of civil society and members of the Diplomatic Corps.

Following the speech given by the President of the Republic of Bulgaria, Mister Rumen Radev, Pope Francis shared his speech.

At the conclusion of that meeting, the Holy Father travelled by car to the Mayor's Palace. 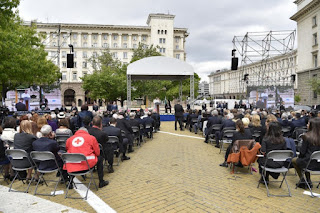 Speech of the Holy Father, Pope Francis
addressed to local authorities,
representatives of civil society and
members of the Diplomatic Corps

I am happy to be here in Bulgaria, a place of encounter between many cultures and civilizations, a bridge between Eastern and Southern Europe, an open door to the Near East, and a land of ancient Christian roots that nourish its vocation to foster encounter both in the region and in the international community. Here diversity, combined with respect for distinctive identities, is viewed as an opportunity, a source of enrichment, and not as a source of conflict.

I cordially greet the Authorities of the Republic, and I thank them for the invitation to visit Bulgaria. I thank His Excellency the President for his gracious words of welcome here in this historic Square named after the statesman Atanas Burov, who suffered under a regime that could not tolerate freedom of thought.

I send my respectful greetings to His Holiness, Patriarch Neofit, with whom I will shortly meet, to the Metropolitans and Bishops of the Holy Synod, and to all the faithful of the Bulgarian Orthodox Church. My affectionate greetings go to the Bishops, priests, men and women religious, and all the members of the Catholic Church, whom I have come to confirm in faith and to encourage along their daily path of Christian life and witness.

I also cordially greet the Christians of other Ecclesial Communities, the members of the Jewish community and the followers of Islam. With you, I reaffirm the firm conviction that authentic teachings of religions invite us to remain rooted in the values of peace; to defend the values of mutual understanding, human fraternity, and harmonious coexistence (Document on Human Fraternity, Abu Dhabi, 4 February 2019). Let us profit from the hospitality of the Bulgarian people so that every religion, called to foster harmony and concord, can contribute to the growth of a culture and an environment of complete respect for the human person and his or her dignity, by establishing vital links between different civilizations, sensibilities and traditions, and by rejecting every form of violence and coercion. In this way, those who seek by any means to manipulate and exploit religion will be defeated.

My visit today recalls that of Saint John Paul II in May 2002, and evokes the happy memory of the nearly decade-long presence in Sofia of the then Apostolic Delegate, Archbishop Angelo Giuseppe Roncalli. The latter never ceased to feel deep gratitude and esteem for your nation, to the point that he once said that wherever he would go, his house would always be open to everyone, Catholic or Orthodox alike, who came as a brother or sister from Bulgaria (cf Homily, 25 December 1934). Saint John XXIII worked tirelessly to promote fraternal cooperation between all Christians. With the Second Vatican Council, which he convoked and over whose first phase he presided, he gave great encouragement and decisive support to the development of ecumenical relationships.

It is in the wake of these providential events that from 1968 on – a full fifty years ago – an official Delegation composed of the highest civil and ecclesiastical Authorities of Bulgaria has made a yearly visit to the Vatican on the occasion of the feast of Saints Cyril and Methodius. These two Saints evangelized the Slavic peoples and were at the origin of the development of their language, their culture, and above all their abundant and enduring fruits of Christian witness and of holiness.

Blessed be Saints Cyril and Methodius, co-patrons of Europe! By their prayers, their genius and their joint apostolic efforts, they serve as an example for us and they continue to be, more than a millennium later, an inspiration for fruitful dialogue, harmony and fraternal encounter between Churches, States and peoples! May their radiant example raise up many followers in our own day and open up new paths of peace and concord!

Now, at this particular moment of history, thirty years after the end of the totalitarian regime that imprisoned its liberty and initiatives, Bulgaria faces the effects of the emigration in recent decades of over two million of her citizens in search of new opportunities for employment. At the same time, Bulgaria – like so many other countries of Europe – must deal with what can only be called a new winter: the demographic winter that has descended like a curtain of ice on a large part of Europe, the consequence of a diminished confidence in the future. The fall in the birth rate, combined with the intense flow of emigration, has led to the depopulation and abandonment of many villages and cities. In addition, Bulgaria confronts the phenomenon of those seeking to cross its borders in order to flee wars, conflicts or dire poverty, in the attempt to reach the wealthiest areas of Europe, there to find new opportunities in life or simply a safe refuge.

I am aware of the efforts that the nation’s leaders have made for years to ensure that young people, in particular, not be constrained to emigrate. I would encourage you to persevere on this path, to strive to create conditions that lead young people to invest their youthful energies and plan their future, as individuals and families, knowing that in their homeland they can have the possibility of leading a dignified life. To all Bulgarians, who are familiar with the drama of emigration, I respectfully suggest that you not close your eyes, your hearts or your hands - in accordance with your best tradition – to those who knock at your door.

Your country has always distinguished itself as a bridge between East and West, capable of favouring encounter between the different cultures, ethnic groups, civilizations and religions that for centuries have lived here in peace. The development of Bulgaria, including her economic and civil development, necessarily entails a recognition and enhancement of this specific trait. May this land, bordered by the great Danube River and by the shores of the Black Sea, rendered fruitful by the humble labour of so many generations, open to cultural and commercial exchanges, integrated in the European Union, and with solid links to Russia and Turkey, offer all her sons and daughters a future of hope.

May God bless Bulgaria, keep her in peace and ever hospitable, and grant her prosperity and happiness!
Original text in Italian
Texte en français