Briefing from the Synod, day 10

Halfway through the working sessions at the Synod on the Amazon, today's press conference included information provided by the Brazilian bishops Wellington Tadeu de Queiroz Vieira from Cristalândia, and Pedro José Conti from Macapá as well as the Italian bishop Ambrogio Spreafico from Frosinone-Veroli-Ferentino and the Peruvian indigenous woman, Yesica Patiachi Tayori, a bilingual teacher and pastoral worker from the Harakbut people who is representing the Vicariate of Puerto Maldonado.  They were accompanied by Paolo Ruffini and Father Giacomo Costa. 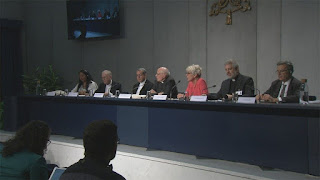 The Synod of Bishops for the Amazon, having reached its halfway point, took a qualitative leap on Tuesday evening, Father Giacomo Costa, Secretary of the Commission for Information explained to journalists, thanks to the free interventions of some synod fathers, who asked not to fragment the journey of the Assembly in the search for small solutions for individual issues but rather - as Paolo Ruffini, Prefect of the Dicastery for Communication explained - to resume a prophetic impulse , leaving space for the Holy Spirit, so as not to lose the general look. A new more spiritual dynamic, which has already demonstrated its effects by freeing the word in the work of the twelve small working groups which will meet until Thursday afternoon. On Thursday evening, the speakers will present the 12 reports which will be made public on the afternoon of Friday 18 October. The last week of work will be dedicated to discussing the draft of the final document, which will be voted on in the Synod Hall on Saturday afternoon, October 26. 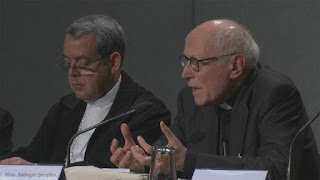 The Brazilian bishop, His Excellency, Wellington Tadeu de Queiroz Vieira, pastor of the Diocese of Cristalândia, is part of this dynamic, emphasizing that the problem of the lack of priests is concrete not only for the Amazon, but also for Europe, which sees a reduction in the number of ordained ministers. There are no obstacles, in the Bible and in theology, to the ordination of viri probati, married adult men, de Queiroz clarifies, but, and many in the Synod Hall think like me, I do not see in celibacy the main obstacle to having more priests. The real problem is inconsistency, infidelity, and scandals caused by ordained ministers. We must ensure that a fertile land is developed in the hearts of people, especially the young - adds the Brazilian bishop - If we presbyters and we bishops don't acquire 'the smell of the sheep', as Pope Francis asks us, we cannot transmit the fragrance of Christ because otherwise, we are only announcers of ourselves, who thus remove people from Jesus.

The first path to take is the conversion of ordained ministers, because, again explains Monsignor de Queiroz, the principal instrument for reawakening the vocation in the young is the sanctity of the present evangelizers: the sanctity of simplicity of life, openness to dialogue, the proclamation of Christian truth, and compassion with those who suffer. A second problem is also the bad distribution of priests in the territory. In Latin America - the bishop of Cristalândia complains - there are areas with a good presence of priests, but with little missionary spirit. Many of them could go to border areas like the Amazon. 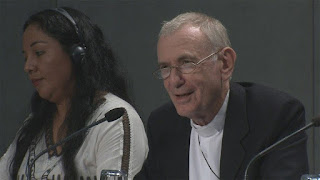 After him, the next to speak was His Excellency, Pedro José Conti, Bishop of Macapá, a diocese of 148 thousand square kilometres (just under half of Italy), which occupies almost the entire state of Amapà, in the north of Brazil, at the mouth of the Rio delle Amazons. He says that at the Synod he asked for the role of the laity to be enhanced. In my diocese, which is like all of northern Italy - explained Bishop Conti - in some parishes we have 100 communities and only one priest. Those who carry out the work are the laity. Priests must prepare them, follow them and guide them, but they are the ones who build the Church. The laity have the experience of having a family, they have the professional competence. We priests and bishops, we think we know everything but it is not true, we need the skills of the laity, and this is also an antidote to clericalism. The Bishop of Macapà adds that the service of lay people involved in politics, who are trained to give substance to the social doctrine of the Church, is fundamental.

Finally, it will be the small-scale producers, according to Bishop Conti, who will save the Amazon. The model to follow is that of small agricultural cooperatives, "which coexist with the Forest, the 'Standing Forest', and which draw resources from it in a sustainable way in order to commercialize natural products, exploiting its great wealth with the ancestral wisdom transmitted by the indigenous peoples. I was excited - he says - to hear their testimonies. I live 600 km from the indigenous villages, in a city with half a million inhabitants and I am struggling every day with all the urban problems, and I feel the urgency of an ecological conversion. 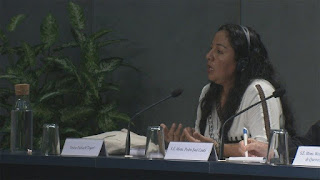 Testimony was often painful, such as that of the Peruvian indigenous Yesica Patiachi Tayori, a bilingual teacher of the Harakbut people and a member of the indigenous pastoral care team from the apostolic vicariate of Puerto Maldonado, which the Vatican Press Office denounces that the multinationals operating in the Amazon want to disappear. Where is the UN? Where are the other international organizations? - she asks - in the face of abuse, murder, trafficking in persons, mistreatment of women: where can we report these crimes?  We indigenous peoples are and will be the guardians of the forest - guarantees the indigenous teacher - but the common home is everyone's responsibility. We are afraid, because we are forgetting our language, we are suffocated by models of development that come from outside and do not respect life. We are discriminated against, considered as objects to be displayed and not as a living culture. We asked the Pope - concludes Yesica - to help us be represented at national and international institutions, so that they do not let us become extinct as a people and abandon us to live in self-extermination. We are the ones who live the crimes against the common home: no journalist has focused on our protest. We have no forum to report these crimes. We want our cause to make inroads into the human conscience.

Responding to a question about the role of women, Bishop de Queiroz Vieira points out that the Church in the Amazon is inconceivable without women and their presence should be valued more and more. Concerning the female diaconate - he adds - there is already a special commission at work, established by the Pope. The Synod has no decision-making power: we can make proposals, but it will be up to the Holy Father to give the guidelines. "Not only in the Amazon, but also in Italy the presence of women is important in the Church, Bishop Ambrogio Spreafico, bishop of Frosinone-Veroli-Ferentino clarifies. He points out that in his diocese" 80% of the lay people who lead the annual Bible study groups are women, and they are excellent. At the beginning of the year we give them a mandate. There are many ways - the Italian bishop concluded - to ensure that women can express their value and their presence can be valued, even before bishops, even without the diaconate.
at 14:32