@ the Synod: the Working Document is presented

In the presence of the Holy Father, the 14th General Congregation of the Special Synod of Bishops for the Pan-amazonian Region took place today in the New Synod Hall at the Vatican. 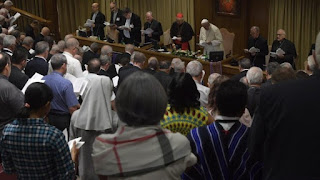 In the Synod Hall this morning, the General Relator, Cardinal Claudio Hummes, Archbishop Emeritus of Sao Paulo and President of the Pan-Amazonian Ecclesial Network (Repam) presented the draft of the final document of the Special Assembly for the Pan-Amazon region. The text, which gathers the fruits of the interventions presented during the deliberations, will now be passed on to the twelve discussion groups for the elaboration of the collective ways.

On Wednesday and Thursday of this week, amendments will be included in the final document by the General Rapporteur and the Special Secretaries, with the help of the Experts who are in attendance. Then, the text will be reviewed by the Commission for the editorial staff and then read aloud in the Synod Hall on Friday afternoon, during the 15th General Congregation. Finally, on Saturday afternoon, the 16th General Congregation will vote on the final document.

At the opening of today's Congregation, as usual, the prayer of Terce was held. The homily was given by His Excellency, Miguel Cabrejos Vidarte, Archbishop of Trujillo and President of CELAM, who urged those in attendance to look to the example of Saint Francis and the Canticle of the Creatures. For Francis - highlighted the prelate - beauty is not a question of aesthetics, but of love, of fraternity at all costs, of grace at all costs. The Saint of Assisi - he continued - "embraced all creatures with a love and devotion never seen before, speaking to them of the Lord and exhorting them to praise Him. In this sense, Francis became the inventor of a medieval sentiment for nature.

Knowing, recognizing and giving back - said the president of CELAM - are the verbs that mark the 'rhythm' of the spiritual journey of the Poverello of Assisi, to know the Highest Good, to recognize its benefits and to return praise to It. If in fact, for Saint Francis, sin is an appropriation not only of the will, but also of the goods that the Lord works in the human being, praise, on the contrary, means restitution. The human being - confirmed Bishop Cabejos Vidarte - cannot praise God as he should, since sin has wounded his sonship with the Lord.

So the creatures, as St. Francis states in the Song, will do the work of mediation to bring praise to God. In fact, they fill the void of the human being, lacking, because of sin, a voice worthy to praise the Creator. Saint Francis discovers in God the place of Creation - the prelate concluded - and returns Creation to God, because he sees in him not only the Father of all, but also the Father of all things.

The work of this morning's session was closed by a special guest who focused on the topic of integral ecology, in particular in relation to climate change.
at 21:04