Greetings for those attending an exhibition

This afternoon, the Holy Father, Pope Francis went to the Pontifical Lateran University where, in the atrium of the University, he opened the exhibition entitled Calligraphy for Dialogue: promoting the culture of peace through culture and art by the artist Othman Alkhuzaiem.  The exhibition has been named in memory of Cardinal Jean-Louis Tauran, former President of the Pontifical Council for Inter-religious Dialogue.

Then, following the official opening ceremony, in the Benedict XVI Hall, the Pope met with those who are participating in a study day based on the theme: Education, human rights, peace.  Instruments of international action and the role of religions.  The study day is taking place in preparation for a later event entitled To rebuild the global education initiative, which will take place on 14 May 2020. 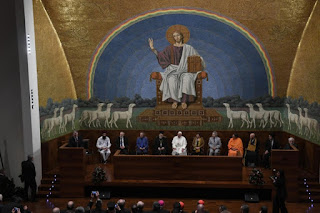 Greetings of the Holy Father, Pope Francis
addressed to the participants attending the exhibition

Illustrious representatives of the Churches, of Communities and Religions,
Ladies and Gentlemen who are serving as Ambassadors,
Dear Professors,
Dear Students,

I am pleased to be here among you at the conclusion of this Study Day which was organized by the Lateran University concerning education about peace, in preparation for the Global Education Pact event which will take place on 14 May next year.

Educating for peace requires giving relief and response to those - many, unfortunately - that conflicts and wars condemn to death or force to abandon their loved ones, their homes and their countries of origin. We need to take care of the expectations and anxieties of so many of our brothers and sisters. We cannot remain indifferent, limiting ourselves to praying for peace. Everyone: educators and students, are called to build and protect peace every day, turning our prayer to God to give peace to us as a gift.

Responsibility towards the new generations requires above all a commitment to form them and listen to them in order to respond to the challenges of our times, without denying the immutable value of truth, but with an understandable and current language. It is not enough to be critical of the past or of the present; rather, it is necessary to show creativity and proposals for the future, helping each person to grow to become a protagonist and not just a spectator.

Peace, human dignity, inclusion and participation show how necessary it is to have a broad educational pact in order to be able to transmit not only the knowledge of technical contents, but also and above all a human and spiritual wisdom, made of justice, righteousness, virtuous behaviour and at the same time, capable of realizing itself in practice. How many times are the youngest excluded because the proposed objectives are not really viable, or are they only meant to satisfy limited interests? Instead of conditioning the future journey of the young generations, we should rather pass on to them a method capable of enhancing the experience, even negative ones - and what is more negative than war and violence? We need a method capable of looking at the facts and their causes, capable of providing the tools to overcome conflicts.

For those who are called to teach by the light of their religion or their beliefs, this commitment also becomes a way of bearing witness and helping others to find an alternative model to the material and merely horizontal dimension. Many times we too, women and men of faith, limit ourselves to giving indications rather than transmitting the experience of values ​​and virtues. And so, in the face of conflicts and the need to build peace, we do not realize that our message is likely to be abstract and thus remain unheeded, theoretical. Even a habitat that defines itself as religious, but actually is ideological, generates feelings of violence and a desire for revenge in some people. Faced with the lack of peace, it is not enough to invoke freedom from war, to proclaim rights or even to use authority in its various forms. Above all, it is necessary to question oneself, to recover the ability to be among people, to dialogue with them and to understand their needs, perhaps with our weakness, which is then the most authentic way to be welcomed when we speak of peace.

Not only believers, but all those who are motivated by good will know how necessary dialogue is in all its forms. Dialogue not only serves to prevent and resolve conflicts, but it is a way to bring out the values and virtues that God has written in the heart of every man and has made evident in the order of creation. Searching and exploring every opportunity for dialogue is not just a way to live or coexist, but rather an educational criterion. Dialogue is an educational criterion. In this line, the course of studies in inter-confessional theology which started in this University finds its rightful place. Continue this path with courage. How much we need men of faith who educate in true dialogue, using every possibility and opportunity!

Your current efforts will end with the opening of an exhibition that presents works whose language seeks to be dialogical. The paintings of the Saudi artist Al-Khuzaiem are proposed as tools to open paths of peace, to recall rights, and to make the person the centre of every action and every educational project.

This moment becomes even more significant because it reminds us of the work of a man of dialogue and a peacemaker, Cardinal Jean-Louis Tauran. His life was all projected in the perspective of dialogue. First of all, dialogue with God, which the Christian, the priest and bishop Tauran cultivated, to whom he inspired the choices and actions and in which he found comfort during his illness. The second is the dialogue between peoples, governments and international institutions for which the diplomat Tauran did his utmost by favouring the conclusion of agreements, mediations or proposing solutions - including technical ones - to conflicts that threatened peace, limited the rights of man and obscured freedom of conscience. Third, dialogue between religions, which saw the Cardinal spend himself not to reaffirm the points already in common, but to search for and build new ones. As President of the Pontifical Council for Inter-religious Dialogue, he made us understand that it is not enough to stop at what brings us closer, but it is necessary to explore new possibilities so that different religious traditions can transmit peace as a message, as well as a message of peace.

There is an episode in his service to the Holy See and to the Church that helps us understand the anxieties and aspirations, but also the simplicity and depth of this man of God. In June 1993 in Vienna, during the United Nations Conference on human rights, the then Archbishop Tauran had just finished his speech, recalling the necessary dialogue between religions. On leaving the grandstand, a member of the Saudi Arabian delegation met him by chance, asking how to deepen the importance of dialogue. His response was: We can do it when I come to your country. That desire accompanied him over the years and he found fulfillment only a few months before his return to the Father's house with his visit to Riyadh in April 2018.

His willingness to dialogue supported, even in his illness, this figure of a priest, loyal and helpful, a friend, who also for me was important and of great help to understand many situations in my service as Bishop of Rome and successor of Peter.

My gratitude is extended to all those who have contributed to this initiative. To all of you, I address an invitation to pray without ceasing and to make every effort so that through an authentic Global Educational Pact we can inaugurate an era of peace for the entire human family. Thank you.
Testo originale nella lingua italiana