This morning, the Congregation for Divine Worship and the Discipline of the Sacraments, one of the Dicasteries (Offices) in the Roman Curia, has published a Decree establishing a new celebration of the Blessed Virgin Mary of Loretto which will be part of the liturgical calendar from now on. 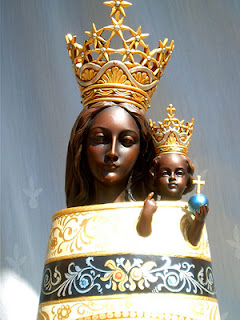 Since the Middle Ages veneration for the Holy House of Loreto has been the origin of that particular shrine which still today is visited by many faithful pilgrims in order to nourish their faith in the Word of God made flesh for us.

This shrine recalls the mystery of the Incarnation, leading all those who visit it to consider the fullness of time, when God sent his Son, born of a woman, as well as to meditate both on the words of the Angel announcing the Good News and on the words of the Virgin in response to the divine call. Overshadowed by the Spirit, the humble handmaid of the Lord so became the dwelling-place of divinity, the purist image of the holy Church.

Closely bound to the Apostolic See this shrine, praised by Popes and known throughout the world, has, over the years and no less than Nazareth in the Holy Land, been able to illustrate powerfully the evangelical virtues of the Holy Family.

In the Holy House, before the image of the Mother of the Redeemer and of the Church, Saints and Blesseds have responded to their vocation, the sick have invoked consolation in suffering, the people of God have begun to praise and plead with Mary using the Litany of Loreto, which is known throughout the world. In a particular way all those who travel via aircraft have found in her their heavenly patron.

In light of this, Pope Francis has decreed, by his own authority, that the optional memorial of the Blessed Virgin Mary of Loreto should be inscribed in the Roman Calendar on 10 December, the day on which the feast falls in Loreto, and celebrated every year. This celebration will help all people, especially families, youth and religious to imitate the virtues of that perfect disciple of the Gospel, the Virgin Mother, who, in conceiving the Head of the Church also accepted us as her own.

Therefore the new memorial must appear in all Calendars and Liturgical Books for the celebration of Mass and the Liturgy of the Hours; the relative texts are attached to this decree and their translations, approved by the Episcopal Conferences, will be published after confirmation by this Dicastery.

Anything to the contrary nothwithstanding.

From the Congregation for Divine Worship and the Discipline of the Sacraments, 7 October 2019, the memorial of the Blessed Virgin Mary of the Rosary.