@ the Synod today: women in the Church

The fundamental presence of women in the Church was one of the strong themes of today's briefing on the Synod for the Amazon. Today, Sister Roselei Bertoldo; Father Zenildo Lima da Silva; Monsignor Gilberto Alfredo Vizcarra Mori, Apostolic Vicar of Jaén in Perú or San Francisco Javier in Peru; His Excellency, Ricardo Ernesto Centellas Guzmán, Bishop of Potosí in Bolivia; and Cardinal Oswald Gracias, Archbishop of Bombay. 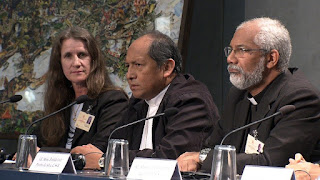 On Saturday, the vote on the final document at the Synod for the Amazon will take place.  The Synod is now in its last week of work. At the beginning of today's Press Conference, the Prefect of the Dicastery for Communication, Paolo Ruffini, spoke about this, taking stock of the synodal assembly at the briefing in the Press Room. Yesterday and the day before, the working groups drew up proposals; it is up to the General Speaker and the Special Secretaries to integrate the findings of the working groups, together with the help of the experts who are in attendance. The drafting committee is reviewing the text which will then be presented in the Synod Hall. The text will then be entrusted to the Pope for his final discernment, explained Father Giacomo Costa, Secretary of the Information Commission. Mister Ruffini also noted the reference to synodality and the action of the Holy Spirit which was highlighted this morning by the Pope at the General Audience.

Among the speakers to take the microphone today, first was a woman, Sister Roselei Bertoldo, from the Sisters of the Immaculate Heart of Mary and the Network A cry for Life. A life, her life, has been spent in efforts to eradicate trafficking, especially of women and children, in Brazil. One of the major problems is that of domestic servitude, when girls are taken away by indigenous communities to study outside their communities and end up instead being sexually exploited and working in slavery. With passion and love, Sister Bertoldo denounced how the bodies of these women and girls become commodities and how difficult it is to denounce. For this reason, the Network in which you are working first conducts a campaign to help recognize the abuse, then to train people by making them able to report traffickers. The Synod for the Amazon is also drawing attention to this drama and, underlines the religious dimension, the commitment to evangelization, and also includes safeguarding life. Responding to a question, she also emphasizes the importance of women's participation in decision making.

The presence of women in the Church is the majority, but in places of decision they are a minority, almost invisible.  In his speech, His Excellency, Ricardo Ernesto Centellas Guzmán, Bishop of Potosí and President of the Bishops' Conference of Bolivia, called for greater involvement of women in the decision-making processes in the Church, beginning with the parishes. In particular, he spoke of the experience of a pastoral vicar in his diocese who has a different approach than men: she asked for suggestions, allowing participation walking together but also deciding together.

If the governing authority in the Church is masculine, the pastoral activity is markedly feminine, stresses the priest Don Zenildo Lima da Silva, Rector of the São José Seminary in Manaus and Vice President of the Organization of Seminaries and Institutes of Brazil. The focus of his intervention is the formation of priests and his exhortation is to rethink the process starting from synodality; this is necessary to train priests who are able to work in the reality of Amazonia and to dialogue with these cultures. The importance of putting oneself in a process of listening and dialogue is highlighted. 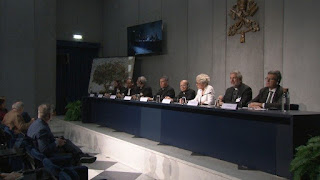 The world of the Andes, Chad, the forest of Peru are many places visited by the Apostolic Vicar of Jaén en Perú or San Francisco Javier, Monsignor Gilberto Alfredo Vizcarra Mori, a Jesuit. His words reveal the desire to get closer to other cultures and his experience is one of enrichment. He prepared for this Synod by going to live in the Peruvian jungle with these communities. He emphasizes how these peoples feel that they are part of the biome and not the masters of the beauty of creation and therefore urges us to regain our lives in harmony with nature, learning from them.

A great learning experience. This is how Cardinal Oswald Gracias, Archbishop of Bombay summarizes his experience at the Synod. In addition to the great violence against nature, the cardinal says he is struck by the injustices against the indigenous people of Amazonia, expelled from their homes, linking this discourse to that of the castes in India and the tribes driven from their lands, even if by us he explains, is less systematic. But what strikes him above all is the passion with which the Amazonian bishops try to help these peoples: The world has much to learn from the bishops of South America, he says. With regard to women, he argues that "canon law and theology itself make it possible to do more for women in the Church and regarding inculturation, it stresses the importance of having training methods inculturated in seminaries and claims not to see any difficulty to have a liturgical rite with elements of the Amazonian culture. Finally, he too focuses on synodality, emphasizing the importance of walking together.
at 16:06