This morning in Rome, the Holy Father, Pope Francis has accepted the resignation from pastoral governance of the Diocese of Saint John, New Brunswick offered by His Excellency, Robert Harris.

The Holy Father has appointed His Excellency, Christian Riesbeck, CC, currently the Titular Bishop of Numidia and Auxiliary Bishop of the Archdiocese of Ottawa, as the new Bishop of Saint John. 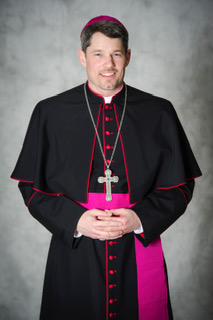 His Excellency, Christian Riesbeck, CC was born in Montreal (Quebec) on 7 February 1970.  he completed primary studies in Aylmer (Gatineau, Quebec) and in Nepean (Ottawa, Ontario).  He then attended secondary school at Saint Pius X in Ottawa, and then the University of Ottawa where he earned a Bachelor of Political Science degree.  He subsequently studied at Saint Augustine's Seminary in Toronto, and later earned a Licence in Canon Law at St. Paul University in Ottawa.

Ordained a priest on 12 October 1996 for the Archdiocese of Ottawa, he was incardinated (2003) in the Society of Apostolic Life known as the Companions of the Cross.

After three years of experience as pastoral vicar, he was named Pastor for seven years at the parish of the Queen of Peace in Houston (Texas, USA).  In 2010, he was appointed Chancellor of the Archdiocese of Ottawa.  He also held the Office of Judge of the Regional Tribunal.

On 7 January 2014, he was appointed Auxiliary Bishop of Ottawa and received episcopal consecration on 19 March 2014.

He speaks French, English and Spanish.
at 15:43