General Audience: a response to a plea

This morning's General Audience began at 9:00am in Saint Peter's Square where the Holy Father, Pope Francis met with groups of pilgrims and the faithful from Italy and from every corner of the world.

In his speech, the Pope continued the cycle of catechesis on the Acts of the Apostles, adding his meditation on the theme: Come to Macedonia and help us! (Acts 16:9).  The Christian faith arrives in Europe (Acts 16:9-10). 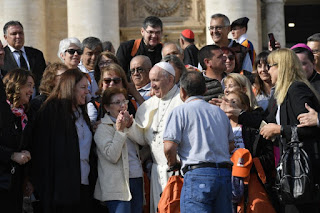 After having summarized his catechesis in various languages, the Holy Father offered particular greetings to each group of the faithful in attendance.  Then, he called for special attention to the situation in Iraq, expressing his condolences for victims of the protests which have taken place in that country. 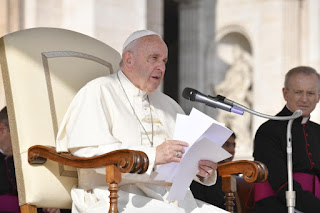 Reading the Acts of the Apostles, we see how the Holy Spirit is the protagonist of the Church's mission: it is he who guides the path of evangelizers showing them the way they are to follow.

We see this clearly when the apostle Paul, having reached Troas, receives a vision. A Macedonian begs him: Come to Macedonia and help us (Acts 16: 9). The people of Northern Macedonia are proud of this, they are so proud to have called Paul, for it was Paul who announced Jesus Christ. I remember so much that beautiful people who welcomed me with such warmth: may they keep this faith that Paul preached to them! The Apostle did not hesitate; he left for Macedonia, certain that it was God himself who sent him, and he arrived at Philippi, a Roman colony (Acts 16:12) on the Egnatia way, to preach the Gospel. Paul stopped there for several days. There were three events that characterized his stay in Philippi, during these three days: three important events. 1) Evangelization and the baptism of Lidia and her family; 2) the arrest he suffered, together with Silas, after having exorcised a slave woman exploited by her masters; 3) the conversion and baptism of his jailer and his family. We see these three episodes in Paul's life.

The power of the Gospel is addressed, first of all, to the women of Philippi, in particular to Lydia, a merchant of purple cloth, from the city of Thyatira, a believer in God to whom the Lord opened her heart to adhere to the words of Paul (Acts 16:14). In fact, Lidia welcomed Christ, received baptism together with her family and welcomed those who were of Christ, hosting Paul and Silas in her home. Here we have the testimony of the arrival of Christianity in Europe: the beginning of a process of inculturation that continues even today. He entered from Macedonia.

After the warmth experienced at Lidia's home, Paul and Silas then found themselves dealing with the harshness of the prison: they passed from the consolation of this conversion of Lidia and her family, to the desolation of the prison, where they were thrown for having freed a slave who had a spirit of divination and brought much gain to her masters with the trade of guess ... in the name of Jesus (Acts 16:16) with what seemed to be magic. His masters earned so much and this poor slave did what fortune-tellers usually do: she guesses the future, she reads your palms - as the song says, take this palm, gypsy, and people paid for this. Even today, dear brothers and sisters, there are people who pay for this. I remember in my diocese, in a very large park, there were more than 60 tables where there were soothsayers who would read your palm and people believed these things! And they paid for it. And this also happened at the time of Saint Paul. His masters, in retaliation, denounced Paul and lead the Apostles to magistrates on charges of public disorder.

What's going on? Paul was in prison and during his imprisonment, a surprising event occurred. He was in desolation, but instead of complaining, Paul and Silas sang a hymn of praise to God and this praise released a power that freed them: during the prayer an earthquake shook the foundations of the prison, the doors were opened and their shackles were opened (cf Acts 16:25-26). Like the prayer of Pentecost, even what was done in prison caused prodigious effects.

The jailer, believing that the prisoners had fled, was about to commit suicide, because jailers paid with their own lives if a prisoner escaped; but Paul shouted to him: We are all here! (Acts 16:27-28). Then he asked: What must I do to be saved? (Acts 16:30). The answer was: Believe in the Lord Jesus and you and your family will be saved (Acts 16:31). At this point the change took place: in the middle of the night, the jailer listened to the word of the Lord with his family, welcomed the apostles, washed their wounds - because they had been beaten - and together with their relatives, received baptism; then, full of joy with all his people for having believed in God (Acts 16:34), the jailer prepared the table and invited Paul and Silas to stay with them: the moment of consolation! In the middle of the night, in the heart of this anonymous jailer, the light of Christ shone and defeated darkness: the chains of the heart fell and a joy never felt in him and in his family appeared. Thus the Holy Spirit is doing the mission: from the beginning, from Pentecost onwards the Spirit is the protagonist of the mission. And this carries us forward, we need to be faithful to the vocation that the Spirit moves us to do. To proclaim the Gospel.

The Holy Father's catechesis was then summarized in various languages and His Holiness offered greetings to each group of the faithful in attendance.  To English-speaking guests, he said:

I greet the English-speaking pilgrims and visitors taking part in today’s Audience, especially the groups from England, Ireland, Denmark, Australia, Korea, Indonesia, Israel, the Philippines, Canada and the United States of America. Upon all of you, and your families, I invoke the joy and peace of our Lord Jesus Christ. God bless you!

At the conclusion of the General Audience, the Holy Father issued the following appeal:

Dear brothers and sisters, my thoughts go out to beloved Iraq, where protests have taken place during the past few months, causing many deaths and others to be wounded.  While I express condolences for the victims and my closeness to their families and to those who have been wounded, I invite the Authorities to listen to the cries of the people who are asking to live with dignity and tranquility.  I exhort all Iraqi people, with the support of the international community, to continue their efforts toward dialogue and reconciliation and to seek just solutions to the challenges and the problems in that country.  I pray that those suffering people may find peace and stability after having endured so many years of fighting and violence, during which they have suffered so much.
Testo originale nella lingua italiana
at 08:58