@ the Synod today: the indigenous population and permanent deacons

At the beginning of the final week of work at the Synod for the Amazon, today's Press Conference, held at the Holy See Press Center included information presented by Cardinal Schönborn, Archbishop of Vienna; His Excellency, Domenico Pompili, Bishop of Rieti (Italy); Father Dario Bossi, Provincial of the Comboni Missionaries in Brazil and Marcivana Rodrigues Paiva, a representative of the Sateré Mawé people from Brazil. 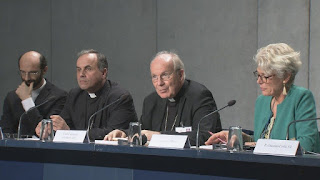 With this Synod, Pope Francis wants to reawaken the conscience of the whole Church as to the fate of the indigenous peoples of Amazonia, who have been living under the threat of extinction for 500 years. Missionaries have served these populations, but the situation remains dramatic. At the briefing of the Synod for the Amazon in the Vatican Press Office, Christoph Schönborn, the 74 year-old Archbishop of Vienna admits that he has never been in the Region, but as a Synod father I learned so much about the courage of indigenous peoples. As heirs of colonial power, we must be very careful and aware of what it means for these peoples to be at risk of extinction. The Pope asks us to pay attention to those who have no voice, to forgotten peoples and the poor.

The former student of the theologian Joseph Ratzinger, later Pope Benedict XVI, and collaborator of Saint John Paul II, reminded journalists that he spoke in the Synod Hall about the experience of the diocese he has led for 21 years. In Vienna we have 180 permanent deacons, the vast majority are married. This is an experience born thanks to the intuition of my predecessor Cardinal König, who put into practice one of the innovations introduced by the Second Vatican Council. Today our permanent deacons serve in parishes, in communities, in Caritas and even in prisons. The permanent diaconate can really help pastoral care in the Amazon.

Another help to the Church in the Amazon, according to Cardinal Schönborn, can come from a more equitable distribution of the clergy. Colombia is its example it has 1200 priests in the United States, Canada and Spain. If at least some could move to the Amazon, they would be of great help. Europe, compared to other continents, adds the President of the Austrian bishops has an overabundance of priests, also because, we must admit, the salary is better than in poor areas. In short, for the Cardinal, all of Latin America, indeed the whole Catholic Church is jointly responsible for the Amazon. If there is a need for help, the Church must make efforts to send missionaries, as it has done in the past. And he must also reflect on his own experience: Do we have the confidence to seek, to really rely on the vocations of the natives? asks Cardinal Schönborn. 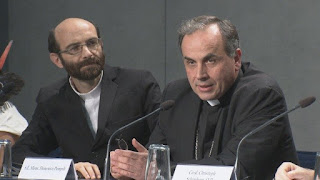 The Amazon is decisive for the climate of the world - the cardinal concludes, touching on the theme of integral ecology - and we must ask ourselves what our contribution is to increasing the dangers for the Amazon. For example, using mobile phones made with minerals extracted from the Amazon forest. The bishop of Rieti, His Excellency, Domenico Pompili, echoes this concern: The question of ecology is now the main concern. 'Laudato sì' has shown that there is no development in the medium to long term, if this is not sustainable. Neither the deniers, who deny the evidence of the problem, and the terrorists who see the end of the world nearing, are needed, but no one can now avoid reflecting seriously, as we are doing at the Synod. To help the Synod fathers in this reflection, the Prefect of the Dicastery for Communications, Paolo Ruffini, the German climatologist Hans J. Schellnhuber, Director emeritus of the Potsdam Institute for Climate Impact Research, reported today. The tragedy of the 2016 earthquake in Central Italy - according to the testimony of Bishop Pompili - is the light of a difficult and unresolved problem in the relationship between man and the environment. And today the reconstruction, indeed the 'regeneration' that is being carried out must be done following strict eco-sustainable criteria. Unfortunately there are still tens of thousands of displaced persons.

The Italian Father Dario Bossi, Provincial Superior of the Comboni Missionaries in Brazil, a member of the Repam and the Iglesias y Minería network, who has lived in the Amazon for 15 years says: It would be a very strong sign if the Church were able to eliminate the use of gold in its liturgies and sacraments. The Comboni missionary denounces, for the equivalent of a gold ring, the gold diggers move tons of earth and pollute the rivers with mercury and cyanide. Only 10% of gold - explains Father Bossi - is used for processes that are actually useful, such as use in medicine, the rest is stored or used for jewelry. In our territory of Piquia de Baixo, there is the largest open pit iron mine in the world, with an export process of 900 kilometers, which crosses more than 100 communities. The fruit of this predatory extractive model, he clarifies, are deforestation and pollution, not to mention the tragedies due to the breaking of mining dams, like in Mariana in 2015 and this year in Brumadinho.

The association between government and large companies is very dangerous - the provincial of the Comboni Missionaries declares - the laws are modified and controls are reduced. The Church is near to the affected communities, along with the ecumenical network Iglesias y Minería, and an ad hoc commission of the Brazilian episcopate. No one can stand this system any more - commented Father Bossi - Mining is a common evil in the Amazon, and in 25 percent of the Amazon territory new points have already been identified which are suitable for extraction. Fortunately, the indigenous communities react: for 10 years the community of Piquia de Baixo - says the missionary - is organizing itself to demand full reparation of the damage suffered, and now they are managing to build a new neighbourhood far from the polluted areas. 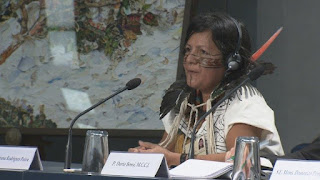 For the natives who arrive in the city, the greatest danger is invisibility: when you are invisible, you have no rights. This was explained by Marcivana Rodrigues Paiva, a representative of the Sateré Mawé ethnic group in Brazil, who spoke about the issue of urbanization, an ever-increasing phenomenon for indigenous peoples, who migrate to large urban centres from their native lands. Only in Manaus, for example, there are 45 indigenous races, 35 thousand inhabitants in all, who speak 16 different languages. Without territory, we have no right to our identity, Marcivana denounced, launching an appeal to support the indigenous peoples who arrive in the city through an indigenous pastoral care addressed to them.

The Prefect of the Holy See's Dicastery for Communications, Paolo Ruffini, informed the Press that the general rapporteur of the Synod, Cardinal Claudio Hummes, Archbishop emeritus of Sao Paulo and President of the Pan-Amazonian Ecclesial Network (Repam), presented the final draft document this morning in the Synod Hall to delegates of the Special Assembly. It covers four main themes: The journey of the people of Amazonia, the integral conversion to fullness and life, pastoral, synodal and missionary conversion, and finally cultural and ecological conversion, therefore the question of inculturation. But, concludes Ruffini, the cardinal made it clear that the listening process has not ended. 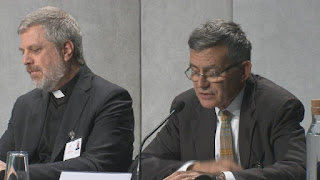 Finally, Ruffini intervened, urged by a journalist to comment on the gesture made this morning by unknown people who have taken from the church of Santa Maria in Traspontina the wooden statuettes depicting pregnant native women used during the ceremony at the Vatican last 4 October in the presence of Pope Francis and thrown them in the river. The gesture was taken up by reporters who published it on social networks. We have already repeated several times here - explained Ruffini - that those statues represented life, fertility, mother earth. It is a gesture, it seems to me, that contradicts the spirit of dialogue that should always animate everyone. It's another thing to say except that it was a theft, and that perhaps it also speaks for itself .
at 19:56