General Audience: the mission of Paul and Barnabas

This morning's General Audience began at 9:00am local time (3:00am EDT) in Saint Peter's Square where the Holy Father, Pope Francis met with groups of pilgrims and the faithful from Italy and from every corner of the world.

In his speech, the Pope continued his cycle of catechesis on the Acts of the Apostles, adding his meditation on the theme: God has opened the door of faith to the pagans (Acts 14:27).  The mission of Paul and Barnabas and the Council of Jerusalem (cf Acts 15:7-11).

After having summarized his catechesis in various languages, the Holy Father offered particular greetings to each group of the faithful in attendance.  Then, he called for prayer for the situation in Chile. 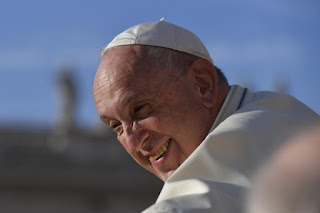 Paul and Barnabas first arrived in Antioch (Syria), where they stayed for a whole year in order to teach and to help the community take root (cf Acts 11:26). They proclaimed the word to the Jewish community, to the Jews. Thus, Antioch became the centre of missionary propulsion, thanks to the preaching with which the two evangelizers - Paul and Barnabas - affected the hearts of believers, who for the first time in Antioch were referred to as Christians (cf Acts 11:26) .

The nature of the Church, which is not a stronghold, but a tent capable of widening its space and providing access to all peoples, emerges from the Book of the Acts of the Apostles (cf Is 54: 2). The Church must be outgoing or else it is not Church, or it must always be on the way, always widening its space so that everyone can enter, or else it is not Church. A Church with open doors (Evangelii gaudium, 46), always with the doors open. When I see some churches here, in this city, or when I saw it in the other diocese where I come from, with the doors closed, this is a bad signal. The churches must always have the doors open because this is the symbol of what a church is: always open. The Church is called to always be the open house of the Father ... Thus, if someone wants to follow a motion of the Spirit and approaches the doors seeking God, he will not meet with the coldness of a closed door (EG, 47).

But this novelty of the doors open poses a question: to whom? To the pagans, because the Apostles preached to the Jews, but the pagans also came to knock on the door of the Church; and this newness of the doors open to the pagans triggered a very lively controversy. Some Jews claimed the need to become Jews through circumcision in order to save themselves, and then received baptism. They said: Unless you get circumcised according to the custom of Moses, you cannot be saved (Acts 15: 1), that is, you cannot receive baptism later. First the Jewish rite and then baptism: this was their position. And to settle the matter, Paul and Barnabas consulted the council of the Apostles and elders in Jerusalem, and what was considered the first council in the history of the Church took place, the council or assembly of Jerusalem, to which Paul refers in the Letter to the Galatians (Gal 2:1-10).

A very delicate theological, spiritual and disciplinary issue was addressed: that is, the relationship between faith in Christ and the observance of the Law of Moses. Decisive during the assembly were the speeches of Peter and James; they are columns of the mother Church (cf Acts 15: 7-21; Gal 2: 9).

They invited believers not to impose circumcision on the pagans, but only to ask them to reject idolatry and all its expressions. From that discussion came the common path, and this decision was ratified with the so-called apostolic letter sent to Antioch.

The assembly of Jerusalem offers us an important light on the ways in which to deal with differences and to seek the truth in love (Eph 4:15). It reminds us that the ecclesial method for conflict resolution is based on a dialogue made up of attentive and patient listening and the discernment that is carried out in the light of the Spirit. It is the Spirit, in fact, that helps us to overcome closures and tensions and works in hearts so that, in truth and in goodness, we may reach unity. This text helps us to understand synodality. It is interesting how the Letter explains: the Apostles began, saying: The Holy Spirit and we think that ... The presence of the Holy Spirit is proper to synodality, otherwise it is not synodality, it is a parlour, parliament, something else ...

We ask the Lord to strengthen the desire and responsibility of communion in all Christians, especially bishops and priests. May the Lord help us to live dialogue, listening and encounter with our brothers and sisters in the faith and with those who are distant, to taste and to manifest the fruitfulness of the Church which is called to be a joyful mother of many children at all times (cf Psalm 113:9).

The Holy Father's catechesis was then summarized in various languages and His Holiness offered greetings to each group of the faithful in attendance.  To English-speaking pilgrims, he said:

I greet the English-speaking pilgrims and visitors taking part in today’s Audience, especially the groups from England, Hungary, Malta, the Netherlands, Norway, Indonesia, Israel, Malaysia, the Philippines, and the United States of America. Upon all of you, and your families, I invoke the joy and peace of our Lord Jesus Christ. May God bless you!
Testo originale nella lingua italiana 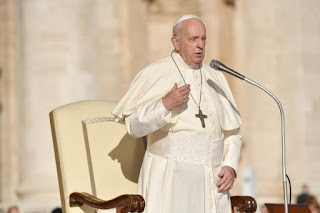 At the conclusion of the General Audience, the Holy Father invited all those in attendance to join him in prayer:

I am preoccupied as I follow the events that are taking place in Chile.  I hope that, by putting an end to the violent demonstrations and through dialogue, efforts will be made to find solutions to the crisis and to face the difficulties that have generated it, for the good of the entire population.
at 08:11