A strong appeal to personal responsibility for the care of our common home was the focus of today's briefing at the Synod for the Amazon. Cardinal Fridolin Ambongo Besungu, Archbishop of Kinshasa; Archbishop Karel Martinus Choennie, Bishop of Paramaribo, Suriname; Monsignor Héctor Miguel Cabrejos Vidarte, Archbishop of Trujillo and president of CELAM; and Judite da Rocha contributed to this morning's press conference. 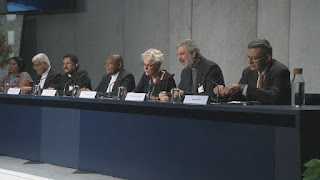 The suffering of the Amazonian people and the risks to the planet were the focus of today's briefing in the Vatican Press Room. Today is "the last day of the small sharing groups that are working on the first draft of the final document: a job that requires comparison and proposing solutions, explains Father Giacomo Costa, Secretary of the Vatican Dicastery for Information. All this will then be entrusted to the persons in charge of drafting the document, the general rapporteur and the special secretaries. With the help of experts and the Commission for drafting the document the next phase will come to pass. These people, Father Costa remembers, will start working tomorrow to offer the final version of the document which will then be voted on.

The spotlight on the impact of the arrival of hydroelectric power plants in the Amazon region was focused by Judite da Rocha, National Coordinator of the Movement of Victims of Dams, from Brazil. First of all, she asked reporters not to think that these plants produce clean energy because they should think about the damage to the local populations, to the rivers, to nature. First the hydroelectric power station always comes, then mining and then other industries. But in particular the focus of her words was on the consequences for indigenous peoples: traditional communities are dispersed, we do not exist, we are not compensated after these interventions, she says. And again, there are mental illnesses, depressions, suicides. Sometimes we recognize the rights of indigenous peoples, sometimes not, even if it is the same company. For women, there is talk of a double violence: their work is not considered, just think of those who are housewives or those who are looking for plants to make medicines ... not to mention the problems of sexual harassment. But cities also suffer from the impact of the construction of these dams: there are regions that have beaches on the rivers and all this is eliminated when a hydroelectric plant is built. Then the problem of where to live takes over, because we are talking about populations that have always lived along the banks of the rivers. 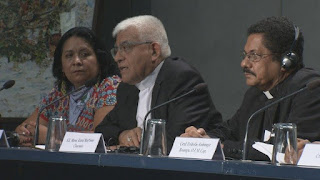 Nature, the human being and the role of the Church were the three key words of the speech delivered by Archbishop Héctor Miguel Cabrejos Vidarte, Archbishop of Trujillo, President of the Peruvian Bishops' Conference and President of the Latin American Episcopal Council, CELAM. In his speech he referred to Saint Francis' love for nature, which has also taken up by Pope Francis in Laudato si ', a love that urges reflection on the dignity of man. We must not talk - he remembers - of these subjects as if they were only concerned with the Amazon, this is a call to a universal brotherhood. Answering a question, he expresses the intention that a specific ecclesial body be created to put into practice the decisions made at the Synod in order to address the themes of the Amazon region. He also recalled the work being done to restructure CELAM and finally he also dwelled on the environmental emergency and climate change, emphasizing the delay of the international community in applying the Paris Agreement. The focus was on COP25 which will be held in December in Chile, where it will be important to insist on commitment to our common home.

Very focused on the problem of climate change was the intervention of Monsignor Karel Martinus Choennie, Bishop of Paramaribo, Suriname, where natives and descendants of slaves live together; it is one of the greenest countries: including 92% is the original forest. If deforestation, in the Amazon, should increase even by 5%, it will have a disastrous and irreversible effect, he says, invoking changes in lifestyles, such as meat consumption and seeking an economy of solidarity because, he says, riches arrive in the West, leave our country and do not make it better. We therefore need creativity on a political level to find solutions. 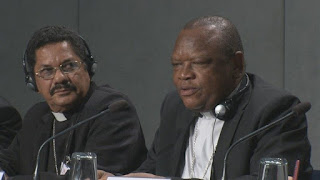 Amazonia looks very much like the Congo basin, remarked Cardinal Fridolin Ambongo Besungu, Archbishop of Kinshasa, speaking at the briefing, representing a portion of Africa that shares so many similarities with the Amazon regions. The Cardinal calls everyone to question: we all have a responsibility for our common home and no one can say 'I have nothing to do with it,' he says, recalling that inaction means collaborating with danger. But the rulers of Western countries are also responsible for China, he says, referring to the large mining companies. The Church does its best but has problems due to a lack of people, the cardinal continues, opening horizons of hope and urging people to dare anyway. In the Congo, he says, an inculturation of the Gospel was made and the Eucharist is lived as 'an authentic feast'.
at 15:45