Greetings for the National Soccer team

At 9:00am yesterday morning (3:00am EDT), the Holy Father, Pope Francis received in audience the members of the Italian National Soccer team along with the leadership of the Italian Football (Soccer) Federation on the occasion of the creation of a special bond between the Soccer club and the Gesù Bambino Hospital, as well as the 150th anniversary of the establishment of that venerable institution.  Also present at the encounter was the President of the Gesù Bambino Paediatric Hospital, Doctor Mariella Enoch. 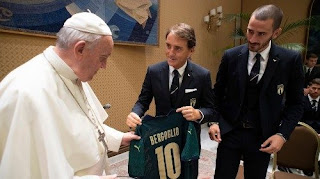 Greetings of the Holy Father, Pope Francis
addressed to members of the
National Italian Football Club

Thank you for your visit!  I like to see your courage after a match: to come here so soon ... We can see that here, there is something mystical (the spirit).  Thank you.  Really, thank you.

You spent some time with the children (from the Gesù Bambino Hospital) - I know - and there, you experienced the tenderness that we all have within us, but many times it is hidden, hidden within.  But when we are faced with a child, there is always a tenderness that comes out, right?

When I went in, I saw, to the left, a painting, a fantasy about the creation of the world.  When you are going out, have a look.  It is God's hands that are giving birth to a child.  The artist thought that every birth is a creation.  Birth is always a creation, even those times when the creation is not perfect and there are the sufferings of children, as you were able to witness during your visit, and you also know the ABC which is sometimes experienced by families as a cross.  But those are tender hands.  In language that can be understood by a child and so that we can be close to a child, we use tenderness, always.  The only thing that a child understands and that we begin to understand when we stand before a child is the language of tenderness.  I know that you spent some time there with them.  Thank you for this gesture of tenderness.  Thank you.

And then, the soccer ball (which was presented to the children).  You gave them a beautiful thing.  Even Don Bosco would say this: How can we make the children happy, how can we gather the children? - at that time, in poor, abandoned neighbourhoods -: it was enough to throw a ball on the street and the children would immediately arrive. The soccer ball has an attraction. I remember that there was a small square a few meters from my house. We played there, but we didn't always have a ball available, because at that time the ball was leather, it was very expensive. There was still no plastic, there were still no rubber balls ... There was a ball made of rags. Even with a ball made of rags, miracles happen. And the children of Mozambique, when I was there they brought me a ball made of rags. They play like this. It is important to have a ball there, whatever it is, because they throw themselves behind it.

There is an Argentinian film that has this title - The ball of rags - Pelota de trapo, is the Spanish title - that helps us to see the mysticism (the spirit) of what you (the President of the FIGC) have done, even with a ball made of rags.  It is a film that was probably made in the 40s, it is well made, very beautiful, poetic.

I will leave you with these two artistic works: the one I described (the painting), the tenderness of God in the creation of every person, of a child; and The ball of rags, the film.  Perhaps you will want to see it.  And thank you, thank you very much for this gesture, this gesture of grown men who are capable of tenderness, of being close to children.  Perhaps one or more of you cried after your encounters.  Maybe.  Tenderness always betrays us!  One person makes a gesture of tenderness and then cries in secret, because that's the way it is!  Life is like that.  Thank you, sincerely.  These are gestures that do good, they are gestures that bring healing, healing.  Thank you.

And now, I want to meet you one at a time.