Saturday at the Synod

The Special Synod for the Pan-Amazon Region is continuing.  This morning, in the presence of the Holy Father, the seventh General Congregation is taking place in the Synod Hall, involving 175 Synod Fathers. 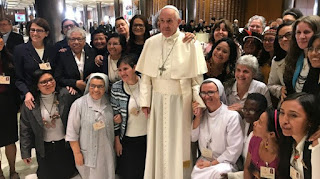 On the day when the Church remembers Our Lady of Aparecida, the Synod Hall drew a song in honour of the Virgin, Patroness of Brazil and entrusted her with the work of the Assembly. The 7th General Congregation of the Panamanian Synod opened in this way. Thus, space was given to the interventions of various Synod Fathers and of some auditors. Among the topics under consideration was that of integral education, an instrument of integration and promotion for the Amazonian peoples: for sustainable development, it is emphasized that equal access to information is needed through inter-disciplinarity and trans-disciplinarity, distant from the culture of waste and close to the culture of encounter. The task of educators must therefore be renewed through the perspective of evangelization so that it is up to this great challenge that is education. Hence the reflection on the urgency of an educational pact, in an ecological perspective and in an Amazonian key, so as to promote living well and acting well.

The Amazon is a region rich in diversity, not only biological, but also cultural: today, the communities that live there are threatened by the expansion of the so-called civilized world which, in reality, aims only to exploit natural resources to capitalize on wealth. On the contrary, what is needed is an integral education that re-establishes the connection between man and the environment, forming individuals capable of caring for the common home, in the name of solidarity, community consciousness and ecological citizenship. It is still said that integral ecology must become part of the way of living in the Church for the world. The theme of the encyclical Laudato si’ should be taken seriously, it is reiterated, because while man aims at forced homogenization, God wants a harmony of differences. And this is precisely what the Amazon is: a virtuous model, as it represents unity in the diversity of its ecological systems and of the peoples who inhabit it. Hence the call not to homogenize, exclude, or dominate peoples and Creation, so that injustice and violence do not prevail, examples of which include land grabbing and drilling in protected marine areas.

Furthermore, in an intervention, the subject of the interaction between ecology and work is dealt with, two areas too often united by technocratic or exploitation dynamics. On the contrary, it is recalled that it is necessary to promote a theology of Creation, so as to reconstruct a non-predatory relationship with nature. The theme of work is also developed in another intervention that addresses the issue of youth unemployment: it is the first and most serious form of exclusion and marginalization of youth, it is stated, with alarming situations of slavery in the fields or in cities; tragic also is the drama of child labor. Hence the reflection on the need to promote workers' rights, re-launching the solidarity economy, local bio-economies and renewable energy, all while looking at the priority of the common good on earnings. Another issue addressed was that of trafficking in human beings in all its dramatic facets, including prostitution, forced labor, organ trafficking. It deals with crimes against humanity and that is why a new moral imperative is imposed, together with an international legislative effort, to free the society of such crimes.

We then returned to talking about the role of women, very active in the Amazon communities and ready to share pastoral responsibilities together with the priests. This was a profound question that could not be circumvented superficially, it was affirmed in the Hall. For this reason, in an intervention it was asked that women be in fact equated with the dignity of men in the ambit of non-ordained ministries, especially as many female religious congregations have been and still are true heroines of the Amazon for the birth of communities in different parts of the region. Even among the auditors, as a result of the different ways they dwell on the experience of consecrated life in the Amazon and on its commitment to the promotion of indigenous vocations, respectful of individual identities and true enrichment for the spirituality of the Church. In particular, the commitment of consecrated women in suburban areas and the versatility of their work was reiterated. Hence the idea of ​​greater recognition and greater appreciation of consecrated women, so that they no longer walk behind, but beside, in the perspective of an ecclesial synodality, far from clericalism.

As for the subject of the viri probati, the Hall is reflecting on why vocations are lacking and why the Church is not able to awaken new ones. One of the intervention proposes to start local experiences of temporary ministries for married men, provided they are recognized and approved by the local Ordinary and the ecclesial community. Another speaker suggests the establishment of a Pan-Amazonian or regional Commission for the formation of future priests, so as to meet the economic difficulties of the individual dioceses and the lack of educators. The importance of the permanent diaconate was therefore remembered.

The Synod Fathers returned, then, to talk about migration: the Amazon, in fact, is among the regions of Latin America with greater national and international mobility. Central, therefore, is the call to not consider the migrant as a mere sociological or political fact, but rather as a theological place to reaffirm the commitment of the Church in favour of justice and respect for human rights, in search of a just economic system and supportive. A Pastoral Care that is attentive to this theme is needed, we still underline in the Hall, a Pastoral Care that is not only a social work, but also and above all a spiritual one, capable of bringing hope and promoting the true integration of migrants.

Furthermore, the Synod Hall refers to the missionary task of the Church, in a region like the Amazon, in which about 38 million people live, including groups of indigenous people who have been voluntarily isolated. The Word of God, must also be proclaimed to them through the language of love and prayer. A coherent, beautiful testimonial, capable of attracting others is needed; the Church must be outgoing, kerygmatic, an educator to the faith; we need to be in dialogue, in order to appreciate and value peoples, fertilizing their cultures with evangelical wealth, because not only projects, but a Person, or Jesus Christ, awaits us. The mission of the Church must also be deminished in the ecumenical sphere, it is said in the Hall, so as to promote together environmental protection, defence of the rights of indigenous peoples and dialogue.

At the end of the Congregation, the Hall gave voice to some auditors: among the topics addressed, the delimitation and protection of indigenous territories, so that they are not expropriated and plundered in the name of mining activities or hydroelectric power plants. The defence of the earth is equivalent to the defence of life: local governments therefore put an end to injustices towards native peoples who are often discriminated against or showcased, not considered as a living culture, with their own customs, languages ​​and traditions. Even the international community must take concrete action to put an end to the crimes perpetrated against the natives of the Amazon, because this region cannot be treated as a commodity. The care of the common home is not the object of propaganda or profit, but a true safeguard of Creation, far from the economic, social and cultural colonialism that wants to modernize the territory by imposing development models extraneous to local cultures. Hence the idea of ​​creating, in the local Churches, a subsistence fund for ethno-ecology or agro-ecology and food security initiatives, beginning with the logic of the Amazon.
at 17:49