General Audience on the outpouring of the Spirit

This morning's General Audience began at 9:05am local time (3:05am EDT) in Saint Peter's Square, where the Holy Father, Pope Francis met with groups of pilgrims and the faithful from Italy and from every corner of the world.

In his speech, the Pope continued the cycle of catechesis on the Acts of the Apostles, adding his meditation on the theme: God shows no preference for anyone (Acts 10:34).  Peter and the outpouring of the Spirit on the pagans (Acts 10:34-36). 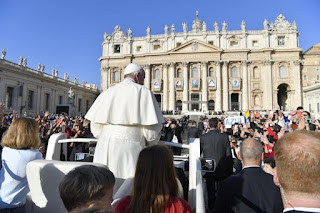 The journey of the Gospel in the world, which Saint Luke recounts in the Acts of the Apostles, is accompanied by the supreme creativity of God which manifests itself in a surprising manner. God wants his children to overcome every particularism and to open up to the universality of salvation. This is the purpose: to overcome particularisms and to open up to the universality of salvation, because God wants to save everyone. Those who are reborn from water and the Spirit - the baptized - are called to come out of themselves and open up to others, to live in proximity, the style of living together, which transforms every interpersonal relationship into an experience of fraternity (cf Apostolic Exhortation, Evangelii gaudium, 87).

The witness of this process of fraternization that the Spirit wants to trigger in history is Peter, the protagonist in the Acts of the Apostles, along with Paul. Peter experiences an event that marks a decisive turning point for his existence. While he is praying, he receives a vision that serves as a divine provocation to stir up a change of mentality in him. He sees a large cloth coming down from above, containing various animals: four-legged creatures, reptiles and birds, and he hears a voice inviting him to feed on those meats. As a good Jew, he reacts by claiming that he has never eaten anything impure, as required by the Law of the Lord (cf Lv 11). Then the voice strongly replies: What God has purified, you should not refer to as profane (Acts 10:15).

With this fact the Lord wants Peter to no longer evaluate events and people according to the categories of the pure and the impure, but to learn to go further, to look at the person and the intentions of his or her heart. What makes man impure, in fact, does not come from outside but only from within, from the heart (cf Mk 7:21). Jesus said it clearly.

After that vision, God sends Peter to the home of an uncircumcised foreigner named Cornelius, a centurion of the so-called Italic, ... a religious and God-fearing man, who gives alms to the people and always prays to God (cf Acts 10,1 -2), but he was not Jewish. In that house of pagans, Peter preaches the crucified and risen Christ and the forgiveness of sins to anyone who believes in Him. And while Peter speaks, the Holy Spirit is poured out over Cornelius and his family. And Peter baptizes him in the name of Jesus Christ (cf Acts 10:48).

This extraordinary fact - it is the first time that such a thing happens - is known in Jerusalem, where the brothers, shocked by Peter's behaviour, harshly rebuke him (cf Acts 11: 1-3). Peter did something that went beyond custom, beyond the law, and for this reason they reproach him. But after the meeting with Cornelius, Peter is freer from himself and more in communion with God and with others, because he has seen the will of God in the action of the Holy Spirit. He can therefore understand that the election of Israel is not a reward for merit, but a sign of the gratuitous call to be the mediation of the divine blessing among the pagan peoples.

Dear brothers, from the Prince of the Apostles we learn that an evangelizer cannot be an impediment to God's creative work, for God wants all men to be saved (1 Tim 2: 4), but God's work favours the meeting of hearts with the Lord. And how do we behave with our brothers, especially those who are not Christians? Are we impediments for their encounter with God? Do we obstruct their encounters with the Father or do we facilitate them?

Today we ask for the grace to let ourselves be surprised by God's surprises, not to hinder his creativity, but to recognize and favour the ever new ways through which the Risen One pours his Spirit into the world and attracts hearts making himself known as the Lord of all (Acts 10:36). Thank you.
Testo originale nella lingua italiana

The Holy Father's catechesis was then summarized in various languages, and His Holiness offered greetings to each group of the faithful in attendance.  To English-speaking visitors, he said:

I welcome all the English-speaking pilgrims and visitors taking part in today’s Audience, especially those from England, Scotland, Finland, Norway, Nigeria, Zambia, Kenya, Malawi, Korea, Australia, Indonesia, Malaysia, the Philippines, Canada and the United States of America. I greet in particular the delegation from the NATO Defense College, with good wishes for their efforts in the cause of peace. Upon all of you, and your families, I invoke the joy and peace of our Lord Jesus Christ. God bless you!
at 08:13